My first revelatory encounter with Patti Smith was listening on the radio in the fall of 1975 around the time of the release of her debut album Horses. WNEW was broadcasting live her concert at New York’s then hip rock club the Bottom Line.

Smith held court with her audience in the Q&A portion of the show. She thinks out loud, picturing her kids (not yet born) years later asking, “Mommy, what did you do in the war?”

She answers her own question: “Mommy was a rock ’n’ roll singer!”

Forty years later, Smith is still a road warrior with her band touring around the world, and much more: a mother of now two adult children; a Rock and Roll Hall of Fame inductee in 2007; and a major long-form author, as demonstrated by her winning the National Book Award for her 2010 memoir Just Kids, about her deep friendship with Robert Mapplethorpe, the controversial photographer.

Smith didn’t have a clear plan about what her new book M Train (Knopf) was going to be about when she sat down to write it. In press interviews, she insisted it was a book about nothing. The “M” could be mental, magical, or mystery train, as so much of her musical art (recordings, live performances) is wrapped up in rock ’n’ roll mythology, such as long-gone heroes like Jim Morrison and Jimi Hendrix.

But even as a child, Smith always mused about the inner-workings of life and the characters she found in books at school, such as The Story of Davy Crockett, which she explains, was for the 3rd graders and off-limits to pip squeaks like herself.

As a young adult in Manhattan, she worked as a sales clerk at Scribner’s, the great bookstore that closed in 1998. “Patti, this is not a library,” one could almost envision her manager scolding her for keeping a patron waiting at the cash register, while she daydreamed perusing the images of great art on the printed page. Smith no doubt took her lunch hour around the corner to Gotham Book Mart, her mecca where she most likely consumed Rimbaud, Camus and Blake, among her literary influences. The store later published some of Smith’s early poetry works, some of which found their way into songs, was published by small presses even before she landed her record contract. 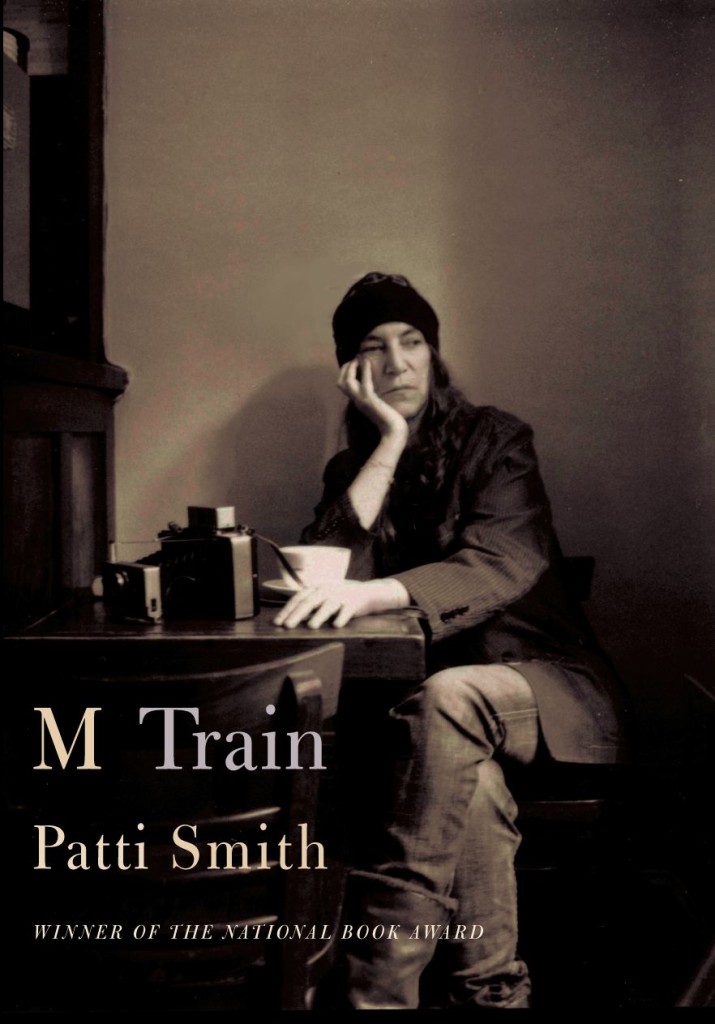 M Train doesn’t really getting into any of the rock music that initially made her famous, and it occasionally delves into her life after her husband’s Fred “Sonic” Smith’s sudden death in 1994. Twenty-one years later, Smith still greatly grieves over the loss of her love of her life, perhaps her widow status gave this restless explorer the freedom to travel the world at will, which is really the heart of the book.

She occasionally references in the book their domestically blissful life together. Recalling when she worked at Scribner’s as a young adult, Smith tells of helping Katharine Hepburn picking out books, and the great actress, whose husband Spencer Tracy died in 1967, commented how “Spence” would have liked it. Smith noted Hepburn was wearing his leather cap. It’s as if Smith filed away in her mind what the perfect couple should be like.

How convenient or prophetic it was for Patti and Fred that they had the same surname when they met in 1976. Leaving behind her beloved New York in 1979 and putting her music career on hold, Smith essentially became a bohemian housewife in Detroit, Fred’s hometown. She happily mended Fred’s clothes, almost out of a sense of duty. As everyone knows, marriage is a series of compromises. Patti learned to share Fred’s love of baseball, and adopted his favorite team, the Detroit Tigers, as her own, as well as his hobby of boating, even though neither could swim.

Upon their first wedding anniversary Fred agreed to take Patti anywhere in the world if she bore him a son (and later a daughter). He sounds like a bit of a chauvinist, requesting that she bear him a son after their nuptials. One would think the feminist nonconformist godmother of grrl punk rock would tell him to fuck off purely for being a sexist, but she did not.

Thinking he’d think she’d choose Paris, Patti chose Saint-Laurent-du-Maroni, French Guiana, on the North Atlantic coast of South America. Why there? Because Jean Genet wrote of the French penal colony as hallowed ground where criminals were shipped before getting transferred to Devil’s Island, although he never went there himself. So channeling Genet, Smith took upon herself to complete his work. 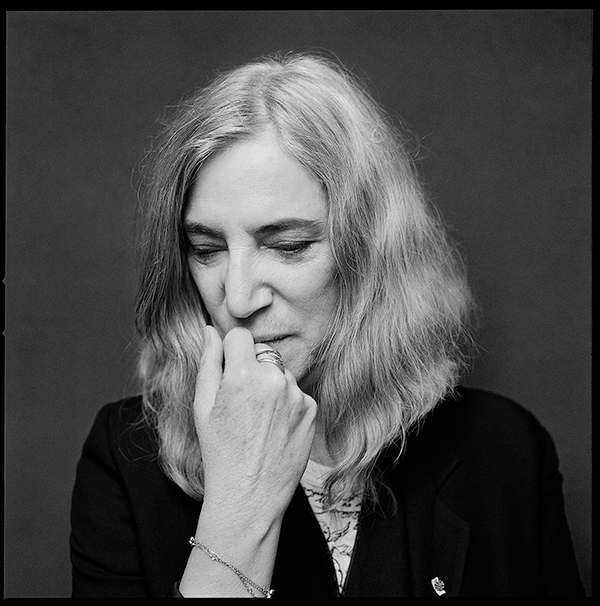 Throughout M Train, she takes similar journeys with vivid detail to photograph the belongings of favorite artists or writers, such as Mexico’s Frida Kahlo and Sylvia Plath, whose grave in England Smith visits, while contemplating in great detail the pain she went through committing suicide.

You learn quirks about Smith, such as she’s a coffee addict (makes her all the more endearing to this longtime fan), and a big fan of television detectives, especially British shows, such as Cracker. She’s on one of her trips – this time London – when the actor Robbie Coltrane, the star of Cracker, magically appears at Smith’s hotel lobby elevator, as if right on cue, and they have a quick exchange.

Back home, she gives life to the mundane. A homeless man asks for all the money in her pocket. She pulls out a twenty-dollar bill and three singles. He hands back the twenty, and she’s on the top of the world, renewing her faith in the world as mostly a good place.

Smith recounts how she paid cash, after working hard for three months, a beachfront ramshackle of a bungalow that she christened “The Alamo” on the outskirts of New York City’s Rockaway Beach. Soon thereafter, her “little house, built one hundred years ago, scoffed at by realtors, condemned by inspectors,” although severely damaged, withstood the wrath of Superstorm Sandy in late October 2012, unlike the homes and businesses of her neighbors and friends, as well as the boardwalk.

Another memorable story is when an airport security guard stops her from boarding with a “holy” rock she fetched from an ancient burial ground because it could be used as a weapon. In the TSA exchange, she forgot to take with her a beloved novel, The Wind-Up Chronicle by Haruki Murakami.

“I took the stone from the mountain and it was taken from me. A kind of moral balance, I well understood. But the loss of a book seemed different, more capricious.”

Reading this book, I think back to that late night in 1975 when I’m a 17-year-old huddled under the covers hanging onto Smith’s every spoken word transmitting through the airwaves and marveling at the power of her music. Her debut album Horses ¬– celebrating its 40th anniversary – had just been released. Is there a more provocative opening line in any idiom than “Jesus died for somebody’s sins, but not mine”?

Just as every song on Horses is transcendental, Smith has written an expressive book that will continue to open new worlds for any reader interested in exploring the works of the favorite writers and artists of a multi-talented artist. She’s no slouch herself in any of the disciplines she toils in. Smith will be 69 this December 30, and she apparently isn’t slowing down any if you look at her band’s gig schedule and book promotion tour. Rock on, Patti!