Syrian refugee Waad, 13, stands inside her tent shelter in Bekaa Valley. Waad, whose father forced her to marry a man she did not know about 8 months ago, now wants a divorce. 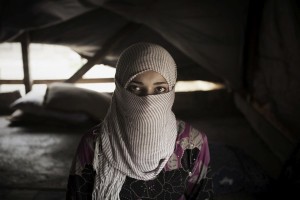 Bekaa Valley, LEBANON. 2015
Waad (13 years old).
She got married about 8 months ago .
Her father forced her to marry. She did not know her husband before the marriage, and now she wants to divorce.
She left Syria (Aleppo) three years ago.
Her father was a taxi driver and she went to school in Syria. Now her family has serious economic problems, she works in the fields for 6,000 Lebanese pounds a day.