A Visit to the Kayany Schools in the Bekaa

I awoke with butterflies in my stomach on that early Friday morning in July. My mother, best friend Carlotta and I were to visit schools for Syrian refugees in the Bekaa Valley, Lebanon.

Carlotta and I, eyelids still heavy from sleep, changed clothes half-a-dozen times: either the pants were too colorful, sleeves too revealing, or shoe brand too visible. Afraid to upset any cultural sensitivities, we settled into sober and concealing outfits.

My expectations rested on a blurry mix of movie scenes, glimpses of CNN news, and awareness-raising images published by various NGOs and UN agencies since the Syrian civil war started in 2011. I could never have known what was truly to come.

Firas Suqi, the program coordinator of the NGO Kayany, picked us up at 9am, and we made way into the ruthless Lebanese aaja’a (Arabic for traffic). Amidst the honking and skillful maneuvering, Firas meticulously explained the mission of Kayany, a Lebanese NGO created almost two years ago in response to the Syrian refugee crisis that provides Syrian refugee children with access to education by setting up schools near the camps—the ITS or Informal Tented Settlements.

After a two-hour drive and a mandatory manou’she stop (flat dough with dried thyme and olive oil), we arrived in the Bekaa, a fertile plain between two Lebanese mountain chains. Unlike the tight, crowded and colorful buildings of Beirut, here the dwellings were of faded color and spaced out, randomly positioned on the sides of wide dirt roads. We drove through the eerily quiet town of Bar Elias, contemplating the still young men hunched against the walls. Firas pulled up on the side of the street and removed the car keys. We climbed out of the air-conditioned car and into the dusty dry heat, following our guide behind a nondescript building. 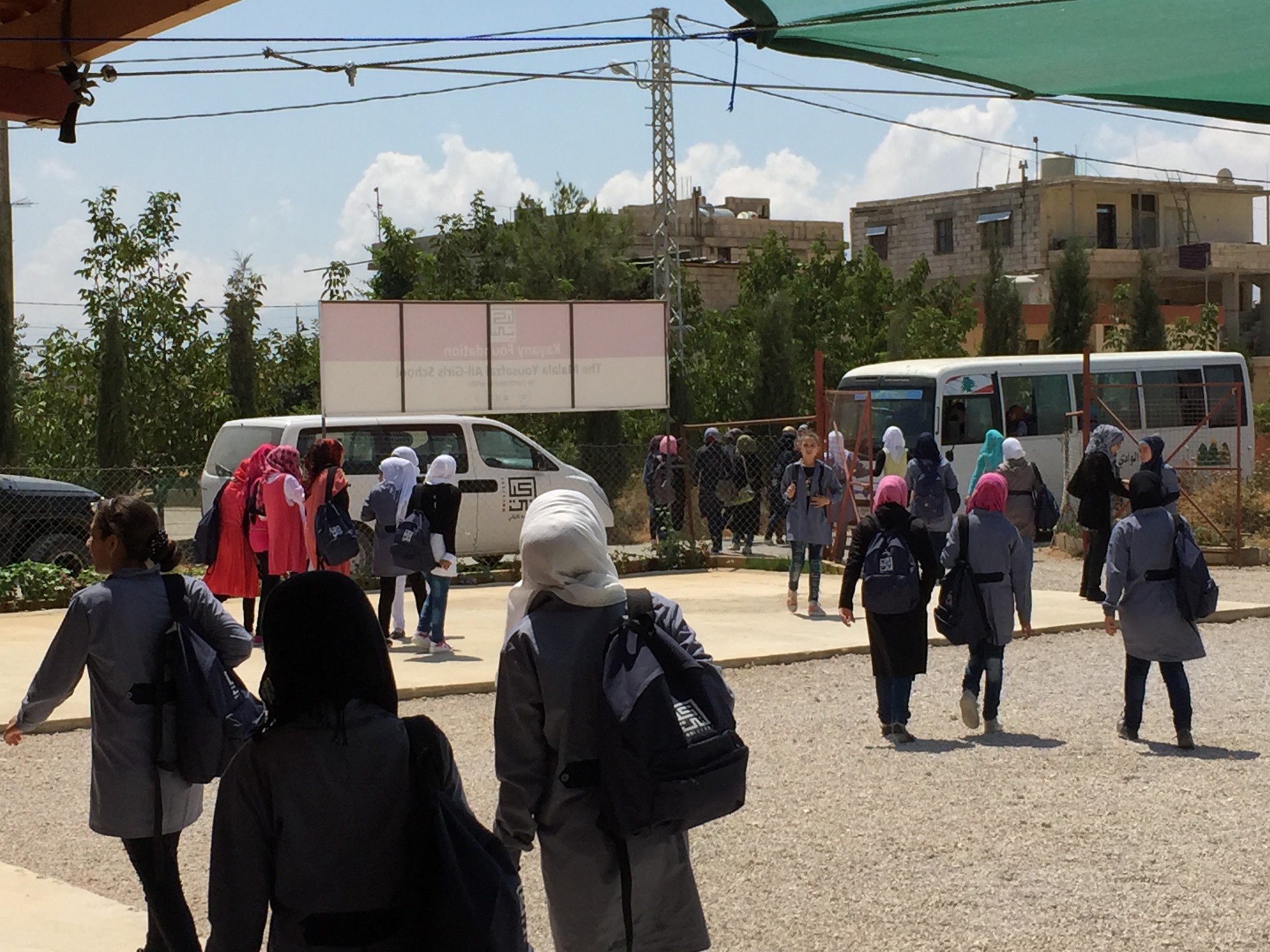 Faint music reached my ears; I lifted my head to listen more intently. Clapping, ululations, singing. Firas turned around, raising his voice as the clamor got louder: “End-of-the-year celebration of the Kayany schools!” We entered the courtyard at the center of the Anhrye school. Loudspeakers boomed out upbeat Arabic songs. The area vibrated with the energy of dancing children within walls adorned with colorful words in the three languages of Lebanon: Arabic, French and English. Women, most often mothers, sat in the audience clapping, enchanted by the sight of their jubilant children. The girls in hijabs did not hide their style, wearing colors, rhinestones, pictures and slogans on their dresses. It was beautifully unexpected to encounter such movement and color, to hear so many high-pitched laughs—I stood paralyzed at the entrance, stunned by the pure joy that reverberated throughout the school courtyard.

After being kindly invited to sit onto comfortable chairs in the front row, we watched with smiles that stretched from ear to ear as the students presented their show. In one scene, a group of ten to twelve year-old girls pretended to write and study before reciting a poem about the benefits of schooling. An impressive thirteen-year-old boy took the stage and eloquently spoke about the misery of war and the nostalgia of life back in Syria. He was particularly touching, expressing himself with such fervor and clarity that he could undoubtedly wind up in politics, if given the chance. Younger children sang about the beauty of Syria and how their longing to return to their homeland. And all through the show, children from the ages of 2 to 17 swarmed around, playing tag, dancing along, or distractedly stumbling into the show before being playfully shooed away by older ones.

The Syrian refugee children shattered my expectations. Knowing that they had lived relatively safe and comfortable lives back in Syria and had been traumatized by a brutal civil war and subsequent uprooting, I imagined despair and frustration as ruling emotions among the refugees. Furthermore, I had learned during an internship at the UNFPA (United Nations Population Fund) in Beirut about many Syrians who suffered from lack of acceptance and social isolation, and even witnessed in the streets of Beirut a few condescending exchanges between Lebanese citizens and Syrian refugees. I therefore expected hostility and even aversion on the part of Syrians towards their Lebanese hosts. Yet the group of Syrian refugee children celebrating the end of the school year with their families and mostly Lebanese teachers was contrary to such assumptions, and I’d never been so happy to be proved wrong.

The very instant I stepped into the courtyard of the cheerful Anhrye school, all my assumptions were proved wrong. The group of Syrian refugee children celebrating the end of the school year with their families and mostly Lebanese teachers was a moving sight. If they still can rejoice, I thought, it means their experience in the Kayany-sponsored schools was a source of joy and this realization gave me great comfort. I took a deep breath and smiled.

After witnessing the celebration at the Anhrye school, we drove to another school run by Kayani in the Tiliani area. As soon as we stepped out of the car, children came running toward us. A little girl, about six years old, flung herself around my legs. Her name was Fatmeh—beautiful, sparkling green eyes and skin that was, like many other refugee kids, damaged and scarred by the sun. She gently took my hand and pulled me inside the courtyard of a second school that was far less colorful, and generally quieter. Its proximity to the informal camp where the refugees reside is a difficult reminder of the fragile nature of their existence.

Fatmeh, so excited to show me how she counted in English, would speed up and trip on her words only to give me a satisfied grin afterwards. When it was my turn to share a few Arabic expressions, her eyes widened and she gave me another enthusiastic hug. Our exchange was far from fluid, but it came naturally to use gestures that made her chuckle uncontrollably when I could not convey a word in Arabic. Fatmeh was an incarnation of purity and innocence, yet she seemed somewhat scarred—each time I would go off in a certain direction, her face would pale and she would run towards me again. When it was time to leave, I had fallen under her charm, and we could not let go of each other. She didn’t cry, but just touched my cheekbones with her dusty fingers, and asked my mom in Arabic why my own eyes were teary. I couldn’t utter a word—my heart felt heavy. We drove off silently to our next destination. 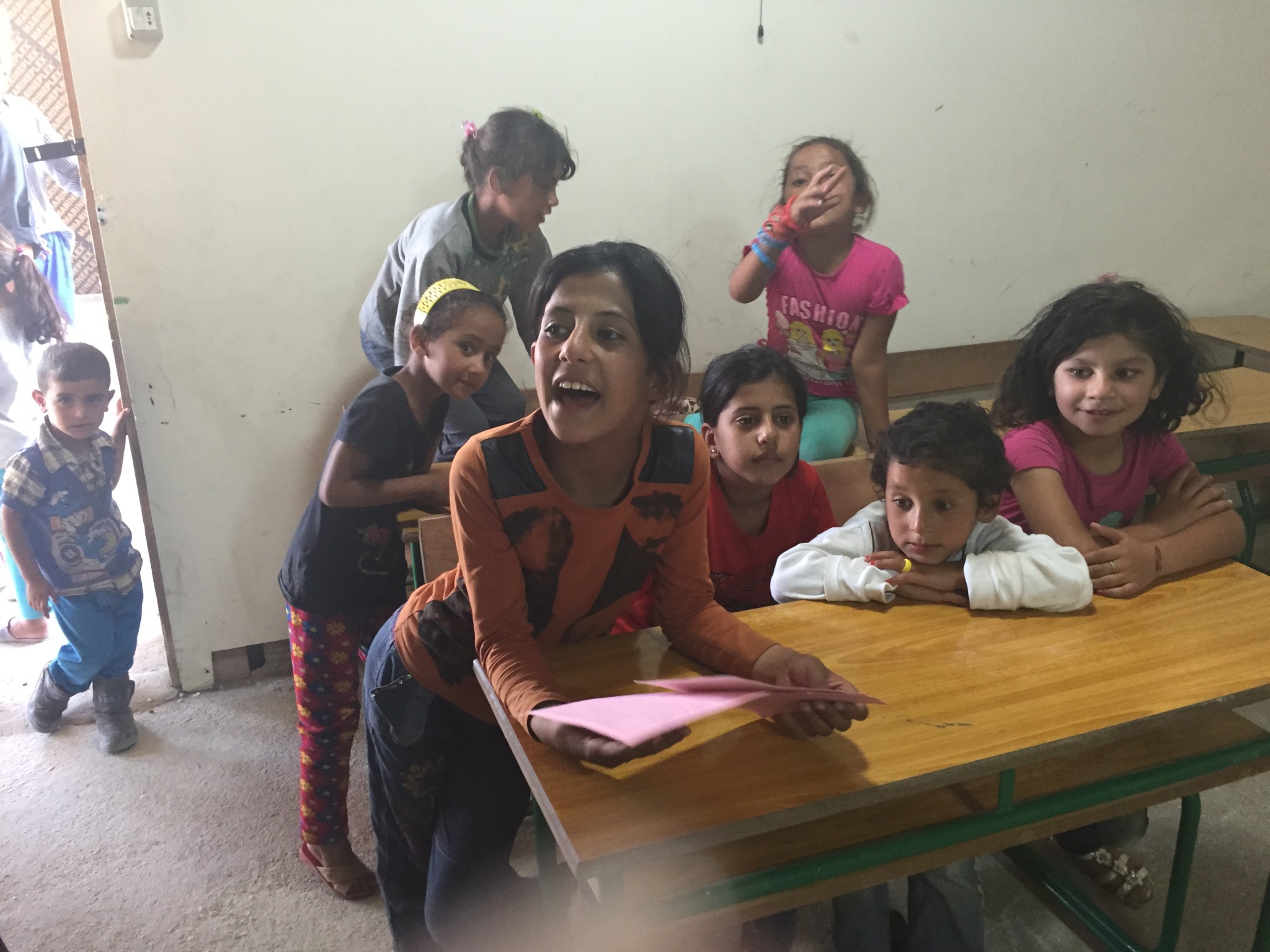 We soon arrived at the newly opened “Malala Yousafzai All-Girls School” in the Bekaa, which plans to provide secondary education to more than 200 Syrian refugee girls from ages 14 to 18. Malala inaugurated the school on July 12, 2015 on the day of her 18th birthday. Funding for the all-girls school is provided by the Malala Fund and in partnership with Kayany. We entered classrooms while in session, and the girls stood up quickly as a sign of respect, smiling at us with wide and curious eyes. How strange it was to see girls my own age rise when I walked in. However, they did seem younger than they were—some had not been in school for the past five years, having all been held back because of the interruption of their school year by the onset of war.

The teacher motioned for one of them, Nour, to show us the drawing she was working on during this after hour therapy-style class. Nour, “light” in Arabic, was a petite and eager 18-year-old who held up her drawing proudly. She explained the symbols of her artwork: the evolution of a dying rose represented Syria, then education being like water restoring life to the rose and a dove flying above the rose representing hope.

After their class ended, the girls grabbed their backpacks and flooded out of the room. I recognized myself and my friends in the way that they teased each other and walked hand in hand. Nour and half a dozen others stayed in the open-air corridor with us. We talked for a while, my mother helping translate the Syrian dialect into English. I was surprised by the girls’ answers when we asked them what they wished to become later on: there were a handful of aspiring doctors—one girl wished to become a pediatrician and another a cardiothoracic surgeon. Nour shared her aspiration of becoming a journalist while her friend wanted to study archeology, and yet another girl was hoping to become a nurse. They were not at the least discouraged by the hardships they had encountered nor the challenges standing in their way. Nour, for one, had obtained her high school diploma in Syria: yet, the documents had been lost and she was forced to repeat her school year again in Lebanon. The girls didn’t speak of the civil war or of their unfortunate living conditions in the informal camps of Lebanon—they did not ask for help. They stood with us smiling, asking us about our lives abroad, laughing about the smallest things. Their joy was genuine, and I could sense that they were elated to be in school. It seemed to give their lives both structure and meaning.

For days later, I thought about our visit to the Kayany schools in Bar Elias. I could very well be in Fatmeh or Nour’s place. They could also be in mine. But fate and mystery made it so that they live in the Bekaa refugee camps and I, in a New York apartment building. Yet stroking Fatmeh’s sun-touched hair or sharing a laugh with Nour, I saw so much similarity amidst our differences.

I finally experienced for myself the human dimension behind the statistics, CNN reports and internet clippings, behind the “sleeping, eating and toiling”—I got a glimpse at the “chatting, laughing, teasing”. Refugees are in the Bekaa Valley of Lebanon, Zaatari camp in Jordan or Kilis camp in Turkey and their children long to go to school and run through a schoolyard just like all others. It may seem obvious that more must be done for Syrian refugee children—easier said than done, yes. But words are my beginning, and we must all begin somewhere.