Barbie’s New Campaign May Be Missing the Point

NEW YORK — Imagine a Barbie who sports red sneakers instead of stilettos, wears a utility belt instead of a purse and vows to save the world instead of being a damsel in distress. On October 8, DC Comics and Mattel, multinational toy company and creator of Barbie, announced their partnered line of Super Hero Girl dolls at New York City’s Comic Con. In a world that only DC Comics and Mattel could create, Wonder Woman, Batgirl and Poison Ivy attend Super Hero High together; fighting the bad guys while overcoming the everyday obstacles of being a teenager. The announcement of the Super Hero Girl dolls coincides with Barbie’s “You Can Be Anything!” advertisement, also released in early October.

Worldwide headlines have praised Mattel’s two new campaigns. Time.com labelled the Super Hero Girl dolls a “game changer,” stating the dolls would appeal to feminists and young girls alike. It is uncertain, however, if the Super Hero Girl dolls and “You Can Be Anything!” ad campaign address the controversies surrounding Barbies and would in fact satisfy feminists and body image experts.

Barbie has been critiqued for her unrealistic and hyper-sexualized body image since her very creation in 1959. Doeschka Anschutz is an assistant professor at Radbound University in the Netherlands and focuses her research on the impacts of toys and television on young girls’ development and self-image. “I don’t feel that these new campaigns are positive steps in light of self-image in women and girls,” said Anschutz over email. Anschutz believes the new two campaigns continue Barbie’s tradition of idealizing thinness. Speaking to the “You Can Be Anything!” promotions Anschutz said, “The message seems to be you can be anything, as long as you are thin, big eyed, big breasted and long legged.”

Critics also take issue with the female stereotypes perpetuated by Barbie. Barbie is typically adorned in pink and even as an astronaut on the moon, wears high heeled space boots. Christia Brown, development psychologist and professor at the University of Kentucky, believes the Super Hero Girl line does not go far enough to address problems of gender stereotypes. “I wish that girls could just be a part of their regular superhero line,” said Brown of the Super Hero Girls. “It still sends a message that we [boys and girls] just can’t interact with one another, and yet, the reality is we do.” Brown’s book “Parenting Beyond Pink and Blue: How to Raise Your Kids Free of Gender Stereotypes” says labelling children by their gender is detrimental to their relationship building and development. For Brown the main problem with Barbie lies with the fact that she is marketed as a girl’s toy and a girl’s toy alone. 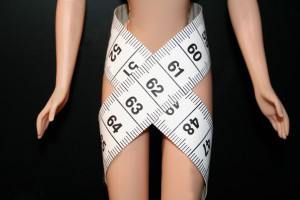 Anschutz and Brown’s findings on Barbie doll play are not unique. A 2006 study by Helga Dittmar and Emma Halliwell indicated that girls who were exposed to Barbie reported lower levels of body esteem and a greater desire to be thin. An additional 2014 study by Aurora Sherman and Eileen Zurbriggen found girls who played with Barbie (as opposed to Mrs. Potato Head) believed they had fewer career options than did boys. So while Barbie’s newest ad campaigns encourage young girls to “imagine the possibilities” and “pursue their limitless potential,” studies show that girls who play with Barbie dolls believe something starkly different.

Barbie’s “You Can Be Anything!” campaign began with a YouTube video, in which young girls pretended to be their dream profession: veterinarian, soccer coach, college professor, business woman. The video begins with the words “What happens when girls are free to imagine they can be anything?” On the campaign’s webpage, Mattel shares Barbie creator Ruth Handler’s aspirations for the doll: “Barbie always represented the fact that a woman has choices.” The advertisement was first released on YouTube on Oct. 8 and was officially published on Barbie’s website by Oct. 27. The ad campaign is marketed strictly for girls, stating “When a girl plays with Barbie, she imagines everything she can be.”

Also released on Oct. 8, was Mattel’s partnership with DC Comics for their line of Super Hero Girl dolls. The dolls will be released in spring 2016, according to DC Comics’ webpage, but games and online stories of the Super Hero Girls’ adventures have been published in advance. The Super Hero Girls maintain Barbie’s unrealistic body proportions.

While studies and experts reveal the negative impacts of Barbie play, consumers tell a different story. “I don’t really have strong emotions around toys,” said Celina Jerman Bright-Taylor. Her daughter, Leona, is 2 years old and currently more interested in her older brother’s dinosaur toys than Barbie. Although Bright-Taylor agreed that Barbie dolls perpetuate a negative body image, she stated that banning Barbie play in her house is not the answer to the problem. “Prohibiting my daughter from playing with Barbie will not help,” said Bright-Taylor, “They [girls] will be exposed to these toys regardless. The most important thing is that you teach your children good values.”

Izabela Piasecka-Latour, mother of two, forms a similar opinion to Bright-Taylor. “You can only screen your kids so much,” said Piasecka-Latour, “Eventually they are going to have to live in this world.” Piasecka-Latour and her husband considered banning Barbies from their house but decided against it. “You don’t want your kid to be the only one who doesn’t have a Barbie,” said Piasecka-Latour, “We should let the kids experience as much as they can and it’s our responsibility to explain, reassure and define.” Piasecka-Latour’s 11 year old daughter, Olivia, has not taken an interest in Barbie. Said Olivia, “I find them boring because all you can do is move them with your hands.”

There are, of course, alternatives to Barbies in the doll market. And for those who still aren’t satisfied with the dolls available in local shopping malls, Wendy Tsao, Vancouver artist, encourages people to refurbish Barbie and Bratz dolls into something more inspiring. “If you could, wouldn’t you repaint a Barbie or Bratz doll into a Jane Goodall or Malala doll for your daughter or niece?” she asked via email. Tsao is the curator of Child’s Own Studio and recently started redesigning Bratz dolls into inspirational women. Tsao has so far created one of a kind dolls of Roberta Bondar, Waris Dirie, J.K. Rowling, Jane Goodall and Malala Yousafzai. Her next project is creating a doll of Diana Crumpy, the first female jockey.

Tsao’s took her inspiration from Sonia Singh, who demonstrated in YouTube videos that it was possible to remove the factory paint from dolls and repaint their faces. “The idea is that if a young child plays with a Jane Goodall doll, she might have conversations about Jane Goodall with her friends,” said Tsao. When asked about Mattel’s Super Hero Girl dolls, Tsao said, “I wonder if there is place for real life role model dolls as well as fantasy figured dolls in a child’s life.”

Brown, developmental psychologist, approves of Tsao’s project. “That’s a great idea,” said Brown. “That’s really what is missing for girls, that there are lots of interesting ways to be girls…they can do something other than look pretty.”

There is no doubt that Mattel has heard the controversies surrounding its Barbie doll. It would be a mistake to assume, however, that these two new campaigns are in any way a response to Barbie’s critics. According to Reuters, Barbie’s sales have declined for the past eight straight quarters. Market Watch further revealed that Mattel’s gross income declined from 2013 to 2014 by 14.73 percent.

Piasecka-Latour believes that Mattel’s new Super Hero Girl dolls are an attempt to get children to develop a relationship with the dolls again. “There are so many Barbies out there and for Olivia, there wasn’t one Barbie that she fell in love with,” said Piasecka-Latour. “Frozen, the movie, is a perfect example of how kids just fall in love with characters,” she said. Piasecka-Latour states that the development of recognizable characters in the Super Hero Dolls then, could work very well for Mattel.

Although the Super Hero Girl dolls and the “You Can Be Anything!” promotions do not address the Barbie controversies surrounding negative body image and gendered stereotypes, Anschutz reminds us that these problems were not created by Mattel. “Barbie sells because we apparently like the looks of Barbie,” she said. Anschutz said society’s normalization of thinness and unrealistic appearances is “not due to Barbie or any other company, but more a result of our nature and interests.”

Even as Mattel’s sales decline, Barbie’s critics demand a more relatable doll. The timing could be ripe for a more realistic looking and less gender stereotyped Barbie. So where is she?