Health and Environmentalism in a Bronx Classroom

Five public housing developments sit within about a one-mile radius of P.S. 55 in New York City’s South Bronx. Although the school is located in the poorest congressional district in the nation, it boasts an innovative and effective science program with an emphasis on the environment, including growing and distributing fresh and healthful food to its students. Started by science teacher Stephen Ritz, it aims to address some of the host of health problems affecting children living in poverty.

According to the Food Research and Action center, a national nonprofit group working to eradicate malnutrition and hunger, low-income neighborhoods frequently lack large grocery stores or farmers’ markets where residents can find a variety of high-quality food, including fruits and vegetables. Instead, they may be limited to shopping at small convenience stores, where fresh produce is limited, of poorer quality, or even unavailable. Healthful food is also often more expensive than less nutrient-rich options.

The developmental and learning challenges faced by children living in poverty, some of which are caused by poor nutrition, can follow them well into adulthood. Children with iron deficiencies can experience cognitive problems later in life, while poor nutrition during childhood is also associated with type 2 diabetes and hypertension. Meeting the nutritional needs of young girls is particularly important, as many have calcium, vitamin D, and iron deficiencies not seen in boys. Providing early instruction about nutrition is crucial, according to Roberta Anding, the director of sports nutrition at Texas Children’s Hospital. “When we have poor nutrition in childhood and it doesn’t get corrected, what you’re really looking at is setting the table for long-term health consequences.”

For the pupils at P.S. 55, most of whom are from low-income families, living a healthy lifestyle doesn’t come easily. Lack of access to fresh produce and budgetary limitations mean that every meal can be a challenge. According to the Center for New York City Affairs, a public policy research institute, 93 percent of students at P.S. 55 receive a free lunch—and this may be the only food they eat all day.

In response to these concerns, Ritz began growing fruits and vegetables as part of his lesson plan— and putting this produce into the hands of his students. However, Ritz hasn’t always been gardening in his classroom. Years ago, while teaching at another school in the Bronx, Ritz casually stored some flower bulbs behind a radiator. During a classroom fight, one child moved to grab something from behind the radiator; Ritz thought the student was trying to retrieve a weapon.

Instead, the child discovered and pulled out some daffodils that had sprouted from those bulbs, and the appearance of flowers diffused the tension. This happy accident was the beginning of an idea that eventually led Ritz to launch the Green Bronx Machine, an urban farming and education program providing organic produce and job opportunities for public school students in the South Bronx. Since then, he has received numerous accolades and awards for his efforts, including being named one of National Public Radio’s 50 greatest teachers. His Green Bronx Machine now plants community gardens all over the borough.

According to Bronx State Senator Gustavo Rivera, the median income of his district, where P.S. 55 is located, is just $26,000 a year. “Many of these kids come from those homes. The challenges that come along with being a working, poor family all flow from there.” Rivera first met Ritz when the senator was trying to jumpstart his own health initiative. In 2011, Rivera and Bronx Borough President, Ruben Diaz, Jr., launched the Bronx CAN (Change Attitudes Now) Initiative, which encourages healthy living and lowering the rates of obesity, diabetes, and cardiovascular disease. To draw attention to the initiative—and lead by example—Rivera publically weighed himself every month while trying to lose 20 to 25 pounds. Ritz, who was at one of these events, also committed himself to losing weight and becoming healthier. However, bringing those goals and practices to the classroom would be more of a challenge given that “some students thought chicken came from the basement of Costco,” according to Ritz.

The produce gardens at P.S. 55 are a significant factor in helping to change children’s attitudes about food and improve their nutrition. “When you have that garden at that school, and you’re digging your hands in the dirt and bringing the food to the cafeteria, you are having a sensory experience,” says Anding. Those experiences help to establish food preferences and choices that last well into adulthood.

Ritz’s classroom at P.S. 55 is a flurry of activity. Former student Darrell Francis, who often returns to volunteer at the school where he first learned to love gardening, is building an indoor greenhouse with Stephen’s wife, Lizette. Francis says that his favorite vegetable to grow is eggplant. In another corner of the room, blenders are connected to and powered by bicycles, which students can earn
time riding through good behavior. The row of bicycles that are used to churn out fresh fruit and vegetable smoothies are the perfect illustration of Ritz’s commitment to environmentalism and encouraging children to play an active role in making healthful choices. And as Ritz says, “Healthy kids are at the center of healthy schools.”

Parents have taken note of Ritz’s innovative approach, including after-school cooking demonstrations attended by students and their parents. Sheniqua McNeil has a child at P.S. 55 and participated in one of Ritz’s cooking classes. The parents and their children made a vegetarian chili, and all of the parents left with the recipe. McNeil was impressed with the students’ level of involvement in the cooking process. “The kids got hands-on, the kids were chopping with a safe knife. It was really cool,” she says. McNeil added that in a neighborhood without a lot of nature, having vegetable gardens at the school is an asset to the community. O’Sheena Hinson, whose
daughter will start at P.S. 55 next year, also praised the program and hopes that more parents will become involved.

Providing low-income children with access to healthful produce, growing food in a responsible way, and cultivating a greater sense of community are all part of Ritz’s approach. His latest project is the creation of a National Health, Wellness and Learning Center at P.S. 55, which will include an indoor farm and kitchen facilities to produce 100 bags of fresh produce a week. As the website of the Green Bronx Machine states, “We believe that healthy students help drive healthy schools, and that healthy schools are at the heart of healthy communities.” 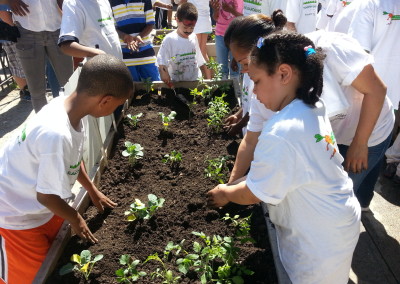 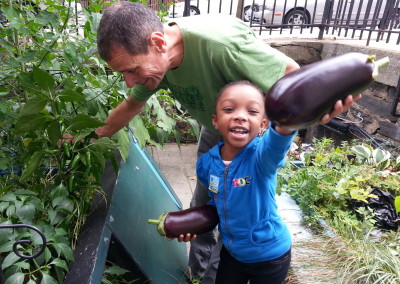 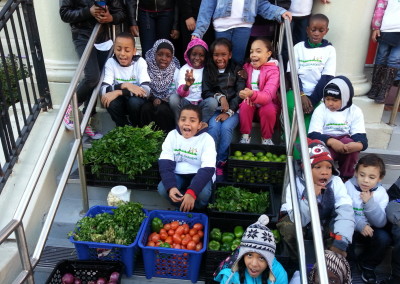 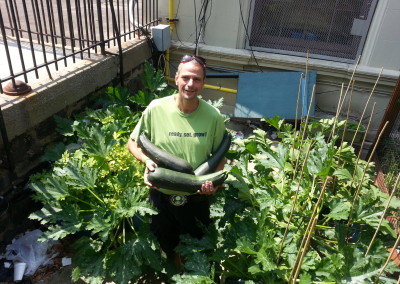 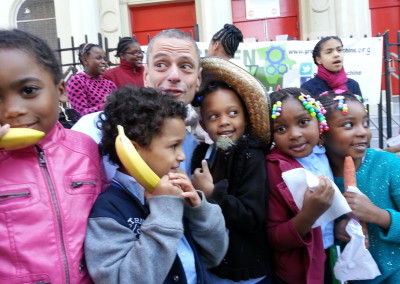 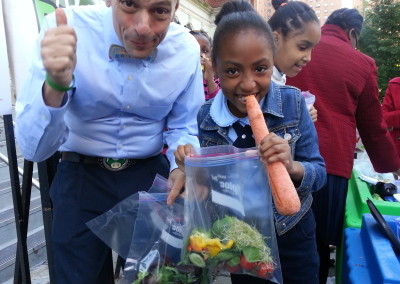 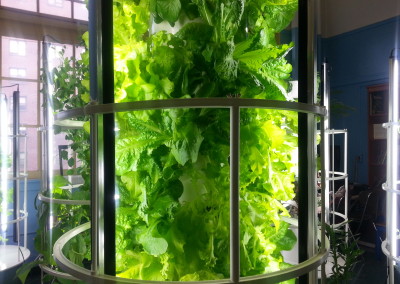 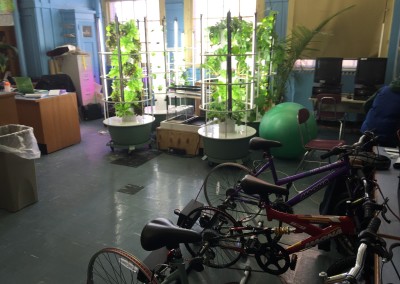 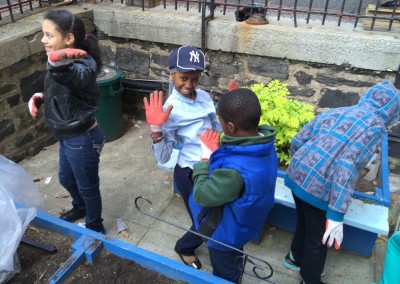 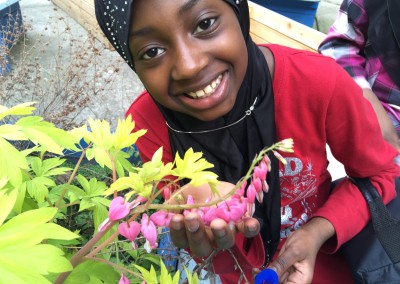 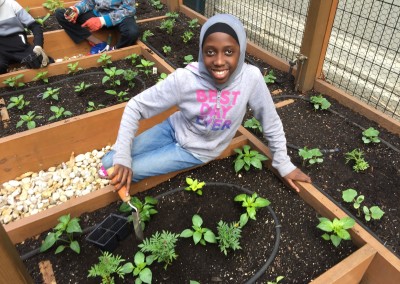 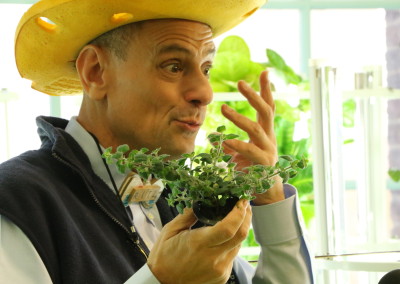 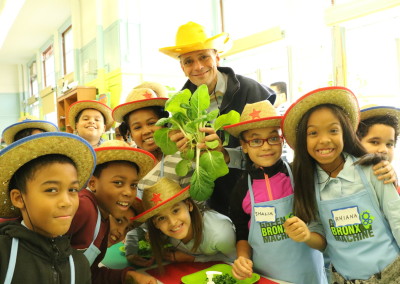 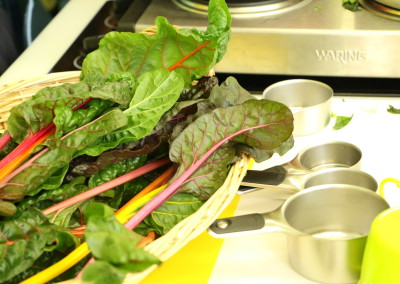 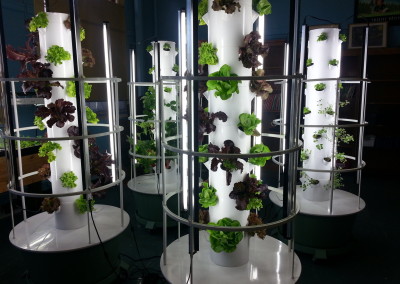 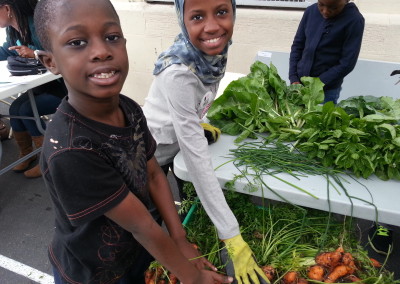