Founder of Girls for Fortune

Mariam Savadogo was born in Abidjan, Ivory Coast in 1984. In 1992, she moved to Burkina Faso where she completed her university education in 2008. After obtaining her master’s degree in Anglophone Studies, she passed the competitive teaching examination, and started her career as a teacher of French and English at Yamwaya Secondary School. In addition to being a dedicated educator, Mariam is passionate about girls’ empowerment. For eight years, she mentored young girls as a volunteer for the organization AMR, and has now founded her own initiative called Girls for Fortune, which is focused on helping girls successfully manage school and life, and become the dynamic leaders their community needs.

Women Across Frontiers (WAF): What motivated you to start your initiative?

My organization, “Girls for Fortune”, seeks to ensure a better and more sustainable access to education for girls. In other words, we try to keep girls in school for as long as possible, despite the challenges they are facing. As a teacher, I develop close relationships with my students, mostly the girls, and I see on a daily basis that most of them are really vulnerable to early pregnancy, getting married off as teenagers, genital mutilation, cultural issues and diseases. The story behind Girls for Fortune is when I came across Sala, a very smart, brilliant girl. She was full of dreams and the one most likely to succeed in her social and professional life. She was one of the most determined students I ever had in my class. But Sala brutally saw her dreams fall apart when she got pregnant at the age of 14, and was forced to get married to an old man who was her father’s age. The girl who had such a promising future and could have been a proof of female success, became a very vulnerable woman, living a miserable and unhappy life with five children she can’t take care of. This experience hurt my heart and I decided to prevent the other girls from experiencing the same misfortune.

My goal is to make sure every single girl has access to a good quality education, that leads to good job opportunities, financial independence and self-confidence.

WAF: What is the greatest challenge you are facing?

The biggest challenge our organization is facing is the lack of financial, material and infrastructural resources to settle as an organization and engage more students in our training programs. All the activities have been self-funded. Borrowing the screening materials, for example, is very expensive and our resources are limited. At this stage, any support will be strongly welcome.

WAF: What is your proudest or most transformative moment?

At this point of my work, the knowledge that we have been able to help over 26 girls change their lives. Twenty-one girls who dropped out of school were able to come back through our advocacy and scholarship support. The other five were able to find jobs after being mentored. “Girls for Fortune” is having a great impact on the lives of its young participants, raises their awareness and teaches them good life skills.

WAF: Can you speak a bit to the importance for women in particular to work together and network?

I think it is very important for women with a common goal to join their efforts to address women’s issues. We live in male-dominated societies where women are faced with gender violence, discrimination, fewer opportunities for success, sexual harassment and health issues. We cannot wait for men to fix them. By working with each other, we can understand and share each other’s experiences and, hopefully, create positive and sustainable change for ourselves and the next generations to come. Co-Founder of The Girls’ Agenda

Matida Komma has six years of experience working in the nonprofit sector. She is the co-founder of a young women-led organisation, The Girls’ Agenda, where she campaigns for the rights of girls and young women in her community. Currently, she focuses her campaign mostly on the elimination of harmful cultural practices, such as advocating against the continuity of female genital mutilation (FGM), arranged/forced marriages, and sexual and reproductive health education for young girls. Matida holds a Bachelor’s Degree in Development Studies with a minor in Economics from The University of The Gambia. Currently, Matida is an Administrative Officer at the University of The Gambia.

Women Across Frontiers (WAF): What motivated you to start your NGO/initiative?

The Girls’ Agenda is a youth-led movement established by the young and for the young, especially adolescent girls and young women, in 2011. The organization came into existence through the ideas of young women who had all undergone some form of violence because of existing cultural norms and values. Out of this experience, we have committed ourselves to advance women and girls’ interests through the establishment of this grassroots organization. For the past years, the organization has been actively involved in youth-led initiatives and worked in the field of women and children’s rights by demanding changes in policies and practices that subordinate women’s status and hinder progress. We have been engaged in awareness-raising campaigns and advocacy on promoting the reproductive health rights and concerns of girls and women by demanding investments in health and girls’ education, the elimination of sexual violence, and combating harmful traditional practices such as FGM and arranged marriages, among others.

My ultimate goal is to be a strong women rights advocate who is able to create change for women and girls in my country so they can reach their full potential without cultural, social and economic barriers standing in their way.  Religious beliefs, the misinterpretation of religious texts, cultural norms and values, unequal economic and political opportunities — all have continuously deprived women and girls of the full enjoyment of their fundamental human rights, especially their reproductive health and sexual rights. So, advocating for the respect of the human rights of girls and women so they are able to live in freedom and with dignity is what I want to achieve.

WAF: What is the greatest challenge you are facing?

The greatest challenge is resource availability—or lack thereof—for youth-led initiatives and community-based organizations. The Girls’ Agenda also suffers from lack of resources, which really affects the continuity of the work we do. In many cases, activities that require extensive funding have to be implemented through the spontaneous support from bigger women’s rights organizations. We’re lucky in that our organization has benefitted from its partnership with those bigger NGOs in funding-specific programs related to their institutional mandates or interests. Donor politics and competition over scarce resources also limit the potentials of youth-led organizations, where funding criteria of external donors are either too bureaucratic or difficult for young people’s organizations to qualify for such funding.

Finally, dealing with a cultural practice that has existed in a society for many generations has been a worthy but risky engagement. The hostility towards individuals and groups who advocate against harmful traditional practices is very high in The Gambia. Cultural norms and beliefs that degrade women’s bodily integrity and independence are still widespread.

WAF: What is your proudest or most transformative moment?

My proudest and most transformative moment was when I was selected, with 999 other fellows from Sub-Saharan Africa, to be part of the Mandela Washington Fellowship program, which is the flagship program of President Obama’s Young African Leaders Initiative. This transformed my thinking, vision and hope in life as I met with Africa’s amazing young generation of leaders who are all doing amazing works in their respective countries to change the narrative of the African Continent. Through the fellowship, I have learned, interacted and networked with people and organizations who are all working towards making the world safer for women and girls. This, I believe, was a transformative moment for me because I braced up to the challenge I face every day and inspires me to work even harder for the women and girls of my community.

WAF: Can you speak a bit to the importance for women in particular to work together and network?

Networking and partnerships are key instruments that women leaders should pursue to help them achieve greater results in the work we do individually.  Connections formed through networking can be useful in widening the research and knowledge base of social campaigns and generating new resources.  My organization does not rely only on the voluntary contributions of its membership but it has been involved in key partnerships with like-minded organizations, such as local media outlets, youth-focused organizations and health promotion organizations. These partnerships have provided us with capacity-building opportunities in project identification, mobilization of resources, and networking with others for the sustainability of our programs. Individuals, groups, and organizations that have developed strong connections with a variety of support groups and allies typically are more able to achieve their objectives. I believe in interacting with people because you learn from them and they, in turn, learn from you. 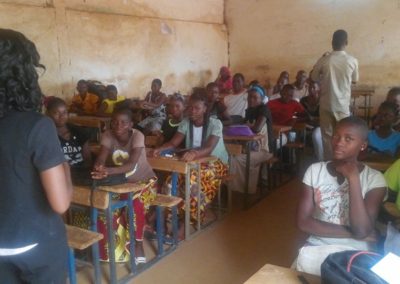 Mariam giving a presentation about climate change in front of members of girls for fortune. Photo credit: @AkosuaBonna Photography 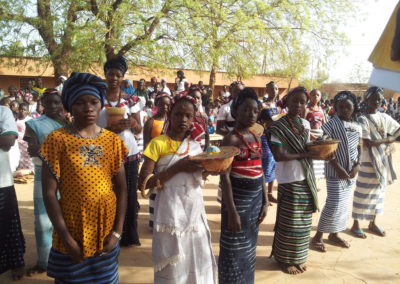 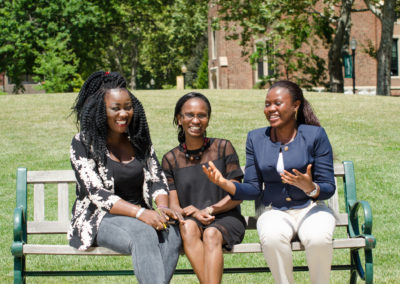 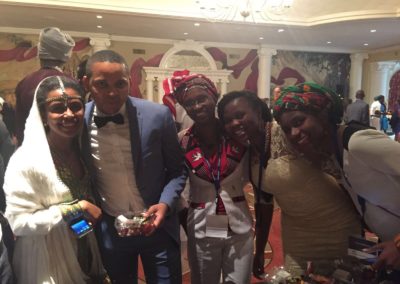 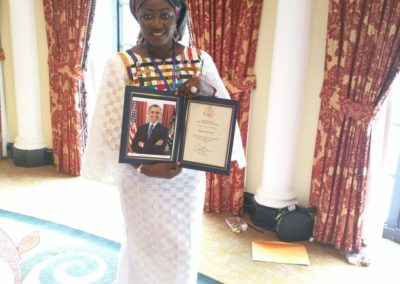