Welcome to the first episode of Listen, Ladies, featuring interview with Desiree Wood, President and Founder of REAL Women in Trucking. This interview has been condensed and edited. To listen to the whole interview, download it here.

Listen, Ladies (LL) : For the first episode of Listen, Ladies, we timed this with a new issue of Women Across Frontiers. The theme is women in male dominated fields.

When you think of women in male dominated fields, a lot of the time you’re like “okay we’re talking about the tech industry or Wall Street.” And yes that’s true, but we wanted to take things in a different direction, so we spoke with a female truck driver. Not only does she have this day job where she is driving across the country, but she also faced a lot of challenges and realized that she wanted to bring women just like her together. As truck driver, Desiree Wood is often on the road about 3,000 miles per week so you might think it really doesn’t matter that women are in the minority when it comes to the trucking industry because it looks like a pretty solitary work, but Desiree quickly learned that that’s not the case, and instead of quitting or remaining silent about the challenge and discrimination she was facing as a female truck driver, she took on what seems like another job entirely. She started an organization called Real Women in Trucking. It’s a place for women just like her to come together, share their stories and press for change together. Desiree Wood, thanks so much for joining us.

Desiree: You’re welcome. Thank you so much for inviting me. 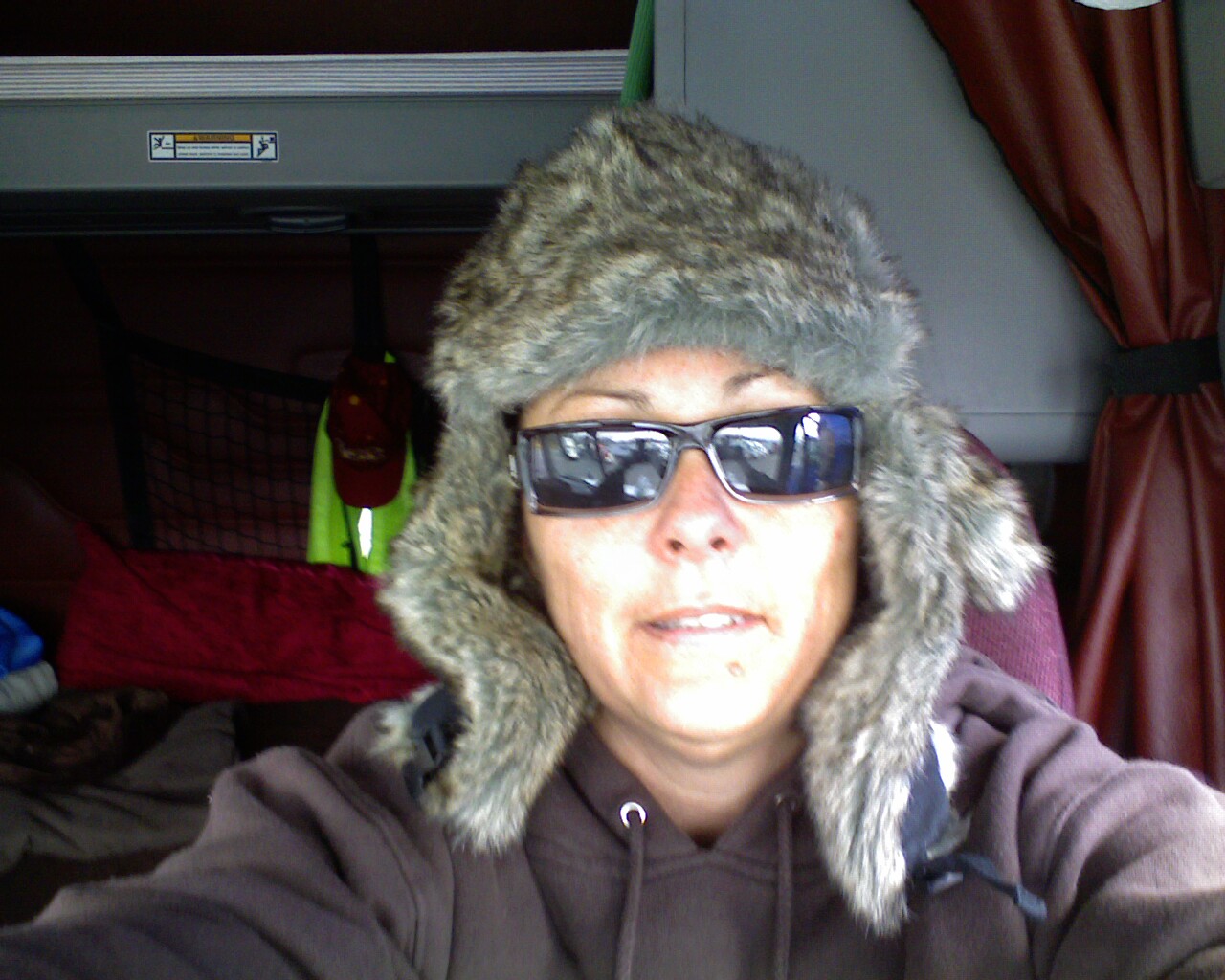 LL:We’re so happy to have you. So, the first question, when I first spoke to you over the phone, you told me numerous times that you really love your job and you loved it from the beginning. Why do you love it?

Desiree: It’s such a different kind of work environment for me. I really did not ever fit well in an office environment. I like moving around for my work. Being outside, seeing outside, looking out the window. So, what better office than to have than one that’s this big huge window that’s ever changing views?  There’s such a deep sense of accomplishment that you feel when you deliver a load or pick up a load. Especially, every trip has got its issues. There’s always something that’s going on, obstacles to overcome, whether it’s the weather or the traffic. There’s just different situations that come up and you just feel like you really actually did something when you get that load where it’s supposed to go safely.

LL:Yeah, what is your yearly schedule like for someone in your job?

LL: I’d like to get into how you’ve got started in your career. When Julia and I were doing some research, we found that in sales workers and truck drivers employed last year, just six percent were women. That’s only about a one percent increase from 2008. Did you know that when you got started and would it have bothered you if you did?

Desiree: I didn’t really look at any statistics. I’ve become aware of them over time and I’ve actually communicated with the Bureau of Labor Statistics. I don’t really think that the numbers are accurate. I think that there’re a lot more women out there than those numbers show. Still, it is a small percentage in comparison to the men. I didn’t really give a lot of thought about it because I know I’m a hard worker, I learn quickly with the right teacher, and I figured that if somebody gave me a chance then they would see that right away. So I wasn’t really focused on that when I entered. It wasn’t until I got into it that I started seeing some of the things that were going on that I thought that there were maybe other issues that were making those numbers stagnant. The entry-level jobs, they’ll let anybody in, but most of them don’t make it. Most of them are out of the system in the first three to six months. There’s really really high turnover.

LL: What is the training like for someone getting into truck driving and I know you faced a lot of challenges in that process, so could you just tell us a little bit about what people might be facing when they get started?

Desiree: Well, first there’s a lot of misinformation on the Internet and there is a lot of misinformation from the recruiters that try to lure people into the trucking industry. There’s also a mainstream media that kind of latches onto this kind of truck driver shortage story that the trucking lobby likes to put out every few months and everybody jumps right on it and says, “Oh there’s a truck driver shortage and they are welcoming women too, like yay!” It’s sort of a ploy to kind of bait people to get into truck driver school and these schools; they are in business to make money off the tuition. They either make it cash out of your pocket, high interest guaranteed student loans that are non-dischargeable, and tuition programs that get people back in the workforce. The taxpayers don’t really know that they are funding this mess. So these people go to these schools we call CDL mills. A lot of them, they are three or four -week courses. They rush you through the program. You really don’t learn anything and then they let these recruiters come in to sell you a bill of goods. They basically tell you, “yes, you know it’s great,” and then you get out there thinking “I didn’t really learn anything, I only drove around the block a couple times, I really don’t know if I should be operating this on the highway.” It’s very irresponsible. You’re under the impression that the next person that you meet is going to be the real trainer and then you come to find out that they put you on a truck and you’re moving actual team freight with somebody who is supposed to be training you, but they’re actually sleeping in the back and you’re driving and you really don’t know what you’re doing.

LL: Tell us about Real Women in Trucking. What made you decide to found that group?

Desiree: Well, in my personal situation, what I encountered was this team-driving situation. I was on ten trucks in six months with a lot of people that were unsafe, including my trainer who was using prescription medications and operating the trucks and she was a female. At one point, I thought she was going to OD in the back. I didn’t learn enough to pass.  I had a second trainer that helped me pass, was on a truck that a guy was harassing me, just prying into my personal life, about my personal relationships and then got very hostile towards me when I kind of let him know that that’s not going to happen. I had bleach thrown on me, I was left in the dessert, I was yelled at, I was intimidated, I was retaliated against for reporting it. They say, “Oh we have an open door policy. We want to know,” and then you write this whole thing and then that goes in the garbage and the target is now on you. I didn’t want to have a lawsuit. I wanted to drive and so I took to social media and within nine months my story became the basis for Dan Rather’s investigative reports into truck driver training and the trucking industry and I had joined a women’s trucking organization that was pretty new at the time and went to them seeking help basically and what I got from them was stalked on the internet, intimidated from them, told not to talk about this, told by senior level women that I should keep my mouth closed and the best thing for me is not to talk about it. I was learning that this was happening at other carriers that had the same business model and it was a widespread problem that had gone on for decades and eventually, what I did was I really put it to this other president of this organization to say, “are you going to choose me, a driver or are you going to choose one of these corporations that’re funding you?” She revoked my membership, I still have the letter and I never cashed the check she sent me, I had talked to a female producer at Dan Rather and she said, “ I think you should go on your own,” and I did. So, we did Real Women in Trucking and shortly in that timeframe I learned about a coalition of women truck drivers that existed in the late seventies and this was one of the same issues they fought then, what they call the sleeper test where they put you on a truck with a man you’re not related to and you’re supposed to drive with them and of course all of these things happen and you’re the first one to go. These are all the same problems that we still have today. That’s really how it all began. I want this industry to realize they hurt a lot of women and the kind of women they hurt are vulnerable women, women like I was. I was coming out of homelessness; I was coming out of a four-year depression and I didn’t have anywhere to go. I needed this job.

What advice would you give your younger self? What do you tell younger women drivers?

Desiree: I don’t think this is a job for a young person because you still want to have some sort of a social life. This is a hard job for relationships. I mean, this is a marriage killer. You’ve got to be comfortable being alone. It is not smart to be wandering around, letting people know that “yeah I’m a truck driver. That’s my truck over there. I’m here all by myself and got a million dollars worth of televisions in the back. I’m going to go out and have a drink tonight.”  That’s not a very good idea, so you have to have that personality.