The Future of Indigenous Communities: How Women Are Taking The Lead

These interviews with Beatrice Duncan, constitutional and and access-to-justice advisor at UN Women and Tarcilla Zera, Tarcilam, a Quechuan activist from Ayacucho and Executive Director of Chirapaq, were conducted by Maryalice Aymong, one of the hosts at “Listen, Ladies”.

To listen to the whole interview, download this episode iTunes

Maryalice Aymong  (MA): Before we dive into the subject, I’d love for our listeners to get to know a little bit more about you. You have an extensive background and focus on gender rights and also social justice and law, so how did you kind of get to this point? Where are you from? What’s your background?

BD: Well, I’m a native of Ghana, and I’ve always been interested in issues of social justice,  particularly women and girls, and my two areas of focus have been women’s law and children’s law. And when I joined Unicef Ghana in the year 2010 I had the unique opportunity to work on indigenous issues for the first time. And it didn’t take me long to get it—I understood the issues quite clearly because indigenous people come from a background of colonialism, and I’m also a product of colonialism. My country was also colonized before 1957, and I understood immediately what indigenous people have been going through and continue to go through.

MA: What specifically were you connecting with?

BD: The most startling connection was the sense of culture and tradition and beauty among indigenous peoples. The colors that they exude in their dress, and tradition, the way they compose themselves, and their sense of pride their persistency and sense of need to ensure that they are given an equal place in society, that has always spurred me on as an individual, and it has always made a positive impression on me.

MA: That’s very interesting. In my research I found that the UN doesn’t have an official definition for the term “indigenous people.” So I was wondering, for our listeners who aren’t quite clear exactly what that entails, how do you describe an indigenous group? What are the unifying qualities?

MA: This forum is a celebration in part of the ten-year anniversary of the UN Declaration on the Rights of Indigenous Peoples. What led to that document, and what was it designed to achieve?

BD: The UN Declaration on the Rights of Indigenous Peoples was agreed upon as a declaration of the United Nations in 2007 and was a combination of over twenty years of negotiation for the specific rights of indigenous peoples to be recognized. That isn’t or wasn’t to state that indigenous people’s rights were not recognized in other human rights instruments. International human rights law comes in different shapes and forms, The Universal Declaration of Human Rights and the International Bill of Human Rights and even the UN charter actually recognize the rights of all persons. But the UN Declaration on the Rights of Indigenous Peoples for the first time recognizes the collective rights of indigenous peoples. So that is what makes the declaration very special. Some of the collective rights include the right to self-determination, the right to be informed when ancestral lands are going to be possessed for development (this is what we call the principle of free pride and informed consent), the right to these lands and territories and to their resources, and for these territories and parcels of land to be recognized. All of these are recognized collective rights. These lands don’t belong to one individual but to a group of people. , Indigenous people want those group rights to be respected.

MA: I should mention that you were recognized by the Ford Foundation as a visionary global leader in 2011, so congratulations for that. I’m hoping we can start even earlier in your life, going all the way back to your childhood. I know you were born in Peru. So can you tell me a little bit about your community and your experiences growing up?

T: I was monolingual until I was 10. That’s my first issue, and when I went out of the community it was like discovering the world outside. If we use only our language in the community, when we go out we can’t speak with other people, and we suffer discrimination because we are monolingual or because we live in the Andes, in the mountains. It’s very difficult to explain that, in our communities, we are considered people—persons—but when we go out, society looks at us as non-persons, as low class without any rights. 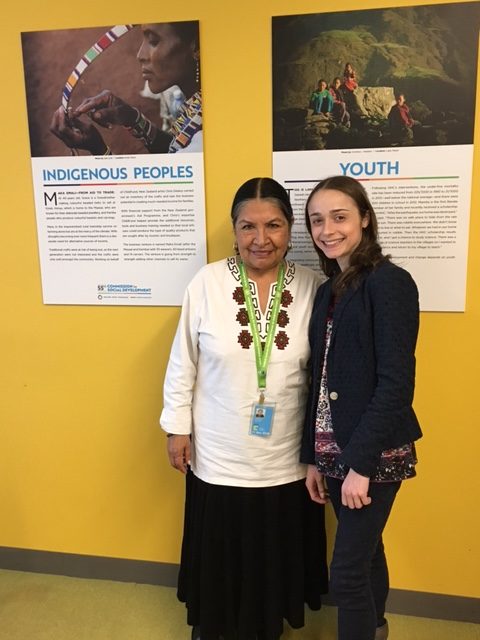 MA: You mentioned that at a young age, you felt like,“ I’m just going to go out there and do this.”  Where did that come from? How did you get that perseverance?”

T: I don’t know why because in many cases, indigenous women or girls, if you don’t have the same opportunities to go to school, to have relationships with other peoples, to be considered as persons in the family, you have only two possibilities: to continue the history of all women without education, illiteracy, many times with a husband, not so pacific and having many children. The other case is that you have to be stronger and to see further than your little space. I wanted to learn how to write and read, and the important thing too is that I had my parents, who were monolingual, and they died monolingual, but they always encouraged us to be better than them.

MA: I’m glad you mentioned that because I was reading an article that you wrote, and the quote that stuck out to me was, “My parents, illiterate as they were, pushed to learn more.”

MA: Could you talk a little bit about how they did that?

T: In the community, my mother was like a person, not like a typical woman who works only in domestic activities. She worked with my father in the camp, in productive activities. She would always say to us, “if you want someday to have a better dress or want to drink a beer, you have to do your part, not waiting for a man or your husband.”

T: That’s the first lesson. And my father always said, “if you have one piece of bread, you have to share between the four of you because we are four brothers and sisters; and in this case, if you make an effort to obtain that bread, you have the right to share the bread, but if you never do anything to have the bread, you will lose your pride and dignity.” As a girl, you can do something with dignity, because if the mother will prepare the food, you can go to carry on the water for the soup and you receive a very delicious food and you’ll be very happy because you did something for, to share that, or to prepare that.

MA: You were involved in the process. Obviously a lot happened between your being a child and having those experiences and then becoming really involved in advocacy. I was wondering what inspired you to sort of try to take action and go back and help your community.

T: In my case, I never think only as individual. I was only thinking collectively: my sisters, my family, or the community. Now we think as global persons, global citizens, and we think what happens all over the world with indigenous women like us? And we have that kind of dream to have a different scenario for indigenous women all over the world. When we talk with new generation, with young women…Now they are trying to learn English, they are trying to be very good professionals, and we said, okay the new generation will be better than us. It’s like a cycle, isn’t it?

MA: I was wondering, what kinds of challenges do you notice that specifically affect girls and women maybe more so than men?

T: Traditionally the indigenous family gives more opportunity to men because they think men have to develop the responsibility as chief of the family and girls don’t need any education. But I think during the last thirty years everything is changing because we know what happened outside of the community. We are trying to obtain better opportunities. And the men are changing, too, in the communities because when you ask the chief of a community in the Andes or in the Amazon, “What kind of future do you want for your girl, your daughter?”, they answer that they want a better life.

MA: It seems like a lot of the change is coming from within the community rather than outside organizations coming in.

MA: I know this is a very busy week, but I just have one final question to wrap up. This event is tied to the tenth anniversary of the signing of the Declaration on Indigenous Peoples. I’m wondering, what’s your sort of takeaway from the two weeks, and also where do you hope that we’ll be in ten years? What kind of progress are you hoping to see?

T: First of all, the declaration is an important international instrument about our rights. We think that in these last ten years, many governments or states all over the world know that we are the subject of rights.  That’s the most important thing. The other thing is that in the last thirty years we began to work as women, and we developed many recommendations and many good experiences in different arenas. Ten years ago nobody believed in our rights. Now we are proud of them. We still suffer racism, discrimination, we are not in the public policies, we have problems with illiteracy all over the world. In the Americas, we are near to 50 million, and if you can see the indicators about poverty, the gap between those with rights and those without or between those who are poor and those who are not is very big. We think it’s necessary to use all these advances, instruments of rights. I was telling young girls that we arrived in New York before New Millennium – Beijing plus five – and we obtained the first recommendation in the second commission of status of women  in this context of Beijing plus five. Explaining that all indigenous women have the right to participate in the formulation of policies related to their rights or issues. That’s historic for us. We – we need to value this kind of victories.

MA: You are an incredibly inspiring woman. I’m so glad that you took the time to sit down with me on such a busy day. This is just going to be so great for our listeners to hear.

T: Thank you very much for this opportunity.