Reporting from West Africa for the New York Times

In this new episode of Listen, Ladies host Maryalice Aymong talks to Dionne Searcey, West Africa bureau chief for the New York Times, about her work and her reporting on Boko Haram.

This interview has been condensed and edited. To listen to the whole interview, download Listen, Ladies in iTunes

Listen, Ladies (LL): How does a piece get from your office to the front page of The New York Times? Do you work on stories and then have to pitch them to New York?

Dionne Searcey (DS): So, it’s kind of like any journalism job. I mean it’s no different that I’m here. I have discussions with my editors, but they are in New York, so they really rely on me to know what’s going on. After you are at a newspaper for a while you sort of understand what kinds of stories work and don’t work. Being at a really big newspaper, there are so many different outlets for work here, everything from the travel pages to restaurant reviews to feature stories to hard news. There is just such a variety of stories you can pitch to different sections. The section that I work for, the international desk, is also increasingly interested in a diverse range of topics and in visual journalism too, photos, videos, Snapchat and Instagram. There are just so many different ways that I think you have to think creatively and broadly and also look at what’s going on in America and see. I think that’s a good gauge of what American audiences or my editors would be interested in. The “Me Too” movement is really big in America right now, so is that playing out over here and how? When the police shootings had a lot of attention, when Black Lives Matter was really at the epicenter of American attention, it’s still a huge thing, but I mean when it was really, really getting a lot of attention in America, I looked at how police shootings and killings by security forces were shaping this part of the world, too. And how people were using social media to post these shootings here as well, and I thought that was really interesting. There was a lot of inspiration gained by the movement in America for holding forces accountable here as well. 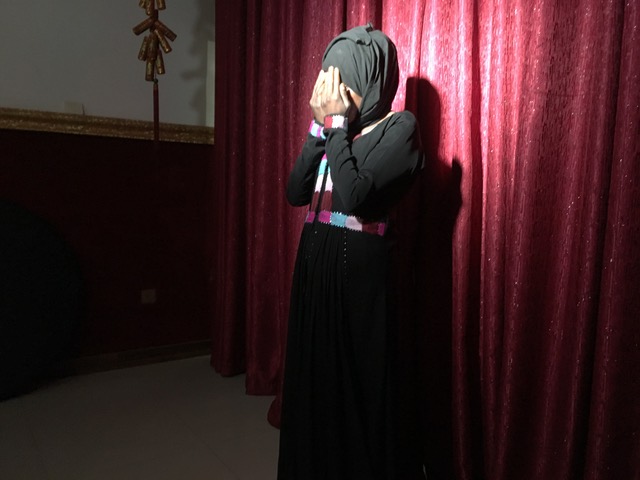 One of the suicide bomber girls

LL: I’d like to shift gears into your reporting on Boko Haram. Many people, when they think of that group, they immediately think of the incident in 2014 when nearly 300 girls were kidnapped from their school in Chibok Nigeria, which obviously drew an international response. But I’m wondering if you can give us a little more context as to who this group is? When it started? What it wants?

DS: This is a group of Islamic extremists who started out really in the early in the 2000’s—before then really—and it slowly built over time. There was a leader called Mohammed Yusuf who was a really charismatic creature, and the movement started out as really a rage against inequality. In the same kinds of things that are happening in America, but in Nigeria there was a lot of government corruption, and there still is. This was a movement to try and ban inequality. To stop the pilfering of poor people by the government and by the wealthy, and it sort of just turned really radical. The police cracked down on this group, they in fact killed the leader, when they took him into custody and things turned really violent and just spiraled out of control. The new leader, once Mohammed Yusuf was killed, the new leader everybody seems to say was a lot more unstable, and it just got really really violent. So what the group wants now is still the same thing, but they are interested in a return to a more harsh interpretation of Islam, in building a Caliphate, in returning things to the way of very harsh interpretation of their religion, and so they are still fighting government forces and the police and military, and it has just become a very violent movement. 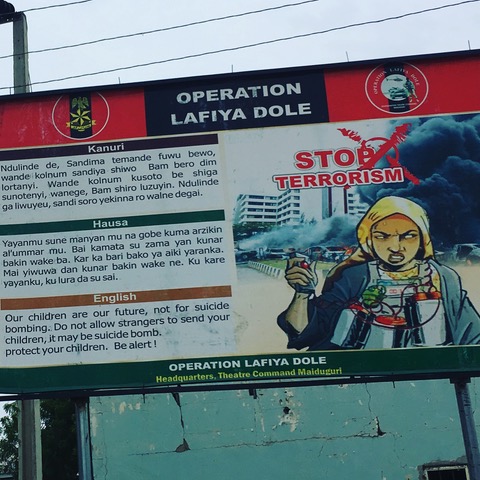 A bulletin board showing how the military portrays bomber girls – as wild-eyed murderers..

LL: I wanted to ask about the piece that you wrote for The New York Times about the eighteen girls who were kidnapped and essentially sent on suicide missions. Given all the stigma that we were just talking about, I’m wondering how a piece like that even came together and how you were able to convince or why these girls wanted to talk to you?DS: I think that their motivations. One girl in particular really stuck out in my mind, she was so forceful in her conviction that she told me, “Listen, Boko Haram strapped a suicide belt to me I didn’t want this to happen obviously. I went to soldiers, I asked them to take it off me because I didn’t want to kill anyone. I’m not a murderer.” She told me that at first she didn’t tell anybody of her story, she was totally ashamed, she was embarrassed and she was worried. She thought she would even be arrested for this or turned in to the military by someone who thought she was a Boko Haram member. But then she got to thinking, and she decided I’m a victim here, I didn’t do anything, this wasn’t my idea, I hate Boko Haram, I’m not a murderer, I’m gonna tell everybody what happened to me. And she was really proud of the fact that she stood up to Boko Haram. And it really struck me that these girls are such heroes. I mean, can you imagine defying one of the most deadly terror groups in the world? And risking your life also by telling the military what is going on because a lot of times soldiers will just shoot you. I mean they are terrified, too. You can imagine being a soldier at a checkpoint and having a girl coming and saying to you, “Oh, by the way, I’m a bomb”  I’ve spent a lot of time in the city where a lot of Boko Haram captives have been released and are living in camps. My sources were just able to track down as many girls as possible. I really wanted to talk to as many as I could to find out what were their motivations, what were they thinking because they were really being cast by the military as these crazy wild-eyed women who were blood killers. That just struck me as absolutely absurd. I mean, what little girl is really going to be excited about blowing somebody up, especially a little girl who has been kidnapped and taken from her parents, and a lot of these girls watched their parents be murdered by Boko Haram when they were kidnapped. Their heroism I just thought was totally fascinating.