Quantum Physics and Classical Ballet? Meet Merritt Moore, Who is Breaking New Ground In Both Fields.

Listen, Ladies’ host Maryalice Aymong interviews Merritt Moore, quantum physicist- with degrees from Harvard and Oxford- and world class ballerina. Moore has performed with world-class companies including Boston Ballet and the English National Ballet. Juggling those two worlds had not been easy, but what’s even more fascinating is Merritt’s efforts to bring them together on the stage through virtual reality and performance art with robots. Below is an excerpt from Maryalice’s interview.

To listen to the whole episode, download Listen, Ladies in iTunes.

Listen, Ladies (LL): One thing a lot of dancers have in common, as I mentioned, is that many started dancing shortly after they began to walk. But for you, science was an interest before dance. Can you tell us a little about how you fostered an interest and a passion for both of these things that you’ve continued on throughout your career? 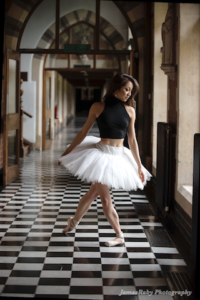 Merritt Moore (MM):  I didn’t speak much as a kid. I started talking when I was three. I was really late. Even then, I did not really talk much. My parents said they could understand what I meant by the way I moved and my facial expressions. But I always loved puzzles. I got in trouble for staying up all night because I wanted to finish a 3-D puzzle. I always loved math. I think when I was 13 I fell into my first dance class. It was maybe “love at first sight,” but I don’t know. It felt really natural in the sense that there was a puzzle and a logic in how the combination went and how the music flowed and everything. I felt that I could express how I was feeling immediately in the most raw and authentic way. I kind of jumbled the two together. Science, math, physics and dance for me is one category because all of these things are non-verbal.

LL: That’s really interesting to hear you describe thinking about dance in the same way might think about a math problem or a scientific experiment. How about the performing aspect of it? It seems as if you are describing yourself as a shy person when you were young. So how about when you got on stage. Was that something that was a little bit different because it’s not an isolating experience where you are just working through things?

MM: Performing is very liberating. I love performing way more than being in a studio. I have to spend the time in the studio before getting on stage, but once on stage there is no holding back. Whereas in rehearsals you constantly have to think, “Well, I’m thinking about the turnout, I’m thinking about correcting each thing, I’m thinking about conserving energy because I know I have to do it ten more times,” once on stage, I give everything. For me, being on stage is something different from being shy. It is my chance to give. I’m giving the audience energy, or I’m giving them a feeling. I’m just giving everything I’ve got. From the tips of my toes to my fingers, my whole body, I’m just giving with everything. There is no holding back, and it’s a very Zen place. I don’t have time to think about critique. I have to switch my brain off and just let it flow.

LL: For a lot of people, they reach a fork in the road at the end of high school. Am I going to go to college or am I going to try and make this dance thing happen? It seems like you had big potential opportunities on both fronts. Can you describe that point in your life? I also read that you tried to make yourself quit dance. Can you talk about the balance and how instead of choosing one path or the other you were able to choose both. 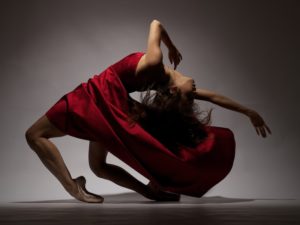 MM: After high school I thought dancing professionally still was not on the table for me. I had done an international competition called Predalezan, but I still thought I could never dance professionally. The decision to go to Harvard was an easy one. When I was 15 I did a school year abroad in Italy, and I ended up finding this teacher who was phenomenal, and I ended up picking up dance again. When I was 18 and going to college, I was fairly late studying physics, I had studied physics when I was 17, my senior year of high school.  I thought that if I really wanted to pursue physics I had to quit dance. When I was 18 I thought I was going to quit dance. It was my second year of collage where I was like, “Oh, my God, I need to audition now, otherwise when I grow up I’m going to regret that I never auditioned and never really tried.” I just went for it. I went to every audition. Every break I had I auditioned. Every break I had I did splits, I was doing homework while doing abs or splits.  I was doing foot exercises during lectures. I was doing abs in lectures, I would sit back in chairs but not touch my back against the chair. I was doing my abs while I was listening, but people couldn’t tell. I went nuts. I got in to Zurich Ballet, and after one year I came back and thought, “Now I am going to quit dance. I’ve had a taste of company life; I now have to focus on physics because my professors say that if I want to be serious, I have to quit the dancing. Everyone is saying that if I really want to do physics, I have to quit dance.” I tried to quit, and my mood went down, my grades went down. It just did not work. Quitting dance didn’t work. So I took it up again and took time off to dance with Boston Ballet. When I came back, I was like, “Now I’m going to quit.” That didn’t work. Then I went to Oxford and I was like, “Now I am going to quit.” I ended up dancing with English National Ballet, so until last year I’ve been constantly trying to just do one, but a part of me has been like, “Society and all my teachers are telling me to just do one.” I would try, but it would not work. Last year I was like, ”I’m fed up. I don’t want to hide from the dance world, and I’m doing physics, and I don’t want to hide from the physics world when I’m doing dance. I’m just going to do both, and that’s that.” I’ve been juggling the two in terms of company life and higher education for the past nine years. And if you start from when I was 13, it’s like 17 years where I’ve been juggling both. At this point it’s just a thing. I’m juggling both.