Stepping Into Politics And Fighting the Trolls In The #MeToo Era

Women are running for office in large numbers in the US. However, there is a long way to go in terms of equality in the halls of congress or state houses across the country. Emma Margolin’s new piece for Politico Magazine provides a unique snapshot of what seems to be the collision of a number of factors:  more women running for office, more organizations ramping up efforts to help women prepare, the #MeToo movement, and the intense polarization that exists in politics today. Emma talked to women in both parties who are eager to run for office but are confronting unexpected and sometimes terrifying threats both online and in person.

Below is an excerpt from Maryalice’s interview. To listen to the whole episode, download Listen, Ladies in iTunes.

Listen, Ladies(LL): Your piece is not about Democratic women, Republican women. It is about women candidates in general. I was hoping you could talk about why that’s an important component for people to recognize from the beginning.

Emma Margolin (EM): Harassment, threats of violence: These are not a partisan issue. They don’t just affect Democratic women. They are really for all women in politics. I really tried to speak to a large variety of women, both Democratic and Republican, about their experiences. I think it’s important to note that this issue does affect women on both sides of aisle because it plays into the underrepresentation problem that we have in American politics. Women make up just 20% of congress, 25% of state legislatures and 12% of governorships. These numbers are bad. They are not bad in terms of whether there are x number of Democrats and xnumber of Republicans. That’s the total percentages of women in politics, that’s bad for democracy. It’s something that we need to pay attention to and that we need to be looking at. Women often don’t want to run. That’s an important part of this piece, too. Research shows that women are just as likely as men to be elected; they just tend to not run in the first place. So looking at this slice of treatment that all women, republican and democrat, is important to understanding some of the reasons why women just don’t want to run for office. 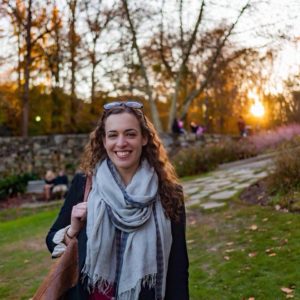 LL: It is obviously a bad thing that it is happening to everyone, but it also means that it’s something that everyone can be a part of finding solutions for and addressing. One thing that has come out in the #MeToo movement is stories about women who left their fields or leaned out because they didn’t want to deal with workplace cultures that were seeming to sideline them. That was the case with one person who is central to the article. Her name is Kim Weber. Can you tell her story and give some examples of what the women you spoke to were confronting?

EM: This woman, Kim Weber, was a big part of why I wanted to write this story. Since the first Women’s March, last year, I started seeing all of these reports of the surge in women interested in running for office.  The narrative was a happy one and rightfully so because of the underrepresentation problem that I just spoke about. But in June of 2017, it was reported that Kim Weber, who was running for congress against Republican representative Steve King in Iowa, suddenly dropped out of her race.  What was really striking about her decision was she released a statement that sighted in part receiving very alarming acts of intimidation including death threats. That got me thinking about the challenges that women in politics so often face, including death and rape threats, sexual harassment, and in some cases even physical violence. And whether those issues would receive greater attention with so many women throwing their hats into the ring. I did talk to Kim for this story, and she elaborated on her experience. The first time she told me she was really scared she was in a work meeting in Des Moines, and she saw her campaign manager, who was a man. He had posted a screenshot of someone who had tweeted at her, “Just wait till the day of the rope when traders like you get what you deserve.” Her campaign manager had made a joke about it, and he thought it was funny. She was really afraid: She’s a single mom, and she just saw a person whom she didn’t know, with no name in the twitter handle, basically say, “I’m gonna hang you.” Later other scary things started to happen to her. She got Steve King bumper stickers in her mailbox. And in the middle of the night someone put a “For Sale” sign on her lawn. That made her think again, “I am a single mom. Someone who doesn’t like me is on my property while I am sleeping.” That’s very scary. Ultimately she decided it wasn’t worth dealing with those kinds of safety concerns just to run for office, which is really sad. That shouldn’t be a part of someone’s decision whether or not to run. I wanted to find out how common those experiences were. I did get to gather some anecdotal evidence for the story. I talked to women politicians in Mississippi, Minnesota, Wisconsin, South Carolina, and Kentucky. They reported such a wide range of abuse. A lot of it happens online. I talked to Wisconsin State Representative Melissa, and she said her support for stronger gun-control measures once prompted her critics to tweet her home address and encourage people to show up and terrorize her and her family. That is extremely trolling if trolling is even the right word.

LL: With online threats it is difficult to know. Who are these people? Are they serious?

EM: Exactly. A lot of it does cross over into the physical world. It only takes one person out of however many hundreds are tweeting horrible things at you to be serious for it to be a game changer for you and for your family. This behavior predates social media. Around 2005, during the first term of Heather McTeer, the first black and the first female mayor of Greenville Mississippi, she got one really horrible letter via snail mail. It threatened to decapitate and rape her. And she told me about another instance when once she was going into city hall and there were little laminated notes of guns all over the steps of city hall, all over the shrubbery outside. These kinds of threats aren’t engaging these women on any kind of policy position. They are just attacking them as women. They are just looking to intimidate them. There is intimidation from voters. One of the Republican women that I talked to for the story was a congressional candidate in South Carolina. She did get numerous threats on Facebook and Twitter, and then in the midst of all that she was at a candidate forum that got heated. This angry man followed her to her car. He was yelling at her and had his finger in her face. It came at a time when she was already hyper sensitive because she was getting all of these threats online. You do not know if that guy is part of the mob online that is threatening you. It is scary. And then it plays into the #MeToo movement that we are having right now. There is a sexual harassment component to this that happens from colleagues.