Young Refugees in Baltimore Taught Me The Lessons of a Lifetime

The first questions I asked myself were, “Why Baltimore?” Why is this “Monumental City,” as John Quincy Adams once described it, a comfortable and prominent setting for refugee women and their children from Asia, Africa, and the Middle East?

As I was rushing through Penn station with my luggage and nametag on my chest, it seemed ironic that, living in one of the most diverse and culturally rich cities of the world that is New York, I should be undertaking a three-hour train ride south to teach and mentor refugees in Baltimore. Knowing that refugees come from such far-flung places as Turkey, Syria, and El Salvador, I wondered whom I would be meeting.  As of June, 30th of this year, the U.S. has admitted only 16,230 asylum seekers out of 45,000 who have applied; since October 1st, 2017, Maryland has accepted only 1.93% of this total. What children—with what stories—would I meet? 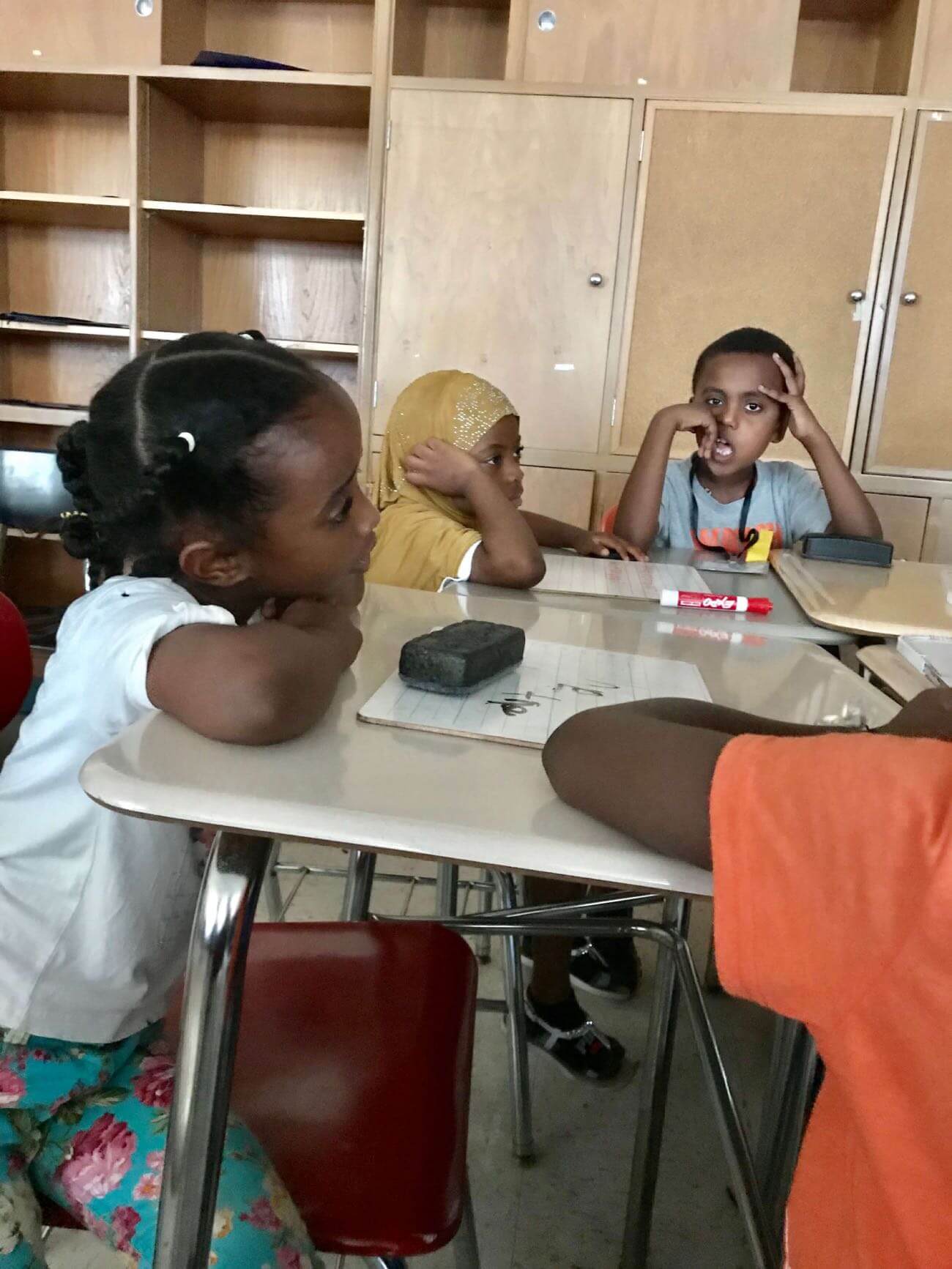 In Baltimore I would be volunteering at the Baltimore City Community College Refugee Youth Project (RYP), a nonprofit organization dedicated to supporting the academic needs of over 150 refugee girls and boys and making their integration into American society as congenial as possible. According to the program coordinator Brittany DeNovellis, most of the kids’ families have been resettled as refugees “due to war, violence, abuse or unsafe conditions, and they had to go through a long and gruesome vetting process required to start a new life in the United States.” These families from Syria, Democratic Republic of the Congo, Eritrea, Nepal/Bhutan, or Sudan have all been resettled in Baltimore because of its low-cost housing, convenient public transportation, and accessible jobs.  The city is also home to the preeminent Johns Hopkins Hospital, which is another draw.

The Refugee Youth Project’s summer program is for 8th grade students that have “refugee and humanitarian migrant status,” according to the US Citizenship and Immigration Service. Since 2012, the summer program’s priority has been to prevent summer learning loss and to help the children adjust to the American school system.  The program lasts two weeks and takes place at the independent Vanguard Collegiate Middle School.

Upon arriving at the program, the volunteers and I were specifically ordered not to establish an intimate relationship with any of the children since we were only staying for a short amount of time. These children have suffered through so much already, we were told, and it would be heartbreaking for them to lose in fourteen days someone they care deeply about.  Denying a child a hug or the chance to sit on my lap or hold my hand as I accompanied him/her to the restroom would prove to be the most difficult challenge of my experience.

The students’ day officially started with lunch.  Thereafter it consisted of two activities: English and either art or soccer- interrupted by seemingly constant trips to the restroom. My duty was to assist one of the teachers in any way he or she needed while sitting with the kids and answering any questions they might have.

Once the clock struck twelve, a wave of hungry children swarmed into the cafeteria and eagerly awaited their meal, which was typically a sandwich or pizza, fruit and milk. During lunch, the kids also enjoyed socializing with one another and talking to the volunteers. Mr. Solomon, an Eritrean refugee as well as the principal of the summer program, would make his daily announcements.  He always said the same two things:  “The program begins at 12 PM and not at 8 AM” and students are “not permitted to bring little siblings along for the day because they are too young for the program.” Some children never paid attention to his speech and continued to talk with their friends while others looked down in shame. Confused and intrigued by this, I asked one of the girls to explain. She told me the bitter truth: When their parents or guardians go to work early in the morning, many have no choice but to deposit their children in the school before hours.  Many cannot afford a babysitter, and they have nowhere else to leave them (despite the constant admonitions by Mr. Solomon).  Thus, in addition to schooling, the program provides daycare (by default). The children amuse themselves by playing soccer in the grass field or games in the playground. 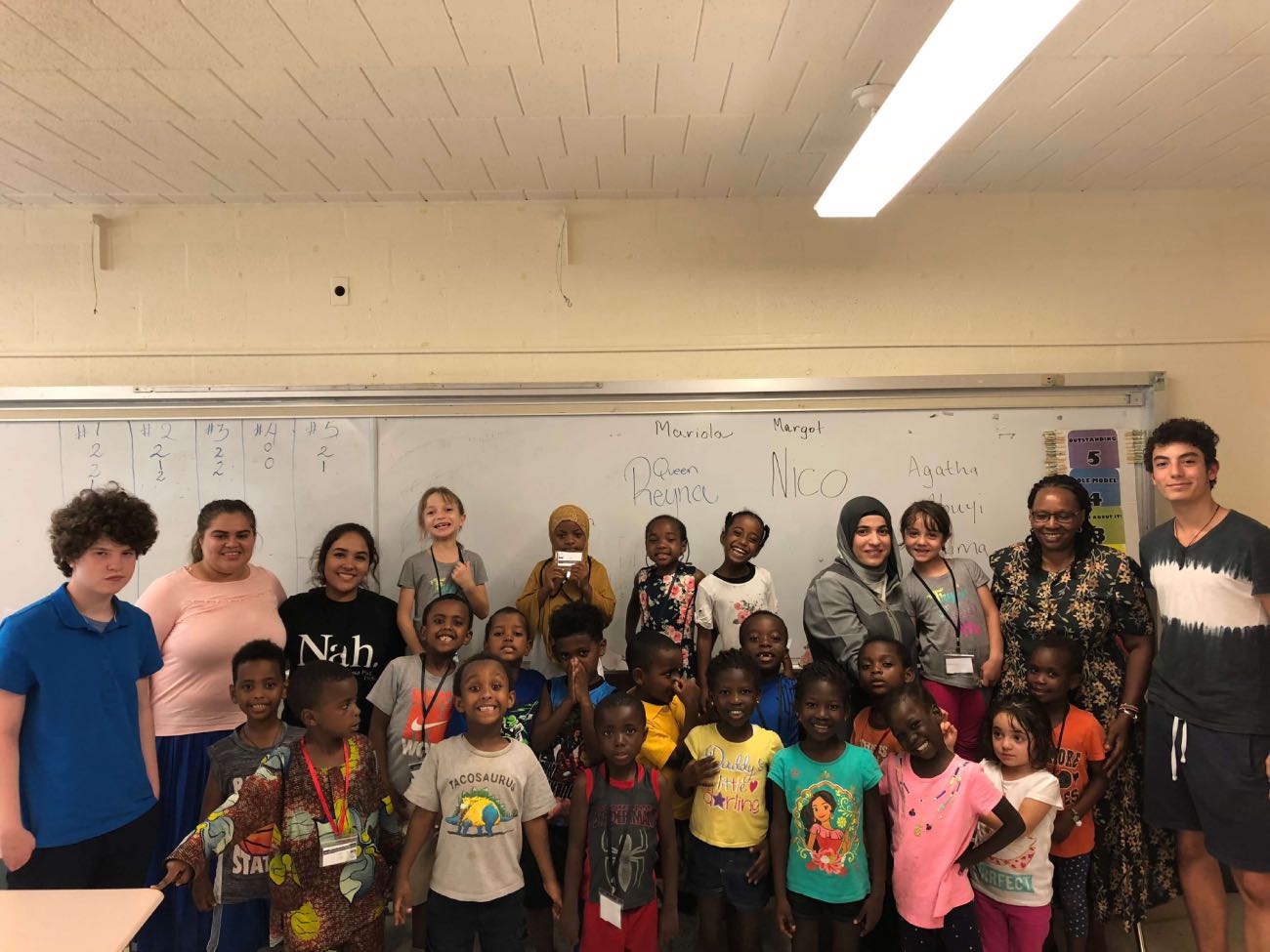 Nico with a class of young refugees at the Refugee Youth Project.

Fadua, a Syrian refugee and a mother of five kids (one of whom I had the privilege of teaching), expressed her appreciation of RYP by mentioning that she “feels safer in the school than outside.” She admits occasionally “not feeling welcome as a refugee” but credits the program with giving her daughters and son the support necessary to achieve a bright future in the United States. She said, grimly, that the hardest thing about living in Baltimore is how different the language and the people are. But she insists that American culture is “good for [her] children.”

In order to avoid any discrimination or bullying by the children, DeNovellis emphasized the importance of “brave spaces.” With caring staff and volunteers, it was imperative to model welcoming behavior and encourage students to try new foods, activities, academic methods, etc.

What RYP cherishes the most, however, is the sundry backgrounds and cultures of the refugees; this gives the students that much more opportunity to learn.

Eight-year-old Yana, whose family fled Aleppo due to war, would agree.  For this aspiring artist, the best thing about going to school is seeing her Sudanese, Turkish and Lebanese friends. She loves meeting new children from around the world because, as she told me, she “makes new friends and learns something new every day.”

If there is one problem the students share it’s the language barrier. Learning English is a main focus for Aarya, an eleven-year-old girl from Sudan. Bilhana and Ditya, also eleven, have been here for five years (their families fled Nepal due to ethnic cleansing) yet continue to find communicating with other girls challenging. 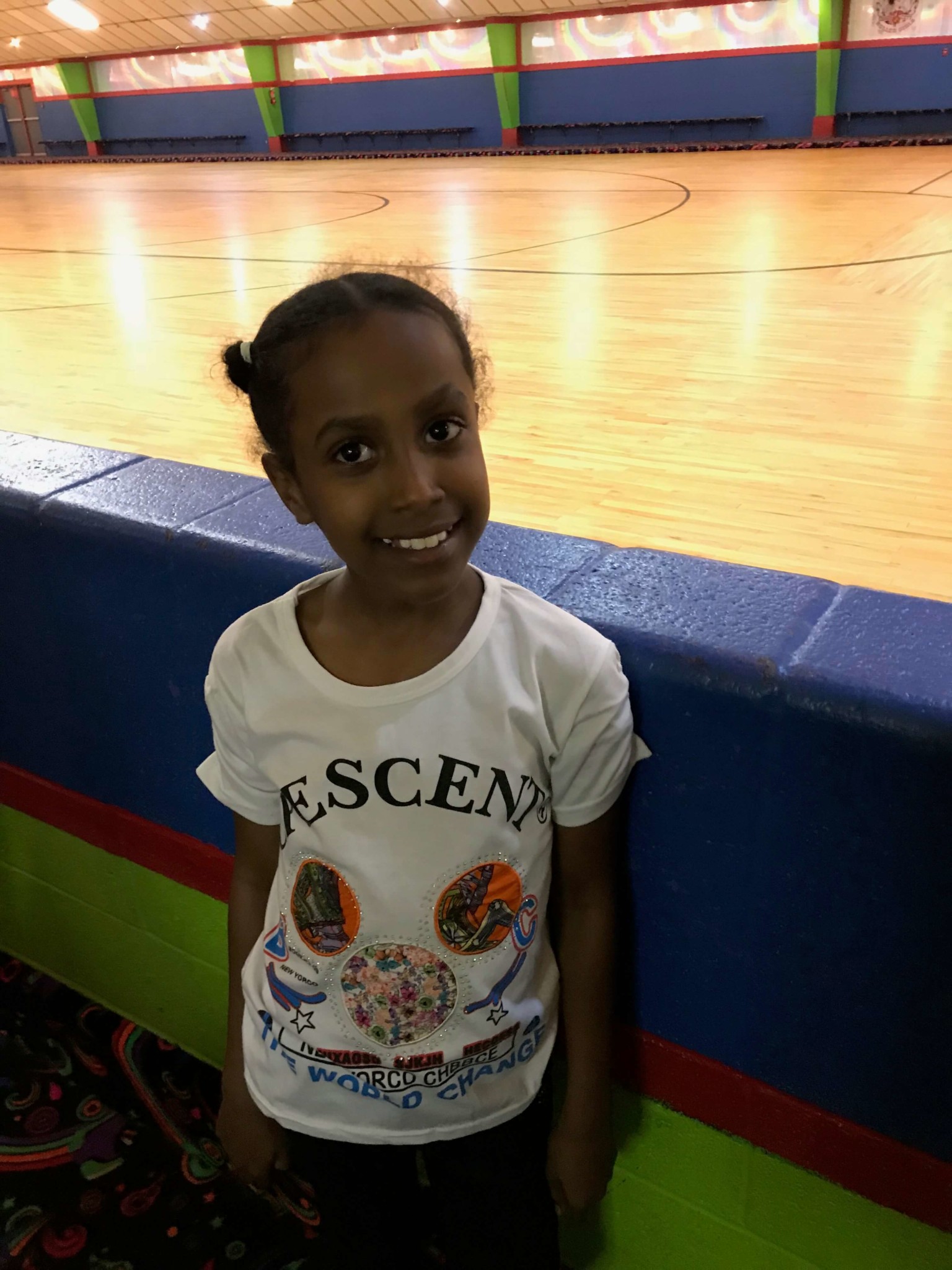 Bilhana explains, “I was born in Nepal and so was my sister, Ditya, and our parents are from Bhutan.  So none of us spoke English when we got here.  That’s made it really tough for us to adjust.” Fortunately, for Bilhana this was a one-time experience. Now, she reports, when she meets new girls from different cultures, she uses “gestures and bravery and [they] instantly become friends.”

What are the longterm prospects of the RYP? According to DeNovellis, not bright. Until now funding has come from an annual federal grant and a couple of small donations. But the federal funds are expected to dwindle thanks to the current administration’s policy. This would definitely have upset me prior to going to Baltimore; but now that I’ve met Fadua, Bilhana, Ditya, Aarya and Yana and other children with so much to offer America (and whose families had nowhere else to turn for relief), I’m doubly concerned. These kids inspired me. In much of America today, the words “refugee” and “immigrant” have negative connotations. And they’re used to stir fear. The Baltimore City Community College Refugee Youth Program proved to me the opposite: These families are not just courageous; they’re exemplary.

*All the names have been changed to protect our participants’ privacy.

Nicolas Szpigiel is a senior at Columbia Prep school In New York.

If you’d like to help young refugees in Baltimore, consider donating to the Refugee Youth Project. Your donation would provide immediate support for refugee youth: