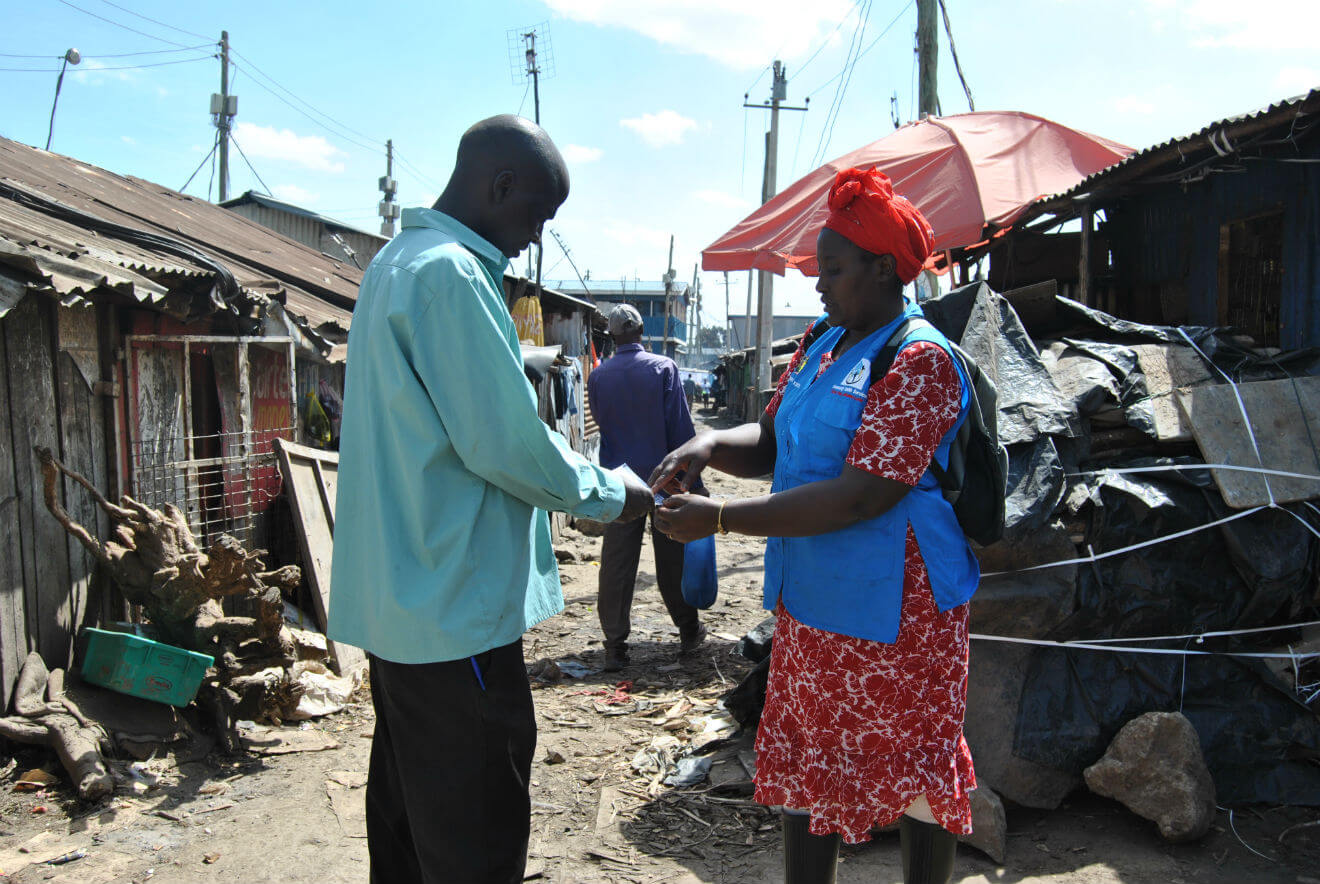 Nairobi’s ‘Gender Defenders’ Use Victimhood to Fight Back

MUKURU, KENYA–On a scorching hot afternoon in Nairobi’s Mukuru Kwa Reuben slums, a few kilometers from the central business district, activity is rife. Merchants are busy selling, residents are busy buying, dozens are just catching up with friends and relatives.

The village is shantytown stretching several hectares. Most of the houses are made of tired, rusty corrugated iron sheets and mud walls. Thanks to a railway, the slums are actually two separate communities: Mukuru Kwa Reuben and Mukuru Kwa Njenga. One resident, 41-year-old Eunice Akinyi, a mother of four, has just had lunch at home. She heads back to her work defending local victims and survivors survivors of sexual and gender-based violence. 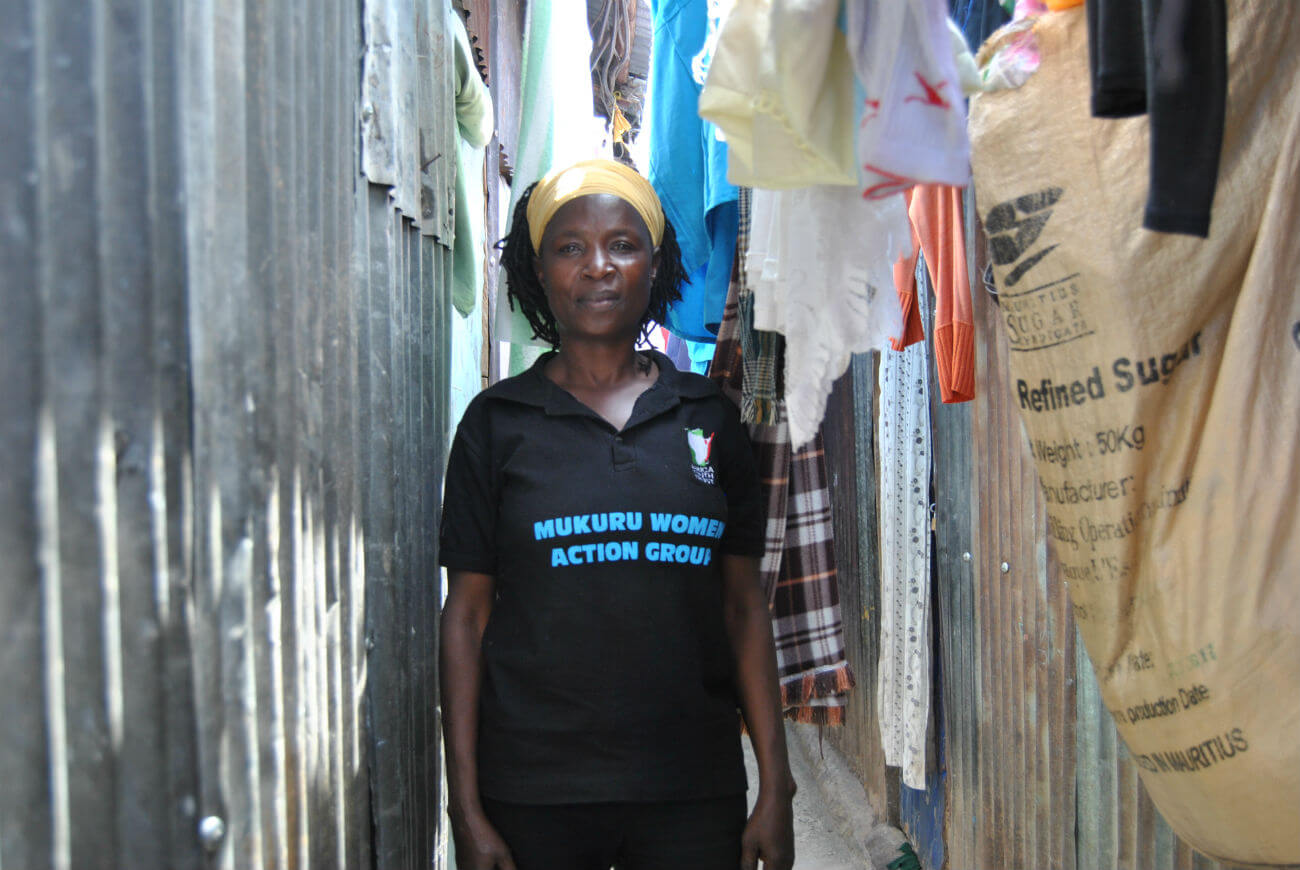 Eunice Akinyi poses for a photo outside her house in Mukuru Kwa Reuben slums before she heads back to work.

“Rape and defilement are normal things here in the slums,” Akinyi says. Married women in the community also suffer from rising domestic violence. In most cases, women do not report this because if they did and their husbands threw them out, they would be unable to support themselves. But those who do go to the police don’t fare any better: Officers routinely take bribes from the local brewers rather than make arrests (alcohol is a big precipitator of GBV); when they do arrest the perpetrator, he is often let go the next day, freeing him to threaten girls and women again.

Akinyi knows this pattern all too well as she was beaten by her husband for years. Indeed, one-third of girls living in Kenya experience some form of sexual violence, and only 10% of them receive any type of professional help.

Wangu Kanja decided to do something about this. When she was carjacked and raped at Nairobi’s city stadium in 2002 and went to the local police to report the crime, officers dismissed her out of hand. “Would you tell your boyfriend you were raped?” they asked. “Why don’t you report something serious?” These questions reflect the terrible stigma against sexual abuse and gender-based violence victims that exists not just in Kenya but throughout the world.

Simultaneously humiliated and furious, Kanja carried the scar of her experience in her heart. From the moment she survived she swore to do her best to ensure that no girl or woman who is abused gets turned away when trying to seek help.

Kanja channeled her outrage by founding a nonprofit organization—one designed expressly to help women such as Akinyi, indeed all Kenyan women and girls. Named simply “Wangu Kanja Foundation,” WKF offers programs to raise awareness of GBV and to prevent it; to provide medical, legal and psychosocial help to victims; to shape public policy as regards sexual assault crimes; and to empower women financially so they have more confidence and resources to confront the society’s patriarchic attitudes that give rise to GBV in the first place.  While most of the outreach is aimed at girls and women, WKF’s programs also engage men.

Kanja is particularly proud of the foundation’s “Gender Defenders” program. Developed in partnership with a like-minded organization called “ActionAid Kenya,” Gender Defenders are survivors of sexual and gender-based violence in the Mukuru slums who provide immediate and follow-up support to other victims. (The volunteers even thought of the name themselves.) The key is an SMS helpline. Anyone who is being threatened—or even feels a sense of threat—simply texts the word “help” to the toll-free line (she can state the crime if she has time), and the operator on duty will call the victim, ascertain her exact location, and dispatch (by text) one of the Defenders to rescue her. The victim will then be taken for medical treatment and testing (usually at the Nairobi Women’s Hospital) before she records a statement with the police and assigned a foundation lawyer to initiate litigation. 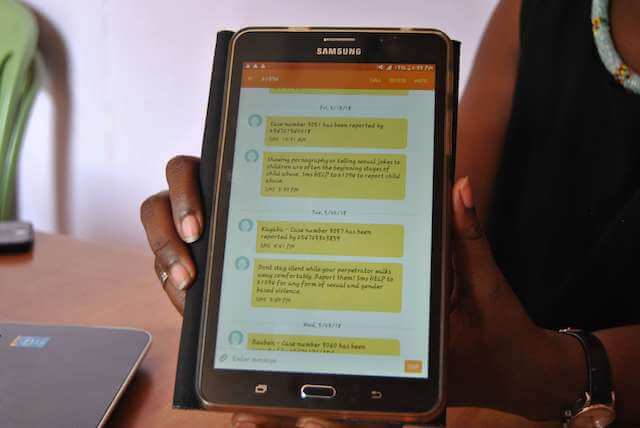 A volunteer at the Wangu Kanja Foundation shows how they receive messages from the the Helpline on her tablet.

The program has tremendous potential. It’s sponsors hope the government will recognize and help realize it: “We’d like the government to adopt the helpline to relieve us of its cost,” said Agnes Kola, coordinator of women’s rights at ActionAid Kenya. “But the government can do so much more. Officials at both the county and the national level could use the data the platform collects to help determine what related social services to provide and how much money to budget for them.”

Katherine Kamau, program assistant at the Wangu Kanja Foundation agrees: “We have evidence that rape and defilement occur mostly in those streets where there are no lights and where women and girls go to fetch water. One would think they would install lights, do other things to make these areas safer, but our call to the government has fallen on deaf ears.” 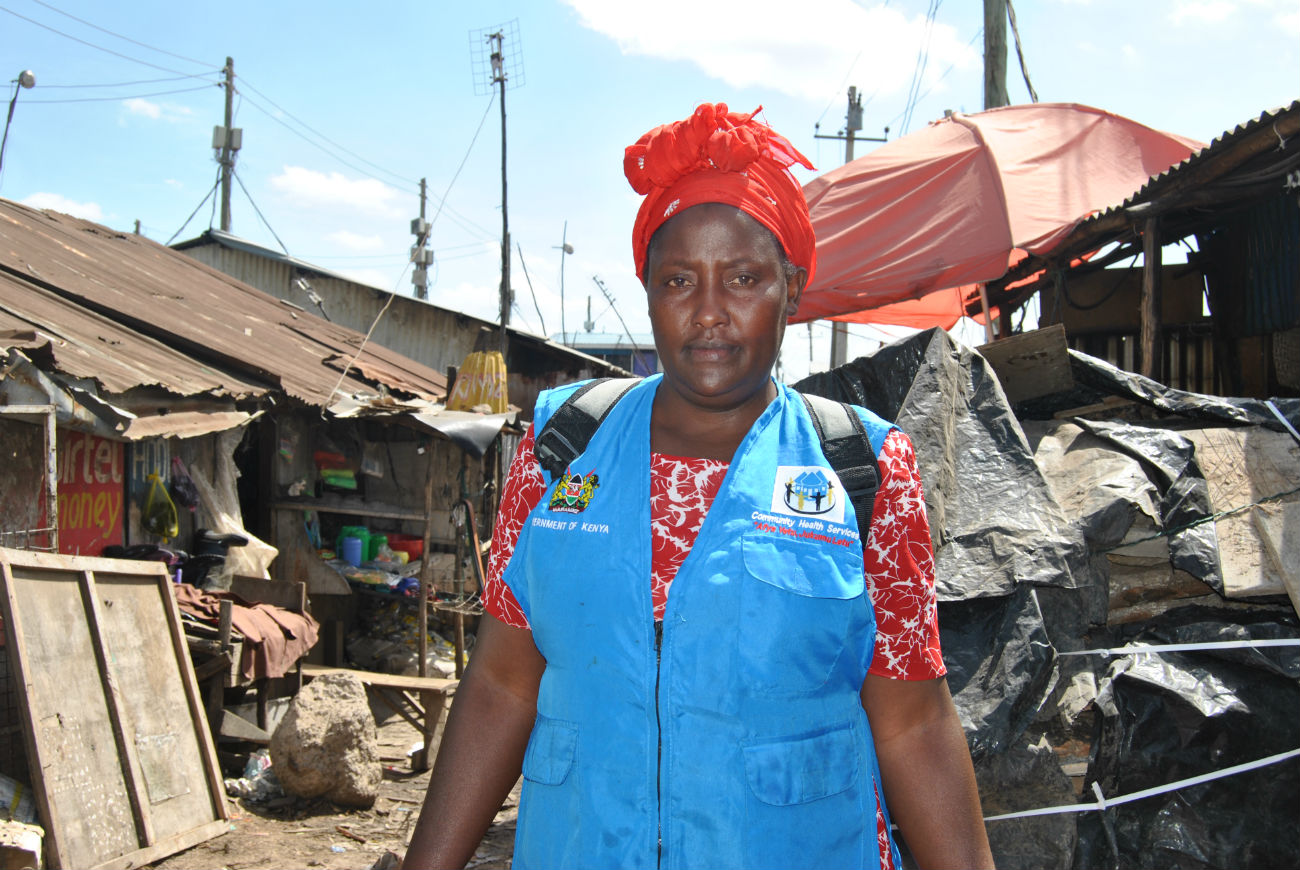 Mukonyo poses for a photo during her work in the slums.

All of which makes for more work ahead.

Kamau would very much like to see a shelter built for GBV survivors, a place that girls and women could go immediately after surviving an assault (as opposed to simply returning home to suffer alone and in environments that are often unsupportive). Beyond that—and the work that both Wangu Kanja Foundation and ActionAid Kenya are already doing—hope lies in changing Kenya’s male-dominated cultural mores.  As Kola explains, “Men should be involved in the fights against gender-based violence; they should stand up for the rights of women and girls. But real change will not come until we address Kenya’s deeply ingrained patriarchy. We must shift economic, legal, and government power to women and girls.”

TOP PHOTO: Mukonyo Kimeu explains some terms to a man in the Mukuru Kwa Reuben slums while giving out educational material

Dominic Kirui is a freelance journalist based in Nairobi, Kenya. He has been published at Thomson Reuters, News Deeply, Equal Times, WAF Magazine, Civic Ideas, AfricaWorld News and The Star Kenya.