The Perils of Saying ‘Me, too’ in Egypt 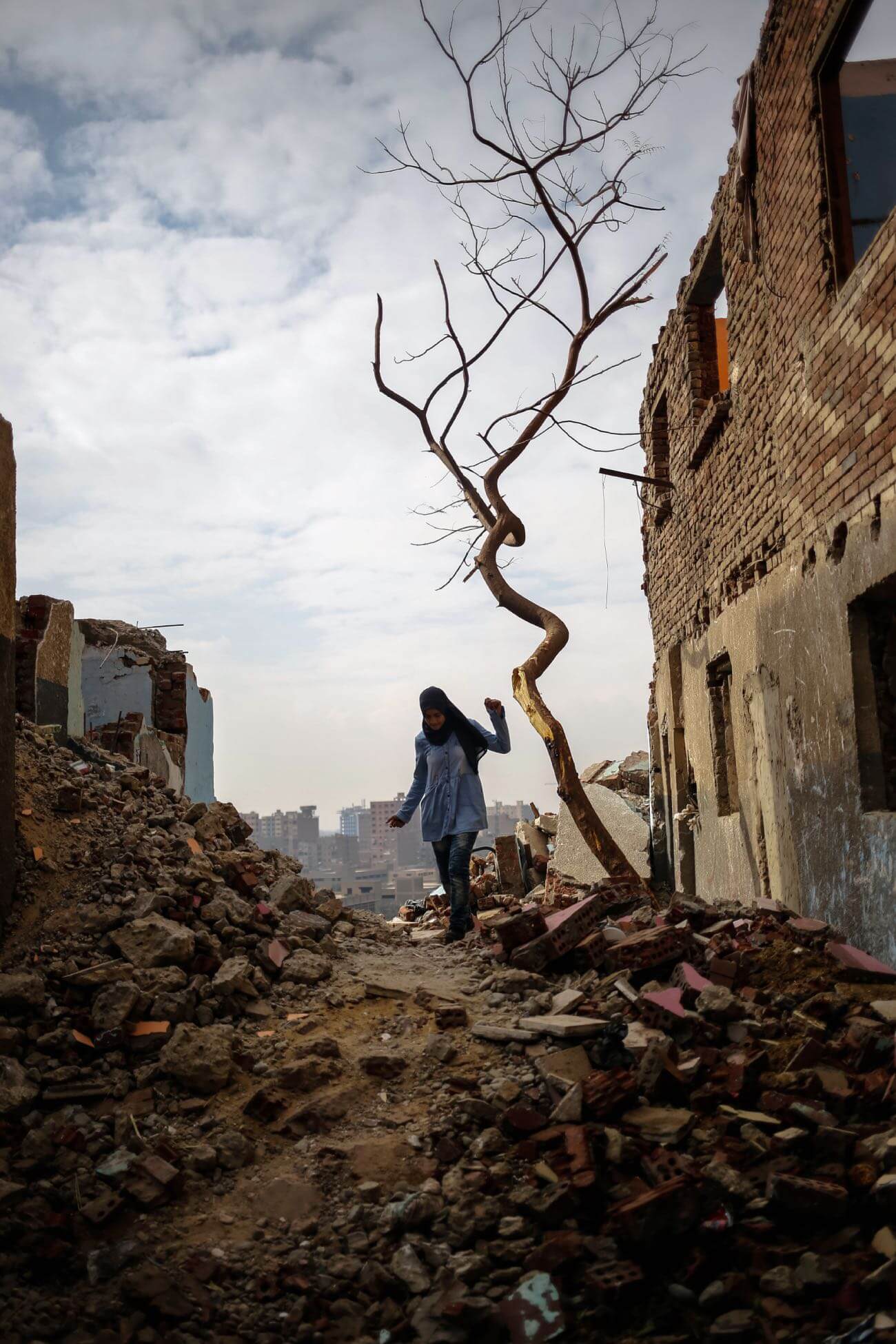 Yara picks her way through the rubble created by fallen-down buildings in Khairallah. All photos credit by: Plan International / Heba Khalifa

Fifteen-year-old Yara doesn’t go out on her own. In the slum where she lives in Cairo, girls and women face a daily battle with sexual harassment. If she leaves the house without her father or her brother, two years her junior, even just to go to school, it’s almost certain she’ll be cat-called by men. She may be groped—or worse.

It’s an experience familiar to thousands of girls and women across Egypt and one which should make the country a fertile ground for the #MeToo movement. In 2013 a UN study reported that 99% of Egyptian women had experienced at least one form of harassment at some point in their lives and 83% did not feel safe in the streets.

That same year, women took to the streets brandishing knives in a symbolic protest against sexual violence, and in 2014 Egypt’s former interim president Adly Mansour officially criminalized harassment with punishment of up to five years in prison and fines of up to 50,000 Egyptian pounds.

But like most in Ezbet Khairallah, a former wasteland that attracted swaths of rural migrants from upper Egypt in the 1970s, Yara has never heard of #MeToo.

Even if she had, she wouldn’t take part.

Where Yara lives, among an estimated 700,000 others in one of the most densely populated communities in Egypt, girls don’t tell anyone when men shout lewd comments at them in the street or when they’re touched by drivers of tuk tuks (motorized rickshaws) on their way to school. Even rapes are woefully underreported, according to Dr. Jacinthe Ibrahim, program manager at child rights organization Plan International.

Why? The girls who speak out pay a price. 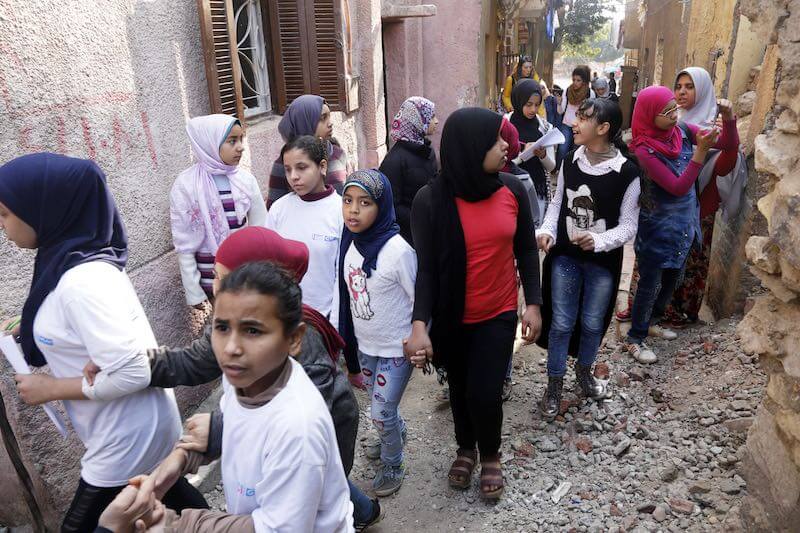 Plan International has seen hundreds of Egyptian girls withdrawn from school early every year because they have been harassed on their daily commutes. “The reason is the girls’ and families’ perceived honor,” Ibrahim explains. “If people know a girl has been harassed, fewer men will step forward to seek her hand in marriage.”

While school is compulsory up to the age of 14, almost a fifth of children drop out before completing basic education, and 15% drop out in secondary school. Harassment is a major factor. “The biggest reason we’ve been told that girls drop out of school is harassment by tuk tuk drivers,” says Azza Mohamed, manager of the Old Cairo division of Egypt’s Ministry of Social Solidarity. “Girls have also been kidnapped.” 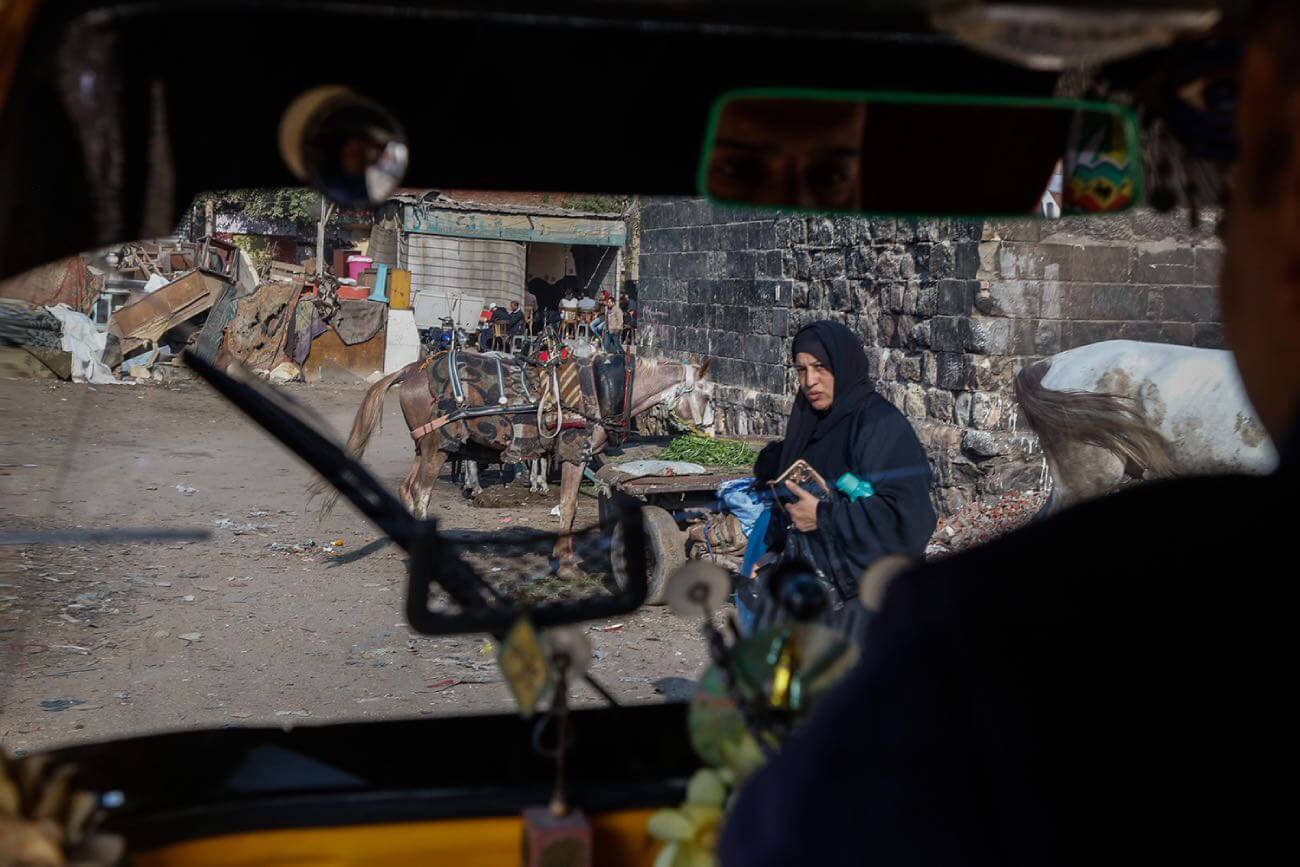 Yara has seen this phenomenon play out amongst her friends.

“My best friend was harassed by a boy while she was walking to school,” she says. “Her father saw her with the boy, decided it was her fault, and marched her home immediately. He called her names and beat her badly and told her, ‘You’ll never go to school again. You’ll never leave our house again.’”

That was three years ago. Yara has barely seen her since.

Fifteen-year-old Donia has also been deeply affected by these cultural mores.  She recounts, “When my father heard about my having been harassed recently, he said that if I were bothered by a boy again, he would pull me out of school. He told my mother he would divorce her.”

Another friend of Yara was recently groped in the street in front of her friends. “She felt so ashamed she didn’t go to school for a week. She knew our other friend who’d been pulled out of school for being harassed and was terrified the same thing would happen to her,” Yara continued.

The shame felt by victims also creates a vicious cycle. A poll by UN Women found that in 2013, only 6.6% of victims of harassment reported the incidents to the police. The victims attribute this behavior to shame. When crimes go underreported, the criminals don’t get caught and the local police and government don’t know the extent of the problem.

Girls and women in Egypt often feel guilty for having been harassed; indeed based on their clothing alone, they are treated as instigators of the abuse. More than three-quarters of men in Egypt who sexually harassed a woman or girl cited their “provocative” dress as a legitimate reason for their actions, according to a study by UN Women and the NGO Promundo. Many Egyptian girls grow up being told that a dressing modestly (which includes covering their heads) is their best protection.

“It’s definitely the case that girls are harassed because of the way they dress,” says Hany Sayed, a tuk tuk driver who works in Khairallah. “Girls in Cairo often walk down the street wearing tight clothes and makeup. That leaves men with no choice but to harass them. They can’t help it.”

Mr. Sayed, who is married but has no children, believes that girls and women who cover up don’t suffer harassment. He claims that that the young women in his life—his sisters and nieces—have never been harassed because they always wear long dresses and have their heads covered.

Aya, 13, is learning karate to defend herself.

And UN figures show that almost all harassment victims in Egypt report having dressed conservatively at the time of an incident. Nearly three-quarters wore no makeup.

“Blaming women for the way they dress is a poor excuse,” says Dr. Ibrahim. “We’ve seen time and again that girls are harassed whether or not they cover up from head to toe. Victim-blaming is just one of the negative attitudes that needs tackling if ever we’re to put an end to this problem.”

Dr. Hani Henry of the American University in Cairo has identified another factor: resentment on the part of Egyptian men toward women for occupying jobs outside the home. In his study, Sexual Harassment in the Streets of Egypt — a New Theoretical Approach, he found that several male harassers believed that the optimum job for any woman was to serve her family. They argued that when women stopped fulfilling this role—by entering the workforce and competing with men for jobs—they deserved to be harassed.

“We do not have enough work for us (men), and we are the ones who should have a priority in getting jobs,” one interviewee told him. “Women should stay home if they do not want to get harassed.”  Ironically, female labor force participation is very low in Egypt, hovering between 20% and 25%.

These beliefs are deeply entrenched in the community in Khairallah. They will need to be tackled before the girls here can even consider participating in a movement like #MeToo.

That’s where Safer Cities comes in. Safer Cities is a program run by child rights organization “Plan International” that’s designed to root out chronic street harassment. The program offers classes in self defense (Yara takes karate); role plays with girls whose parents want them to stop going to school; and arranges meetings in which girls and women can air their concerns about sexual harassment in the public sphere and discuss solutions directly with government and community leaders. Safer Cities came to Cairo in 2015; in just three years, 1,000 girls ages 13 to 18 have benefitted. 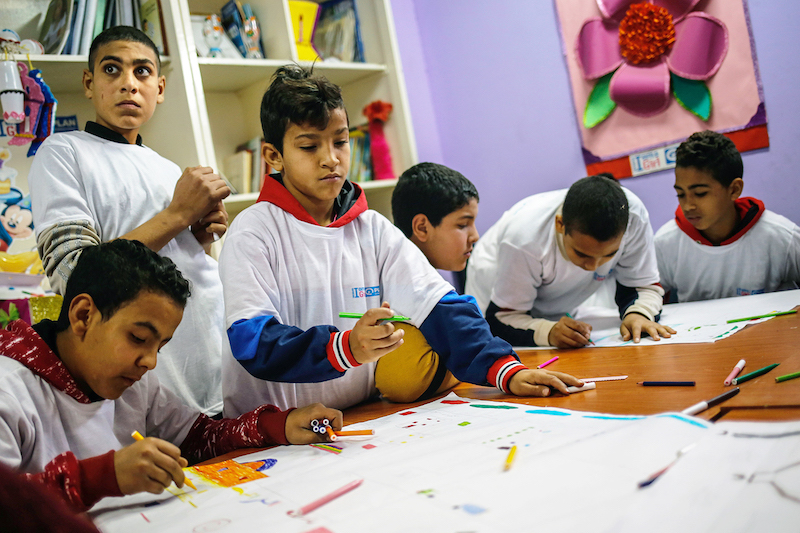 Boys take part in Safer Cities Project where they learn to treat girls and women with respect.

Safer Cities educates boys, too. Boys attend workshops where the popular notions that girls are to blame for being harassed and that men have more right to a job are routinely challenged. Roughly 400 Cairo boys have participated so far. The group also runs co-ed athletics programs. For the first time in their lives, boys are playing sports like football together with girls.

Safer Cities also counsels adults. It runs awareness sessions for parents that impress upon fathers as well as mothers the importance of girls’ education; and through art therapy, Safer Cities teaches tuk tuk drivers to treat girls with respect.

“We inform drivers about the safety issues faced by girls and how they can play a role in protecting them,” says Azza Mohamed, whose department helps run the training. “Art therapy is used to help them express their feelings and explore how to interact with girls more effectively.”

A group of trusted drivers has also been identified that can be relied upon to transport girls to school safely. Drivers are incentivized with permission to operate their vehicles in communities outside Khairallah if they maintain clean behavior records (a privilege not ordinarily enjoyed by them and one that lets them earn more money). Complaints from girls are falling.

“After participating in Safer Cities for Girls, I’ve become a different person,” says Nada. “It’s increased my self-esteem and self-confidence and also taught me how I can stand up for my rights. Now when I walk down the street, I’m no longer frightened because I know how to protect myself.” 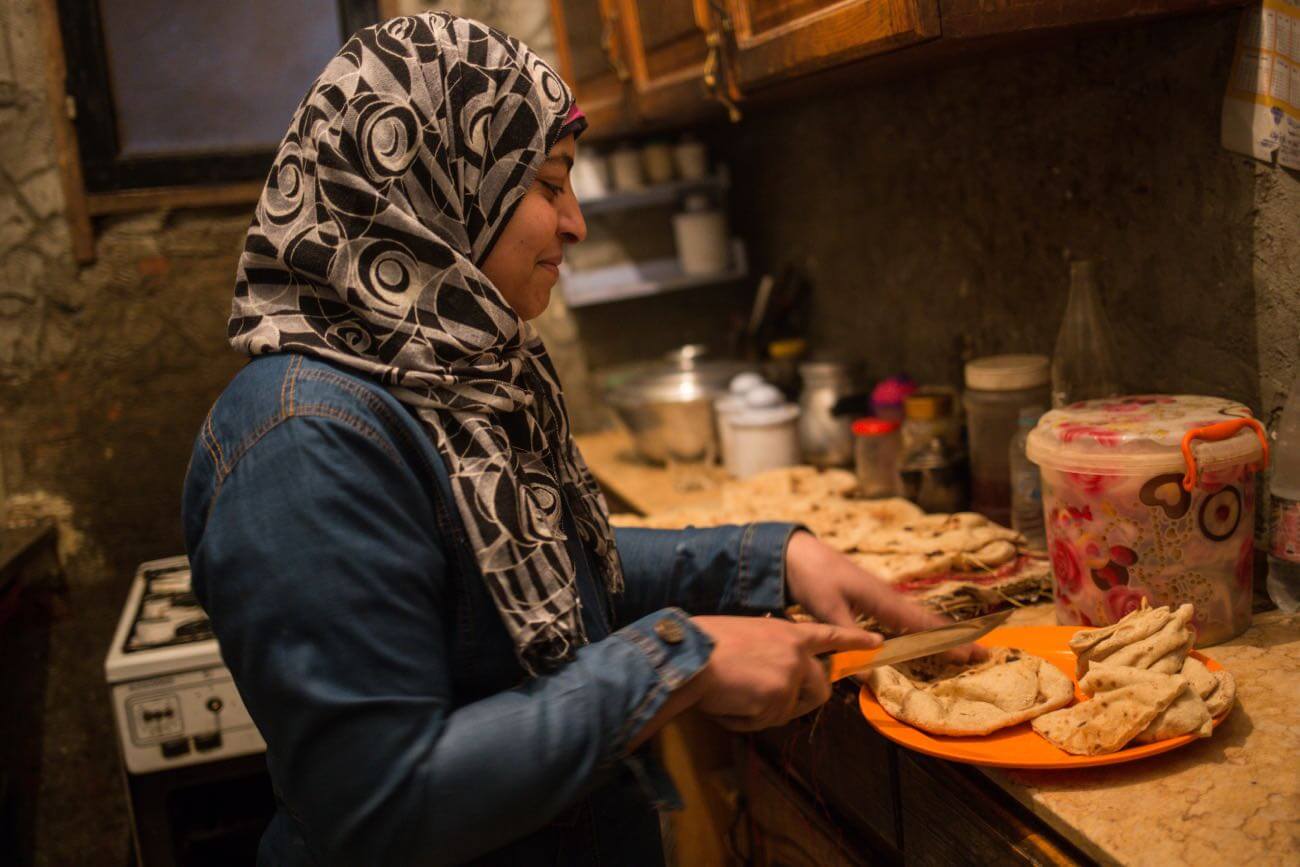 Yara’s mother Aisha prepares food for the family at home in Khairallah.

Yara has also grown in self-confidence. Her mother, Aisha, who attends parenting sessions run by the project, has noticed the difference. She’s no longer the irritable, nervous girl she was before,” Aisha says. “Since participating in the project, she has started to express her opinions and talk about her rights. She never talked about her rights before. Now I’m very confident that if Yara gets exposed to any dangers, she’ll be able to defend herself.”

Yara agrees and revels in her new-found influence.  “Safer Cities makes it possible for us girls to tell important people in our country about issues in Khairallah so that they recognize the needs of the people living here,” she says. “It seemed before like they didn’t know we existed.” Not every plea has been successful, but local authorities have taken action to install street lights in Khairallah, to clean up the towering piles of rubbish which attract flies in areas where children play, and to clamp down on harmful behavior by tuk tuk drivers.

In this way, Safer Cities is providing a platform to girls like Yara to make their voices heard—even if they’re not quite ready to say, “Me, too.” It’s also helping create an environment where one day maybe they won’t need to.