Meet Mandy Manning, the 2018 National Teacher of the Year

In this episode of Listen, Ladies, host Maryalice Aymong talks to Mandy Manning, the 2018 National Teacher of the Year. Since 2011, Manning has been teaching English as a second language in the “Newcomer’s Center” of Joel E. Ferris High Schoolin Spokane, Washington. Manning’s students are new arrivals to the United States, many even refugees. Right now she is taking a year to focus on her role as National Teacher of the Year, and this past May she visited the White House in that capacity. Manning used her time with President Trump to talk about her students and their contributions to our country.

Listen, Ladies (LL): What does it mean to be teacher of the year—both in terms of the responsibility and the opportunities it provides you as someone who is so committed to the teaching profession?

Mandy Manning (MM): It’s a big responsibility. Going into it I had no idea what it would mean, but I knew I would be invited to speak at different engagements and to speak to a variety of people—from policy decision makers to other educators to advocacy groups. But I didn’t know to what extent! It’s a lot larger job than I anticipated, but it’s also very welcome. I have been given this amazing platform to talk about my students—my immigrant and refugee students—and to talk about public school education in general. I also get to advocate for my colleagues to ensure that we are able to meet the needs of our individual students every single day that we are with them. 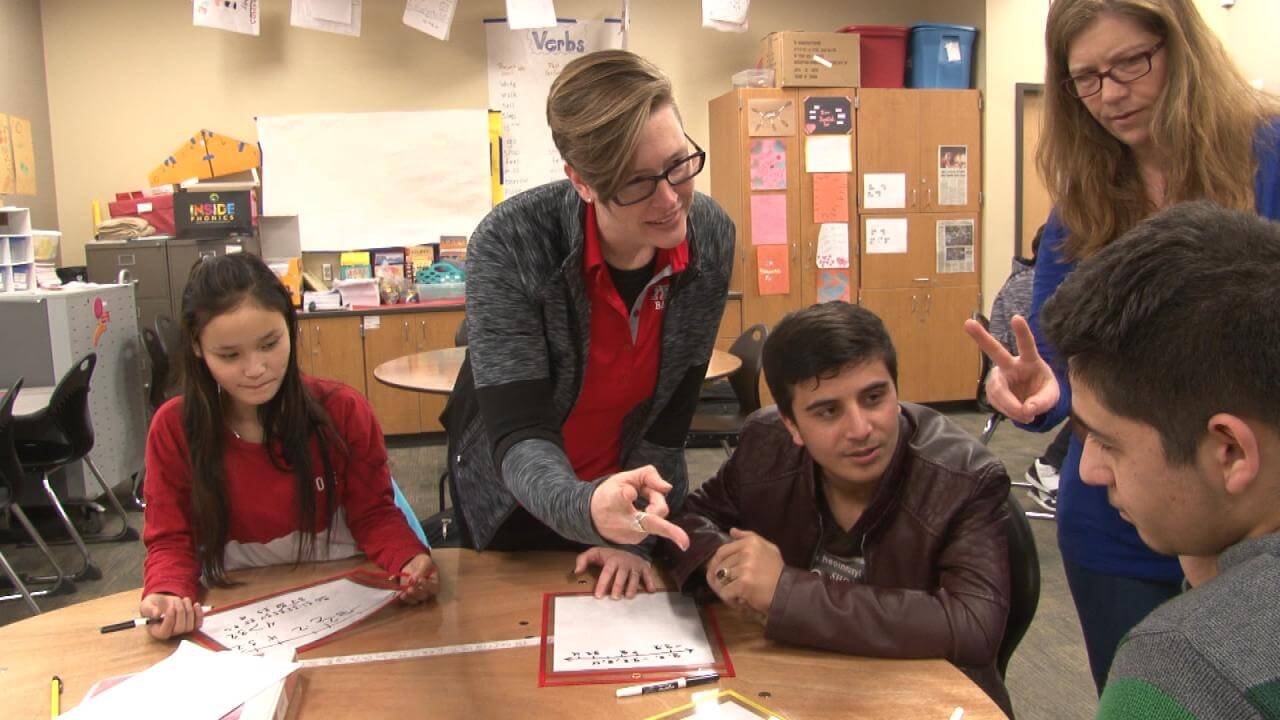 Mandy Manning with her students in Spokane.

LL: Many of your recent students are refugees and new immigrants. You could be the very first teacher they have upon entering the country. Can you tell us what led you to teach ESL and what you focus on to make your students feel safe and welcome as learners and as immigrants who, I imagine, are dealing with a lot of things in their personal lives?

MM: Before coming to Spokane, which is where I teach now and where I’ve been for ten years, my only experiences teaching the English language were in the Peace Corps and in Japan. But in both those casesI taught English as a foreign language, not a second language. Those are two very different things. If you’re teaching English as a foreign language, your students are likely to be tourists or business travelers; if you are teaching English as a second language, you are teaching people who need to function on daily basis in the United States. So the stakes are much higher. Earlier in my career I did teach in The Bronx for a year, and many of my students there were English language learners. But it was in a very different sense than what I do now.

When I came to Spokane, I was actually teaching video production. It was my first time going back and teaching what I had learned in college. I only had a half contract, so to fill out my time I took on some other positions, and in one of those other jobs (Collection of Evidence), I met Tori Rous. She had been working in the English language development program in our school district for a long time. When we met we found out we had a lot in common. We’d both been in the Peace Corps, and as we started to talk she told me there were positions starting to open in the English language development department. Much like everything else I’ve done in my teaching career, teaching ESL was not something I felt I qualified to do because my credential is in English language arts. But she encouraged me, so I applied, and the rest is history! That was ten years ago. And then over the years I taught more and more classes. I’ve been teaching ESL in the newcomer’s center full time for seven straight years now.It’s been truly a blessing.

LL: When you were named National Teacher of the Year you presented to President Trump letters from your students. I am wondering what lead to that in terms of what you had been hearing from your students and what you knew they’d been feeling.

MM: When I was thinking about going to the White House this year, I was torn about what I should do. My students had been very uncomfortable since this new administration took office mostly because they were experiencing a lot of hateful messaging from different people. They saw bigotry in the news, they saw it on social media, and sometimes they experienced it in our hallways at school. Since this current administration took office, the school environment has not been as welcoming as it was before, and they knew this from the very first day after the election. I had students coming into my classroom ashen faced asking me when they were going to have to leave the country. That was because of a lot of the rhetoric that Trump used when he was a candidate. They were very nervous, and it just increased over time. They are no longer scared that they will immediately have to leave, but they are concerned for their own personal safetyand the safety oftheir family members. In addition, some kids are afraid their family members will not be able to stay here, and some have family members who are still waiting to come, and that’s been delayed. I was very torn about accepting the White House’s invitation. I didn’t know what to do, so I asked my students what they wanted me to do. They said that they wanted me to go and to share their stories. I started to think about that, and I thought, “That’s all well and good, I can tell stories. But what better way to have my kids tell their stories than to have do it themselves?”  There have been other teachers of the year who have brought letters to the president from their immigrant, refugee students, but this seemed like a really good way for them to voice their own ideas and thoughts about being a student in the United States—about coming to the United States, about how they feel, and how thankful they are. And they could relay their dreams and hopes for the future and how dedicated they are to being productive members of our communities. What an opportunity this would be for the kids to tell the president that his language and actions are very important because they signal to other people how they should act and be—but that his words often scare them. So I had them write letters, which turned out to belovely and beautiful. I put them in a big envelope and delivered them to the president.