An indie film written and directed by first-time feature filmmaker Rachel Carey, “Ask For Jane” is based on the true story of a group of Chicago women who helped more than 11,000 others get safe abortions in the years just before Roe v. Wade. Birth control in the late ‘60s was hard to find. Abortion was illegal in Chicago and punishable by law, and women faced with unwanted pregnancies either had to take matters into their own hands or undergo a potentially risky procedure by doctors who may not have had their interests at heart.

Enter the “Janes,” a group of college students, wives, and mothers who stepped up to help themselves and others. The group was officially called the “Abortion Counseling Service of the Chicago Women’s Liberation Union,” but commonly it was called the “Jane Collective” or just “Jane” after the name adopted by all of the women in the group. 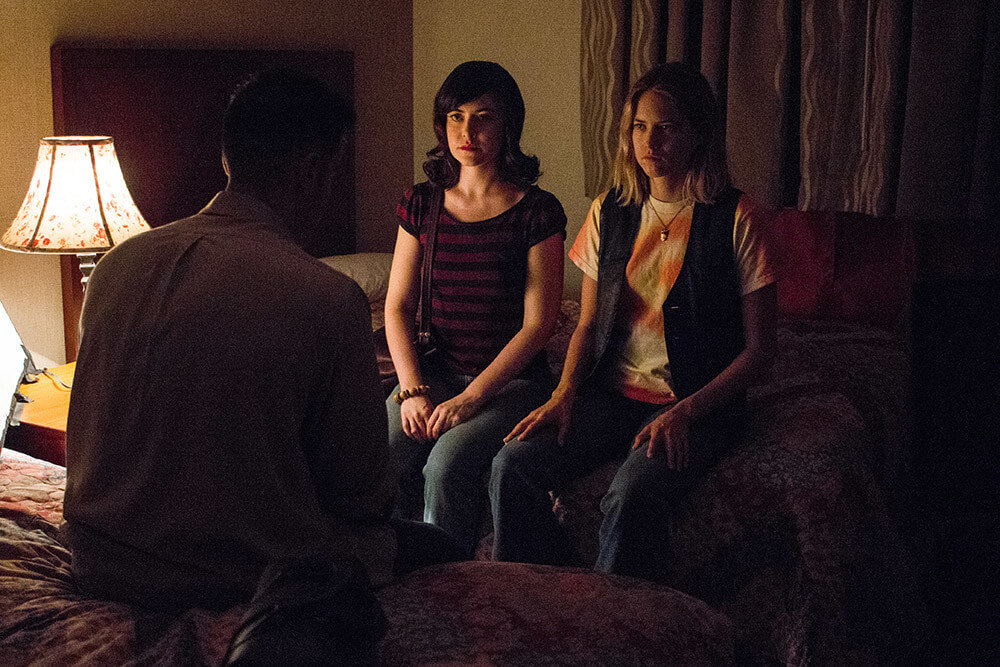 All photos: Courtesy of Cait Cortelyou

The feminist underground service operated from 1968 to 1973, which is when the Supreme Court legalized abortion across the country in the Roe v. Wade decision. As shown in the film, it started with informal networking—the passing around from woman to woman of a phone number for an abortion doctor. Word and requests grew as did the number of women involved in providing their pregnant counterparts with help. Propelled by an understanding of what desperate women might do if they didn’t step up, the Janes developed an organization (that was really an open secret in the Chicago area) that provided not only the phone number of a safe abortion doctor but counseling and empowerment for the women, who were encouraged to embrace the idea of self-determination. Eventually, the Janes received training and provided abortions themselves (with an impressive safety record).

“Ask for Jane” was completed this year and has been shown at several regional film festivals in the United States. It screened at the Hamptons International Film Festival in New York on October 7, 2018, the morning after the United States Senate voted to place Brett Kavanaugh on the Supreme Court.  The timing is fortunate:  Kavanaugh’s confirmation could result in rulings that reinstate abortion restrictions or a ban that will return women to the predicaments that inspired the work of the Janes.

The film is a fictionalized treatment of events though the story was developed in consultation with Judith Arcana, a writer and teacher who was an original “Jane” and has a cameo in the film. Ms. Carey, the writer-director, said she was interested in showing how the young women in the group—college-educated and primarily middle class, some of whom were married and others expecting to leave college with their “Mrs.” degrees—found themselves “in this position of being radical. In 1970, during a time when students were exploring new ways of looking at the world, Ms. Arcana was a young high school teacher outside Chicago who offered her students encouragement and a forum. The summer after being fired (“for obvious political reasons,” she said), she thought she might be pregnant and called the number for the Janes. Though she did not ultimately need the service, Arcana was invited to get involved with the group.

“Women should have babies when we want them and abortions when we need them,” she said. Focusing on seven women who were arrested after beginning to perform abortions themselves, Ms. Carey developed individual back stories for the characters that show the wide range of circumstances leading women to seek abortions, including rape, health issues, and having many children already.

The film project began when Cait Cortelyou, an actress and activist who stars in the movie, saw the documentary She’s Beautiful When She’s Angry about the start of the women’s liberation movement. A mention of the Janes intrigued Ms. Cortelyou so much that she immediately researched the group. “I wrote the treatment that night,” she said. She asked Ms. Carey to work on a screenplay, and the two eventually reached out to Josh Folan of NYEH Entertainment, who, along with Ms. Cortelyou and Caroline Hirsch of Caroline’s Entertainment, shares a producer credit on the movie. 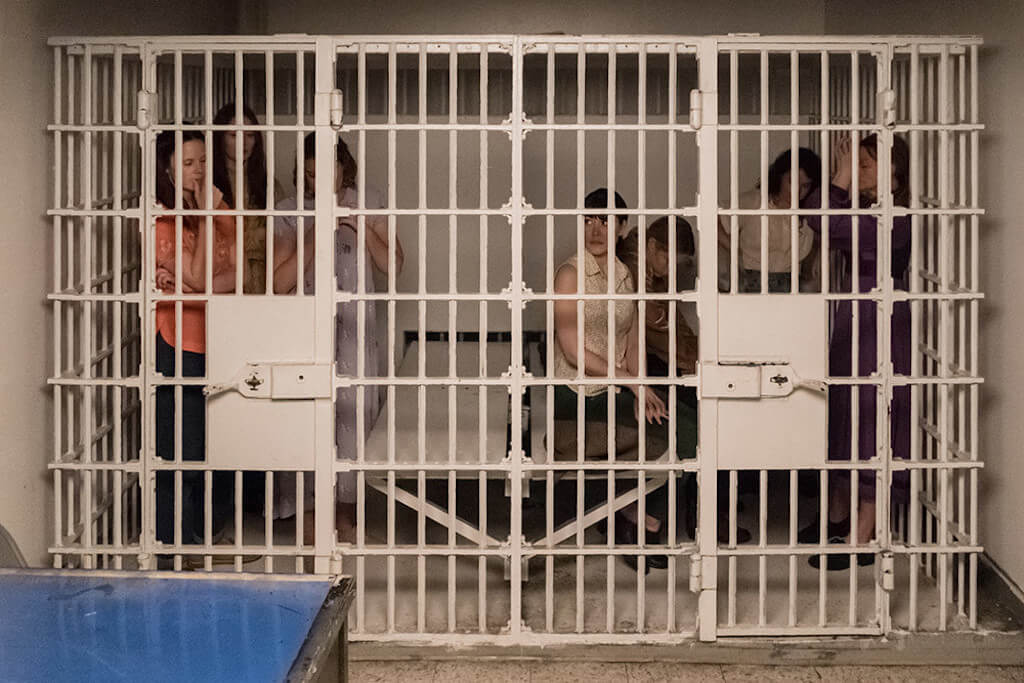 “All I could think was, ‘how was this not already a movie?,’” said Mr. Folan, whose previous work includes the 2017 SXSW audience award winner “The Light of the Moon.”(A documentary based on a memoir by one of the Janes has been done, and several other projects are in the works.) The film was supported by a number of women investors, including Ms. Hirsch, the women-run foundation Awesome Without Borders, and the industry group New York Women in Film and Television. Gloria Steinem has called the “true and irresistible story” a movie that “should be seen by every American.”

The largely unknown story of the Janes is “emblematic of the erasure of women’s history,” Ms. Cortelyou said. “Bringing it to light on screen was a “perfect conflation of my work as an actor and an activist.” A lobbyist for Planned Parenthood in Albany, New York, and an escort at a Manhattan abortion clinic, Ms. Cortelyou said, “I’d be really happy if this film helps destigmatize abortion. It’s a women’s health issue, not something that needs to be stigmatized. The more that there’s this aura of shame, the easier it is for the anti-choice movement.” One insight Ms. Arcana brought to the discussion of the film, Ms. Carey recently pointed out, was that “the way that we now frame the dialogue about abortion is influenced by the cultural right. The anti-abortion movement has been wildly successful in changing both the emotional and intellectual culture in this country around questions of motherhood in general and abortion choices.”

In the ‘90s, after a time when “all kinds of hideous and frightening things” such as attacks on clinics and murders of doctors who performed abortions were taking place, Ms. Arcana began writing and speaking about her experiences and about “abortion healthcare,” as she puts it. Ms. Arcana gained permission to do research at several abortion clinics and found the atmosphere “so different from the ‘Jane time’,” she said.

The women who the Janes helped were often frightened when facing what was then an illegal procedure.  But as the film depicts, and not unlike the Janes themselves, they often ended feeling empowered by taking charge of their own bodies and futures. At the clinics, Ms. Arcana was “stunned by the difference in the attitudes and emotional circumstances in the women who came through.” With mindsets “framed by the anti-abortion world … they were frightened because they believed that they were doing something terrible, but they had to do it,” Ms. Arcana said. “I realized it was shame; they were filled with shame. It saddened me, and I was angry. And I still am.” Speaking one day before the Senate voted to affirm Brett Kavanaugh to the Supreme Court, a candidate chosen in part for his expected support of overturning Roe v. Wade—and while women rallied in Washington, D.C., against Kavanaugh’s nomination—Ms. Carey said it was “very intense” to have the movie screening at festivals during this time.

Thirteen cases that could pose challenges to Roe v. Wade are “one step away from the Supreme Court,” Erica Sackin, the political communications director for Planned Parenthood, said in a recent television interview the same weekend “Ask For Jane” screened at the Hamptons film festival. Ms. Sackin predicted Roe v. Wade could be overturned or “completely gutted” within a year. “Roe is still on the books, but the fact that Roe has not been overturned is nearly irrelevant,” Ms. Arcana said, since thousands of girls and women in the United States who want abortions cannot get them because they live too far from a clinic or can’t afford the procedure—or both.

With a shift to the right in the Supreme Court, abortion advocates are predicting that access will become dramatically reduced. Anti-abortion laws that were nullified by the Roe decision are still on the books in some states; and other states have so-called “trigger laws” that would automatically ban abortion if Roe is overturned. The reversal or weakening of Roe could mean that abortion in more than 20 states will become illegal.

“We need to pay attention to how this country’s changed attitudes and laws endanger women and girls along with abortion providers.  We need to think about the safety and security of those who uphold abortion rights and work to provide abortion access—for now, when abortion is practically illegal and certainly inaccessible in much of the USA—and for when the right-wing-dominated Supreme Court overturns the 1973 Roe decision,” Ms. Arcana writes on her website, JudithArcana.com, which contains a page devoted to the Janes.

The story of the Jane Collective is “becoming shockingly relevant” and important to promote a “historical understanding of what women will do if necessary,” said Ms. Carey. The film not only illustrates the need for safe access to abortion, Ms. Cortelyou said, but that “if abortion is unavailable, women will find a way. It’s happening right now in the United States.”

“Literally for thousands of years, there have been women who could provide and did provide [abortions] in their own communities,” said Ms. Arcana, who was arrested in 1972 for doing just that. “Surely when Roe is overturned, that will be burgeoning in the U.S.”

*Joanne Pilgrim is a journalist and editor on the East End of Long Island, New York, who is currently working in municipal government.