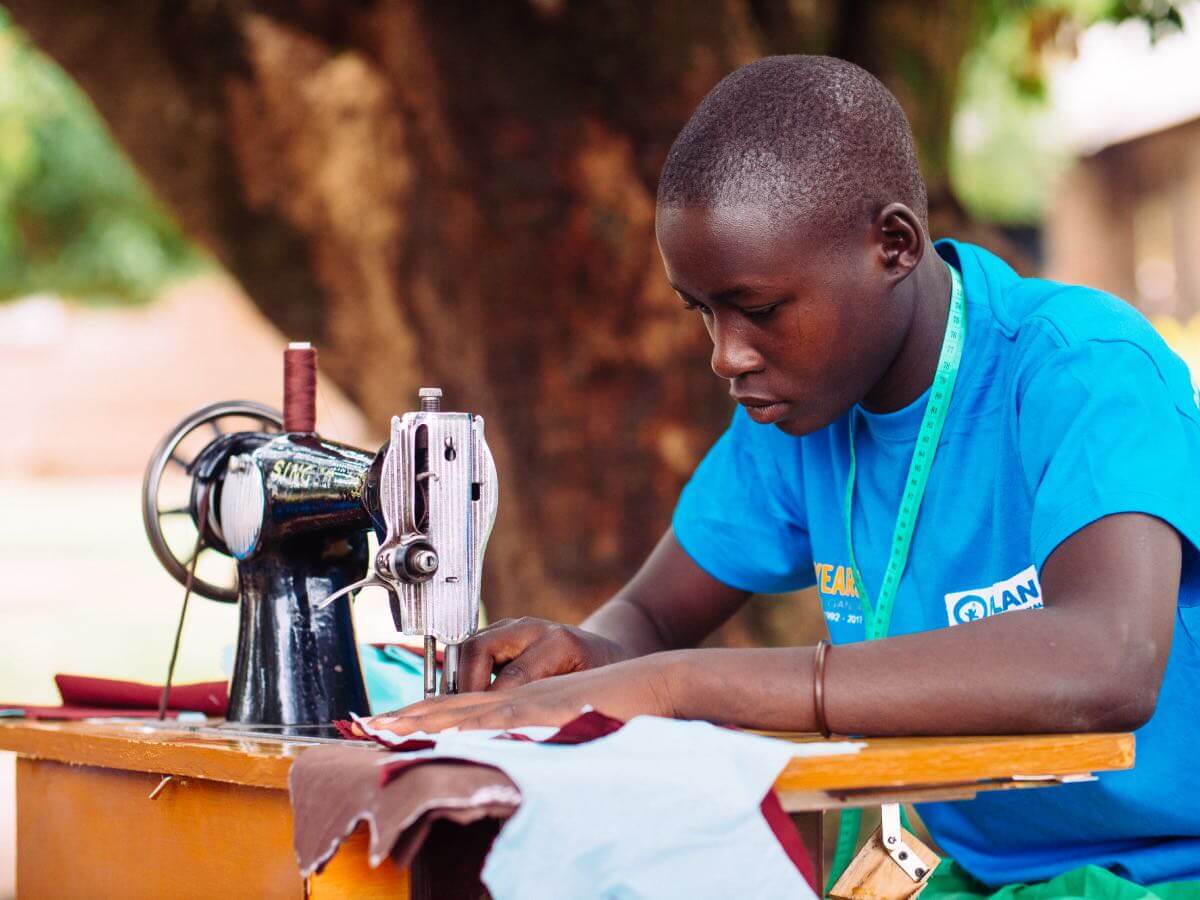 Tackling Uganda’s Period Poverty One Sanitary Pad At A Time

When Pauline, 18, got her first period at school three years ago, she had no idea what was happening to her.

She’d never heard about menstruation, so she was horrified to find her skirt soaked with blood in front of all her classmates.

“The boys started laughing at me, and I felt ashamed,” she recalls. In those days it was common for boys at the school in the rural town of Tororo, eastern Uganda, to draw pictures of slaughtered hens to mock the girls if they noticed blood on their skirts. “Madam, it’s like this one has been raped,” they would say to their teacher. 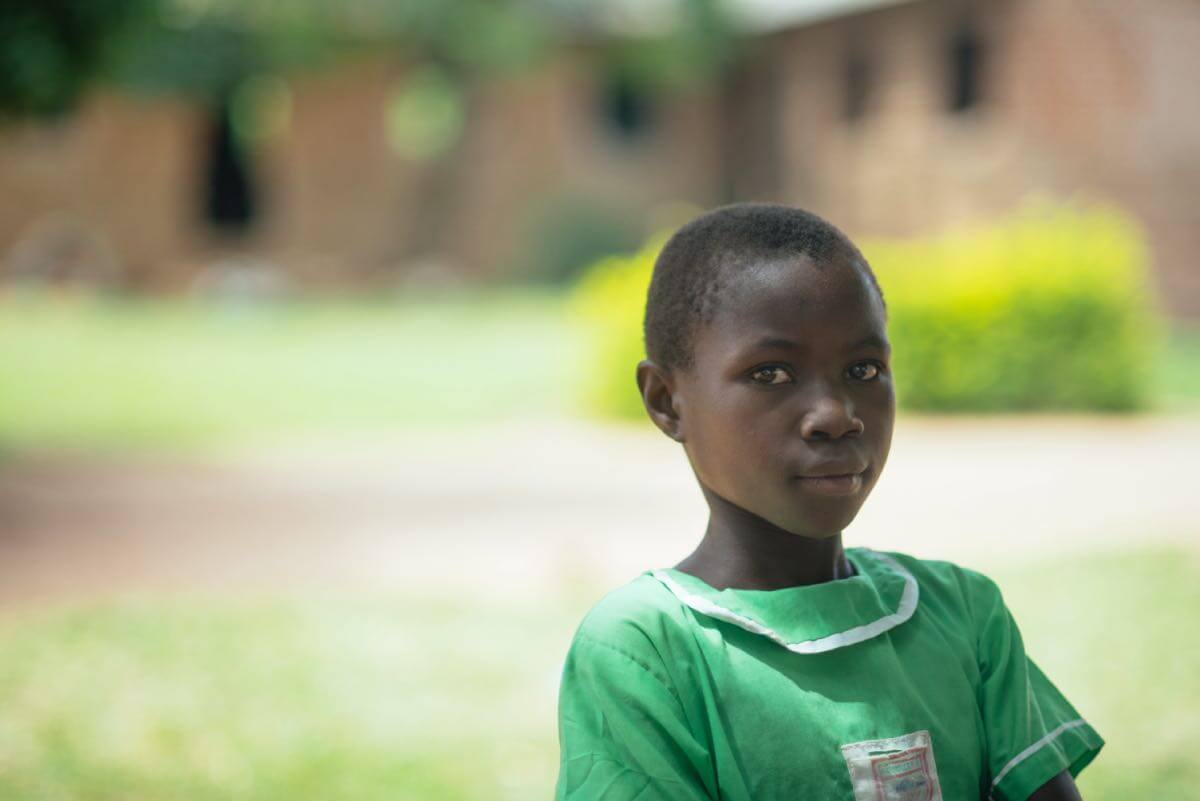 “I did not go back to school for two months due to fear of being embarrassed by boys,” says Pauline. She only agreed to go back when her mother agreed to transfer her to another school.

Pauline’s reaction might seem extreme, but she’s not alone.

Girls in Uganda often miss school when they are menstruating – the average is one to three days per month. Like Pauline, many feel ashamed due to the stigma attached to periods in Uganda – menstruating girls are often perceived as “unclean” and are even believed to have the power to stop crops from growing. In Uganda’s Karamoja region, girls spend their waking hours during their periods sitting outside on heaps of sand.

Others struggle to manage their periods at school due to the poor hygiene and lack of privacy. Many schools lack toilets with doors, and few provide clean water and soap; many more can’t afford to buy sanitary pads, so they either stay at home or are forced to rely on unhygienic, uncomfortable materials, such as stones or dry banana leaves, to protect their clothes. Almost two-thirds (61%) of Ugandan girls miss at least a day of school every year due to a combination of these factors.

For some, the inconvenience of menstruation causes them to drop out of school altogether, making them far more likely to end up in early marriages or become teenage mothers. Often marriage is seen as the best solution for coping with the expense of managing periods.

“According to government statistics, only 57% of girls complete primary education in Uganda,” says Rashid Javed, Country Director of Plan International Uganda. “While the reasons are many and varied, it’s clear that poor menstruation provision has a big part to play.”

Uganda’s government is all too aware of the problem. In 2015, its Ministry of Education introduced its “Menstrual Hygiene Management charter,” designed to halt the trend of girls dropping out of school at the onset of menstruation. Since then, it’s been working alongside Plan International and other NGOs to provide menstruation training for pupils and teachers and monitor the standard of menstrual hygiene facilities in schools. 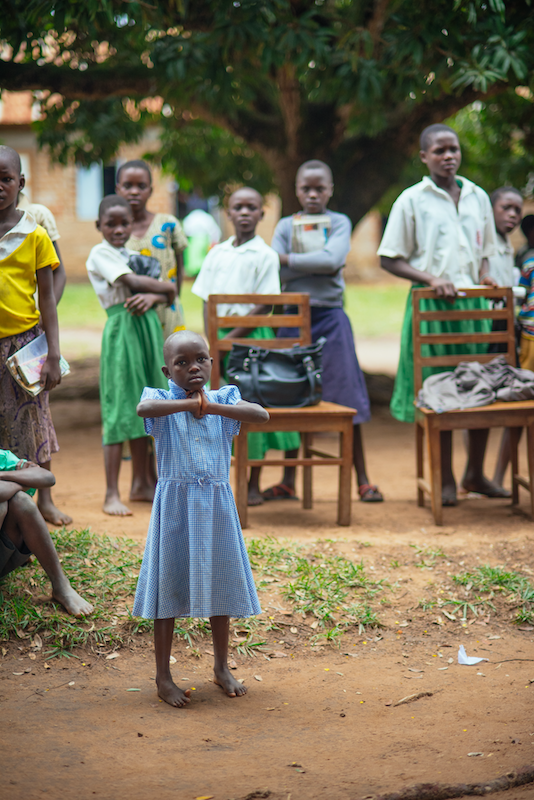 Schoolchildren observe the work of the MHM club at school in Uganda.

It also has plans to make sanitary pads free for schoolgirls via a public-private partnership that will see disposable sanitary pads manufactured in Uganda for the first time, rather than imported at great cost to the consumer. Despite a progressive move by the government in 2017 to remove tax on sanitary pad purchases, an average pack still costs around $2.

Sophie, 24, a participant in Plan International’s Champions for Change program in Kampala, is one of a group of young activists who have been instrumental in helping bring about these commitments.

“We have been talking to the local government about the link between menstrual hygiene and teenage pregnancy and the stigma around menstruation,” she says. “We’re calling on the government to budget for sanitary pads so that they are really free for every school girl.”

But with hundreds of adolescent girls at risk of dropping out of school due other factors, such as the lack of privacy and bullying from classmates when they get their periods, it’s crucial that efforts to support girls to stay in school do more than just supply sanitary pads. Indeed, a study by Plan International and Oxford University found that the use of sanitary pads alone may not be enough to improve girls’ menstrual hygiene.

That’s why Plan International has been working with schools in Tororo and across the country to run “menstrual hygiene management clubs” where young people – between the ages of 11 and 18 – learn about periods. In the clubs, the boys as well as the girls make reusable sanitary pads out of cotton and plastic, which the girls can take home. Any surplus pads are sold to pay for repairs to school buildings. In making the pads, the young people share a responsibility that would otherwise be born by the girls alone.

The clubs also use song – Pauline’s new school has a “menstrual hygiene anthem” – and roleplaying about periods to combat negative social norms, such as the idea that periods are something to be ashamed of. And rather than being forced to stay at home when they’re menstruating, girls now benefit from toilets with doors (constructed by Plan International) and equipped with buckets of water and soap for bathing. A total of 191 schools have benefitted.

Madam Audrey, a teacher at Pauline’s school who has received training from Plan International to help the girls manage their periods, has seen a dramatic change at the school since the program started. 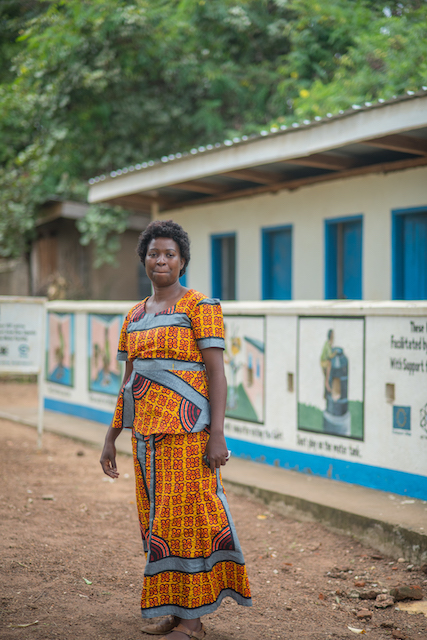 Madam Audrey, a teacher at Pauline’s school who has received training from Plan International to help the girls manage their periods.

George, the school’s headmaster, agrees: “Before, boys used to laugh at girls and tease them, especially when they soiled their clothes, but now they support girls instead of teasing them.”

More still needs to be done. Young campaigners supported by Plan International are working hard to ensure the government makes good on commitments such as providing free sanitary pads to schoolgirls and providing sexual health education to young people in Uganda. The latter is vital in helping girls prepare both practically and emotionally for their first periods and beyond, and debunking dangerous but pervasive myths such as the idea that sexual intercourse is the best remedy for curing the discomfort of menstrual cramps.

The government recently announced that a new mentoring program will be set up to train health workers on how to effectively provide sexual health services to young people in Uganda, thanks to a petition with 39,000 signatures delivered to parliament by Sophie and friends.

“Uganda can serve as an example to other African countries who are yet to put menstrual hygiene on the agenda,” she says.