Séverine Autesserre: Why The Way We Make Peace Needs To Change

By Safiya Songhai and Kate Roff

This article was previously featured in Peace News

In places like South Sudan, Syria and Congo failed peace pacts have devastating consequences. Now, renowned author Séverine Autesserre is writing a new book that focuses on a different approach to peace than traditional high-level negotiations: ‘peace from below’. And where it’s working.

“Peace from below is peace built by ordinary people, people like you and me,” Dr Autesserre, a professor of Political Science at Barnard College, Columbia University, said. “It’s peace that’s built by teachers who go and decide to meet with former students who have become militia leaders, it’s peace built by uncles, mothers, fathers, cousins, who go and meet with family members who are fighting. It’s peace built by local leaders as well, by traditional chiefs or local mayors or local elite who decide to do whatever they can to mediate conflict within their communities.”

Just one peace summit, arranged at a national or international level can cost millions, so why aren’t the big negotiations working? “There is absolutely nothing wrong with peace by political leaders,” said Dr Autesserre. “Except that very often it doesn’t happen, it just doesn’t work.” “What happens is political leaders sign agreements, sometimes they hold elections, and very often the media headlines praise peace, and then a week or two later – sometimes just days after – violence flares up again. Often it never actually ended, and in many cases it lasts for years after.” 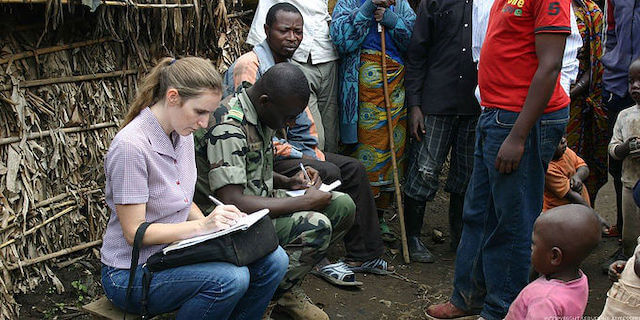 “The problem is that currently we are always focusing our efforts on the top, on political leaders, on elite, and we very rarely support peace at the grassroots.” But Dr Autesserre explained that lasting peace requires both these top-down and ground-up approaches.

In the Democratic Republic of the Congo the residents on the island of Idjwi have used a ‘peace from below’ approach to avoid violence, despite surrounding conflict claiming millions of lives.

“Idjwi has all of the conditions that have led to violence in surrounding provinces in other parts of Congo,” said Dr Autesserre. “So you have ethnic tension, you have land conflict, you have geo-strategic location, mineral resources, I could go on and on. But the inhabitants of Idjwi have managed to build peace, and maintain peace, by building on ordinary people and local leaders.”

“What they’ve done is promoted what they call a ‘culture of peace’ – they are very, very proud of their identity as a peaceful island.”

The island’s schools, churches and local organizations strengthen peace here, and respect for local customs also helps. For example, the community sometimes build on blood pacts, a kind of traditional promise between two families who to refrain from violence against each other.

A lack of research means grassroots peacebuilding needs more attention in the academic sphere, but there’s one common theme Dr Autesserre has observed in the various locations she’s studied.