It is time to talk honestly about sexism in urban planning.

Women live, transit, walk and use the infrastructure of a city in ways very different from men. In Mexico, women make up fifty-one per centof the country’s population,yet this majority is not reflected in the country’s decision-making structures. Deeply patriarchal gender roles sustained by a religion told women that their sole mission in life was to get married and to have children, while men should be the economic providers of the family.

Not surprisingly then, if women studied or worked outside the home, they did not choose careers in engineering, architecture or urban development, since these professions were considered “non-feminine”. This lack of women’s perspective influenced the current design of cities, leaving women, their everyday needs and realities, behind.

Is Monterrey an inclusive city?

Monterrey is located in the northeast of Mexico, and, with a population of almost five million (including the Metropolitan area), serves as the capital of the state of Nuevo León. Monterrey is also one of the country’s wealthiest cities and was voted Mexico’s “best city to live” in Mercer´s 2018 20th Quality of Living Ranking. Yet despite these accomplishments, the city hides many problems for the “regiomontanas”, as the city’s women residents are called.

Public transportation is one of the biggest urban problems in Monterrey. The brunt of the problem is borne mainly by the elderly, people living with a disability, pregnant women or women carrying babies in a stroller as they have to use old and dirty buses whose high door steps are virtually impossible to climb by anyone who has the slightest mobility impairment. In addition, men regularly take advantage of the city’s hyper-crowded buses and subways to grope and molest women and girls — and almost always get away with it. 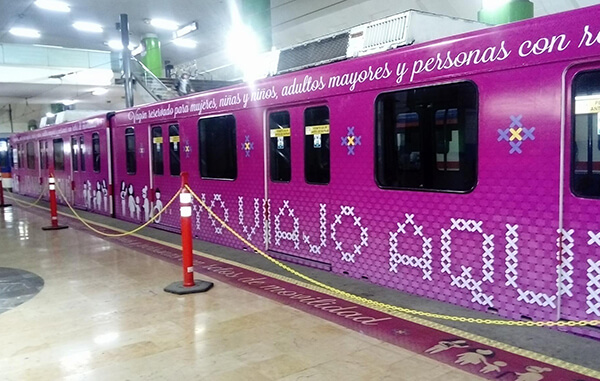 The amount of sexual harassment women were subjected to became so outrageous that women’s groups demanded that the city provide separate “women only” subway cars which finally were put in service in March 2018. However, these wagons only operate during peak hours and are not monitored enough, causing men to use them too.

Over the last decade, a significant increase in crime has caused many city residents, especially women, to change their behavior and movement patterns around the city, particularly at night. Women report that they do not go out as often anymore or try not to go out late because they are afraid of being assaulted. Moreover, many girls are being told to fear the world outside their home, falsely internalizing that public spaces are the world of men.

Streets, sidewalks, and public spaces in Monterrey are generally difficult to navigate for people who are mobility-impaired or living with a disability. Ramps into stores or subway elevators are scarce,and sidewalks, if they exist at all, are not dipped. Streets and parks are generally poorly lit, which increases the danger and stress for women when they have to navigate these spaces as they go to and return from work.

Moreover, the city of Monterrey does not have a network of clean public toilets. Available public toilets often do not have water for flushing, the floors are dirty, and baby changing areas are on top of storage boxes. In addition, sanitary pads for women are not provided, which affects predominantly poor women.

In terms of housing opportunities for single women, the gender pay gap has significant consequences. Women already earn around thirty per cent less than men and, because they lack the security of a second spousal income, have less access to housing credits as a result of their marital status. According to a recent studycarried out by Dr. Socorro Arzaluz, researcher at Colegio de la Frontera, if women decide not to marry or have children, they become “individuals with less access to credit and financing to obtain a home of their own from government institutions”.

The inclusion of women´s perspectives in city planning is crucial to create an inclusive city. “Women’s voices are truly scarce in Monterrey. Very few women speak; they remain silent due to a culturally established subordination in our society with the traditional roles of obedience to the male model,” says Dr. Maria Elena Chapa, Professor of Philosophy at Universidad Autónoma de Nuevo León, and former Director of the Women’s Institute of Nuevo Leon.

“Monterrey was built in a very linear way without considering women´s daily occupations such as taking our kid to the daycare, buying groceries with the mother, then going to the pharmacy, then taking the clothes to the laundry, etc. It is not like men, they go to work, the bar and finally to the house. That’s the way men move, and women move in zigzag going to different little things,” Dr. Chapa says.

Building public programs towards an inclusive future for women

After years of lobbying by women’s rights advocates and their allies,change is coming. Monterrey is in the process of implementing two programs, the Gender Equality Program of the Secretariat of Sustainable Development and the State Program for Urban Development 2030, which stipulate that women will have more formal say in the design and planning of their city.

Both programs encourage women’s participation in identifying high-risk city areas and transforming them into safe public spaces, free of violence. In addition, both programs promote mechanisms that facilitate women’s access to housing, as well as to obtaining title deeds.

As part of these programs, the government has pledged increased investment in women’s group projects. It is hoped that this will encourage the participation of female civil society organizations in the social action initiatives promoted by the government for the benefit of women and girls. Additionally, the programs will promote the creation of dialogue groups in which different social groups will be able to participate directly in the decision-making about the most important issues facing their city.

As societies around the world become more urbanized, the full inclusion of women, youth, LGBT people, people living with a disability, and similarly marginalized groups in city planning is a prerequisite for safe, stable, and sustainable urban development and economic growth. (Re-)Designing a city to reflect the lived realities of all city residents and not only those of the privileged few is not only a moral imperative but also smart politics.

*Ana Cristina Garcia is a Project Officer for the Local Pathways Fellowship at the UN Sustainable Development Solutions Network – Youth Initiative. Ana has a MS in Global Affairs from New York University.