Listen, Ladies (LL): Why do you do what you do? How did you get into this work and why do you stay?

Maggie Gray (MG): So, I got into this because I really did and do love sports. If you don’t love it, this would be an insufferable job and you would hate every second of your life. So, I really do love sports. It was a hobby of mine growing up. My mom always said that people say life is short, but life is actually very long, so if you don’t like what you’re doing, you’re going to be miserable. And I loved sports. When I was in high school, I was keeping stats for the minor league hockey team in Binghamton, New York, and from there I went to the college radio station. There was just something about it—I always felt like I was in my element. I am the kind of person who really works off of fear, and something about when the red light goes on—there’s this sort of anxiety that I actually love. It’s weird. There’s the performance aspect, and it is now or never—it’s go time. I think I was born with a sense of urgency coming out of the womb, so it really gives me that fix every day. I know I’m going to be broadcasting, and I am going to be doing something. I got started at it at a very young age, in college and high school, and I just kept getting more jobs and kept working and had it going through the natural progressions of the industry. A couple of twists and turns, a couple of zigs and zags, and then I found myself here at WFAN. 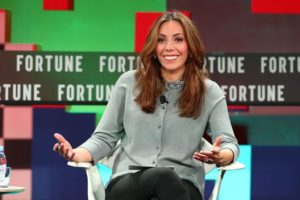 LL: When you started this job and began to work on this show—in the press releases, it said Gray would be the first woman on WFAN’s daytime schedule since 2001. You host the show with Bart Scott, a former (New York) Jets linebacker, and Chris Carlin, who spent several years at WFAN. Do you think about your voice as the one woman voice on the show? And on the day time schedule? Or do you not really need to think about that?

MG: I think it is kinda hard not think about it just because I know that I am going to have a different point of view, or potentially, I am going to have a different point of view that anyone else on the station. It is a little overwhelming sometimes when I try to think, ‘I don’t want to be speaking for every woman within earshot.’ I do take it as a big responsibility for sure, not just for myself, but to try to bring that perspective that maybe people hadn’t thought about because 99 percent of our audience is male. It is trying to bring them a different perspective that maybe they hadn’t thought about. I am basically the one. There is also Laurie Rubinstein, who does a little. She does some overnights, and Kid Jones does fill-ins, and Susan Waldman does the Yankees. I feel like there is a lot of responsibility, like if I don’t do a great job, or if I were to get exposed somehow, or like I couldn’t handle the job, that’s going to hurt the next woman who comes along. That shouldn’t be the case. I can’t help but think that if I went on the air and messed up, it could be a complete disaster and is that going to hurt the next woman who walks through the door and wants to show them that I can do this job, which has normally and always been all- male? That is a lot of it. That is a lot of what I am thinking about, not to overwhelm myself with it, but to keep that in mind. I am doing it for myself, but I am hoping that one day when I am gone from here, whenever that is, that they may want to fill my seat with another woman. And I would feel great about that, if I could help a little in that regard.

LL: What do you think about the fact that athletes do have such a big platform?

MG: It is such big business. When speaking out or not speaking out, guys often feel like they are making a business decision. They have to feel like if I do step outside what the normal confessions are for athletes, how am I going to be prepared to handle or deal with it? Some guys say,  ‘Bring it on. This is something I feel deep in my heart and soul, and I am willing to take a stand upward.’ Other guys will say, ‘Not for me. I would rather just play it down the middle and be as vanilla as I can possibly be because I do not want to share myself with the public in that way.’ I think it is kind of both. As for the athletes and how much they’re paid, it is abstract money. If the market and economy say that person is worth that amount, then I think they are worth it. 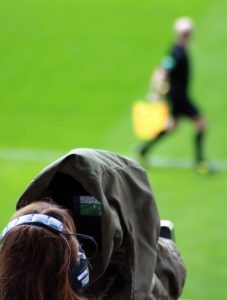 LL: Serena Williams, there is a lot to be said. A lot of commentary has come out about her since the U.S. open. Is it fair commentary? Is the criticism against her fair? Do people need to chill out?

MG: She’s a public figure, who had a very public melt down, so the criticism is definitely fair. You are in this public space. You do this big thing and have this moment. The critics are going to come no matter what. She knows that more than anybody. So fair, unfair, it is just part of it. People are going to be critical. There was a lot there. I think women saw that exchange with the umpire very different than men did, or most men. I think women saw that differently because it did seem like there was a bit of a power struggle between her and the chair umpire. The frustration kept building and building and building. What is the job of the umpire? In my opinion it is to de-escalate a situation that could be brewing or feels like emotions are getting way too high. Instead, I felt like the umpire did not do that. We do this for men from athlete to athlete. Tom Brady is on the sidelines screaming at his teammates, and we say that he is “fiery,” he has passion. Odell Beckham Jr. does it, and he is a distraction, he is immature, he is a head case. I think that we pick and choose from athlete to athlete whether we think their responses are appropriate or not, whether we feel like they are good winners or good losers, or whether they are classy, or whether they take the high road, or whether they are just caught up in the moment. We judge each athlete case by case. Sometimes I feel like it is unfair; sometimes I feel like it is totally warranted. But I feel like that is what happened with Serena. She’s had issues with line judges before, and judges weren’t able to just judge it on what it was at the time. I think that is part of this being in the public eye like that. Everyone is going to have an opinion, and I guarantee that she could have cared less about all of that. I really do. Your emotions are on 100, and it just took away from her opponent, who was also so overwhelmed with emotion. That was such a powder keg of crazy. But I do think some of the criticism she got was unfair. I thought it was coded like, ‘women are hysterical,’ which I don’t like because a lot of times men don’t get labeled as being that. They get labeled as being passionate or having a lot of heart. I think it is really hard for people to change their perspective about them. Especially when it gets in your brain that you think so-and-so is this way, then it is really hard to change people’s minds. There are just certain athletes that, no matter what they do, (critics) will always bring up something negative they did in college or try to connect these dots. Imagine if people were doing that to regular people. With athletes, we try to build a narrative, and once it is built, it is very hard to change. I think LeBron James has changed it the most. After he left Cleveland and went to Miami the first time people were burning his jersey and calling him a traitor. He had a narrative that he was a villain and how dare he leave Cleveland to go to Miami. He goes to Miami, wins a couple titles there, goes back to Cleveland and wins a title there. He changed from being the villain back to the hero in this big way. He has done a lot to change his narrative, but for other people, I think it is really hard.