We live in an era where it’s easy to feel overwhelmed by the mass of information that swirls around us. It can be hard to sift through the “fake news” and “alternative facts” that confuse and mask the truth that should move us all to take urgent action. Yet occasionally, a burst of powerful data does break through that can’t be ignored. Today, that is the 2019 Sustainable Development Goals (SDG) Gender Index launched by Equal Measures 2030[1].

The Index shows the true state of global gender equality. It looks at the lived realities of 95 per cent of the girls and women on the planet across 129 countries. Their access to quality health and education, their control over their own bodies and futures, and their ability to influence political decisions.

The verdict is in. With just over a decade until the SDGs are due to be delivered, not one country on the planet has achieved full equality for girls, women, men and boys. Even more troubling, almost 1.4 billion girls and women live in countries that get “very poor” scores in the Index. With findings like these, we are forced to conclude that world leaders will likely not deliver on the gender equality ambition of Agenda 2030.

It’s time, to try something different. Looking deeply at the data in the Index, one issue stands out – girl’s and women’s leadership. Even for the top twenty countries this is a “trouble spot”, let alone for those towards the bottom of the rankings. The countries who score best on the Index still have only one in three female members of parliament, government ministers and high court judges. Girls and women are simply not rising to positions of power and this is holding the whole world back. When one half of humanity is excluded from the big decisions in society, economies grow slower[2], governments are more corrupt[3], and citizens have a lower quality of life.

The change the world needs starts with unlocking the power of girls. We know they are ready to step up because Plan International and the Geena Davis Institute on Gender in Media spoke to 10,000 girls across 19 countries, and three quarters said they aspire to be leaders in their country, community or career. The report, Taking the Lead: Girls and Young Women on Changing the Face of Leadership, shows girls are also redefining leadership on their own terms, not just following male dominated models from the past. “A … leader treats everyone equally … She should have experience; she should not discriminate. She wants to make her society better.” This is the inspiring feminist vision of leadership of a girl from India we interviewed. 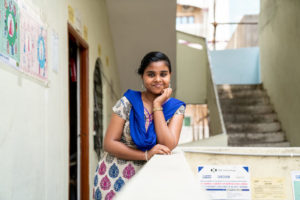 Twenty-year-old Lavanya is a leader on a mission in Hyderabad city. She wants to recruit as many girls as possible to gain vocational skills and find a job. Credit: Plan International

It’s true there are big barriers that still stand in a girl’s way, a problem that girls themselves are only too aware of. Shockingly 9 out of 10 girls believe as women leaders they will suffer widespread discrimination and sexual harassment. Yet things can turn around for the next generation of girls.

Girls are already changing the world. The recent Climate Strikes rolled across 128 countries and one extraordinary day of action saw 1.4 million young people take part. Greta Thunberg, the Swedish girl who inspired them, is now in line for a Nobel Prize. Girls just need more partners to step up and stand with them.To invest in the fundamental building blocks for girls’ empowerment such as those outlined in our Girls Plan– a holistic girl-led investment strategy with costed, tested and scalable program solutions. This is the way to turn the vision of girl’s leadership into a global reality. One where girls take over and succeed where world leaders have so far failed on the Sustainable Development Goals.

[1]Plan International is a core partner of Equal Measures 2030 with several other organisations: https://www.equalmeasures2030.org/who-we-are/core-partners/