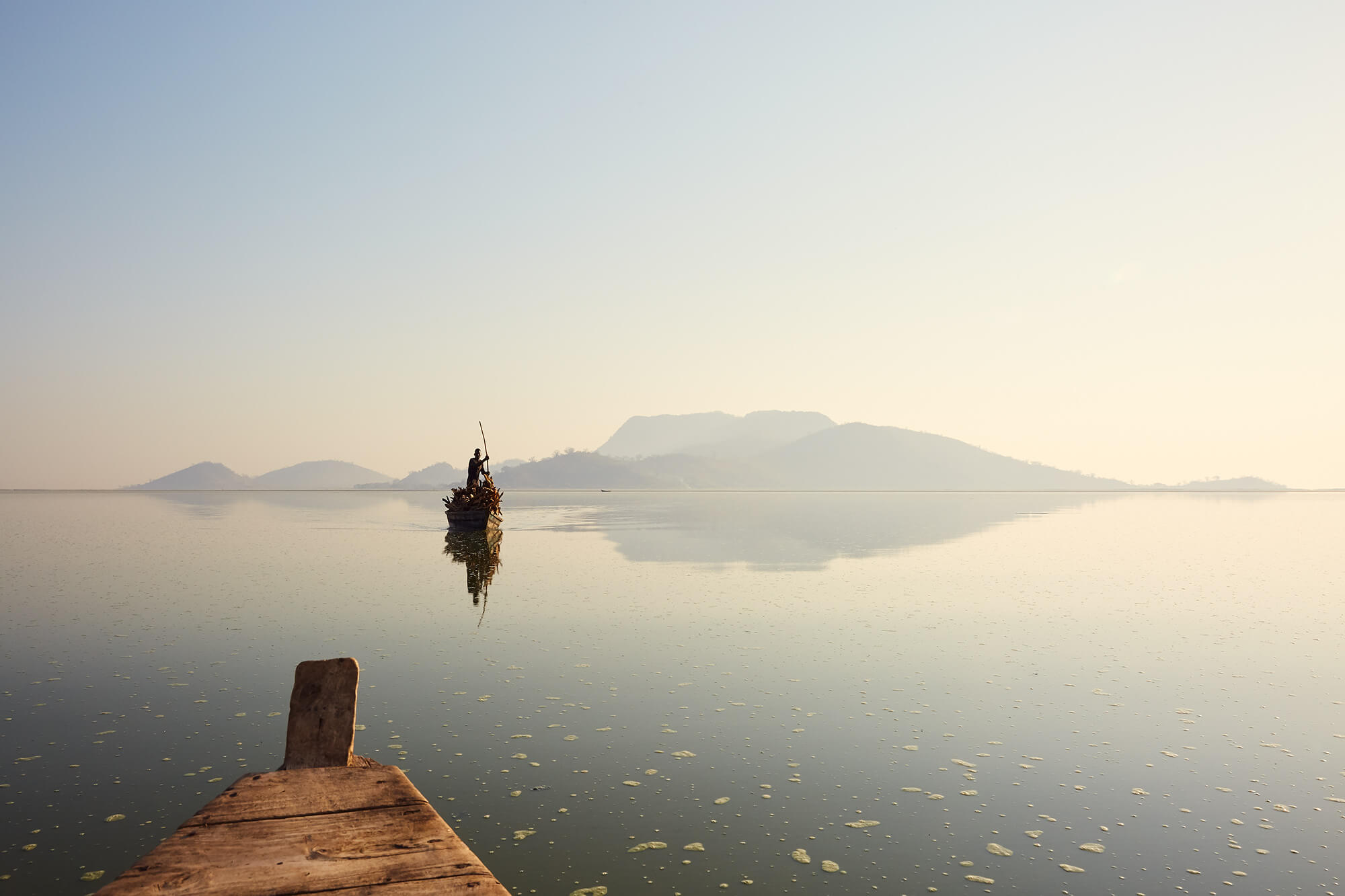 The Dark Secret Of Lake Malawi: Trading Sex For Fish

That unlikely phrase is used in some lakefront communities in sub-Saharan Africa and other parts of the world where men catch the fish and women sell the catch to local customers.

In Malawi, for instance, a woman may take a fisherman’s catch and promise to pay him once she’s made her sales. Only she might have trouble selling all the fish. So she might pay off what she owes for the fish by engaging in a sexual encounter.

Either the man or the woman “just suggests, let’s have sex as a way of compensating,” says Benjamin Kachikho, a project officer with the Malawi office of the Timotheos Foundation, which focuses on social issues such as education about HIV. 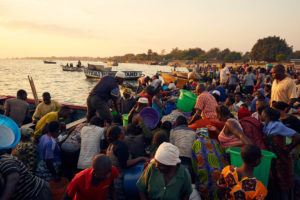 A crowd of fish traders forms around a boat at Lake Malawi laden with usipa, a species of small sardine-like fish that are dried and sold all over the country. Julia Gunther

Or if the supply of fish is low because of overfishing, several women may vie for a fisherman’s catch — and transactional sex may be used as a bargaining point.

The practice is “longstanding and quite engrained as a social norm,” says Patrick Higdon, director of programs at the nonprofit group World Connect, which has worked to address this issue in Kenya.

It’s also a practice that a community may not approve of. The fish traders often do not want their neighbors to know if they engage in transactional sex. 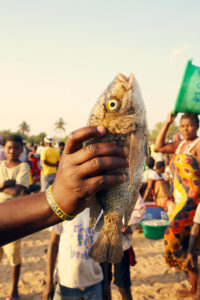 A fisherman holds up a chambo — what locals call a type of tilapia native to Lake Malawi. Chambo is one of Malawi’s most popular fish. Once it was plentiful, but now it is listed as “critically endangered” because of overfishing. Julia Gunther

Because of the furtive nature of the practice, it’s hard to estimate how many fishermen and fish sellers turn to this type of transactional sex.

But it is clear why it happens. “Poverty is the main reason for fish for sex,” Kachikho says. “If you are poor, you are stuck.”

Stuck — and at risk. Kachikho and others in Malawi and Kenya believe that fish for sex is a contributor to the spread of HIV in a part of the world where the rate of HIV is high. In Malawi, approximately 1 in 10 adults ages 15 to 64 is HIV-positive, according to UNAIDS — one of the highest rates in the world.

The fishermen travel to different fishing spots along the lakefront and then bring their catch to the local community fishmonger, says Alfred Banda, an outreach worker with Youth Net Counseling in Malawi’s Zomba district. If they have the virus, they can bring it into a community, or if they become infected in the course of their travels “they will transmit,” Banda says. “The more mobile they are, the more they endanger the health of others.”

“The fishermen want to mostly have unprotected sex,” says a 39-year-old woman in Chisamba Village, Malawi, who sells fish and sometimes engages in transactional sex. “They don’t like condoms.”

She was one of 19 women interviewed about the practice by the German photojournalist Julia Gunther, whose images are featured with this story. Partnering with videographer Nick Schonfeld, Gunther spent nearly a month in several villages in Malawi in 2018 to document the practice of sex for fish. Most of the women asked that their names not be used because of the fear they will face discrimination in their communities.

The 39-year-old woman told Gunther that even when she makes a profit on the fish, sex can enter into the equation. “The fishermen will say, keep the profit and I come to your house in the night. So that they sleep with me.”

Her comments also reveal the precarious life faced by female fish sellers. At one point, “some fishermen took my money and ran away,” she says. And “sometimes the fishermen are violent to me,” she says. “I gave money to a certain fisherman, and he did not give me my fish. I took his fishing net. He was threatening me that if I take the net, I am going to beat you.”

The women told Gunther they are embarrassed by what they do to survive financially. They do not consider themselves sex workers. They are simply women in tough circumstances, trying to eke out a living. Some are single mothers. Others try to sell fish to support a large family.

Gunther did meet several women who had moved on from selling fish. 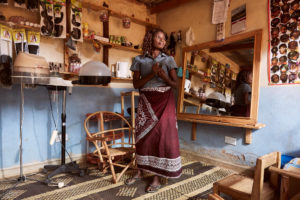 Chrissy Masala in her hairdressing salon in Mpyupyu, Malawi. For five years, Masala says she would have sex with fisherman and be paid with fish, which she would sell at local markets and big cities. But she felt that the community disapproved. Eventually, she saved enough money to open the salon in 2013. Julia Gunther

Chrissy Masala saved enough money to open a hair salon in 2013. “I decided to stop because of the stigma and discrimination against me,” she told Gunther of the years when she traded sex for fish. “I was judged by others … my parents, my children. Even I judged myself.” 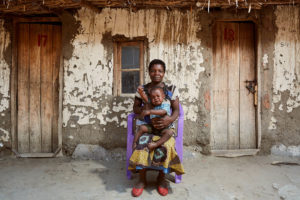 Catherine Kambanje with her 1-year-old son, photographed in the village of Kachulu on Lake Chilwa in Malawi. She says she traded sex for fish for seven years. Typical payment was a bucket of fish. She’d use some to feed her family and sell the rest. Now she burns wood to make charcoal, which she sells. She says she earns significantly less than she did before. Julia Gunther

Another woman who gave up the practice is Catherine Kambanje, who now burns wood to make charcoal, which she sells. But “nothing is changing,” she says. “I am still poor.”

Overall, Gunther says she came away from her month in Malawi with a sense of women in despair — and little hope for change.

In other communities where sex for fish occurs, nonprofit groups and entrepreneurs are working on ways to curtail the practice.

About seven years ago, representatives of World Connect met with a group of 30 or so women who are fish traders along Nyamware beach on Kenya’s Lake Victoria, about six miles south of the port city of Kisumu. The women came up with a plan that would enable them to stop offering sex to keep their business going. They wanted their own boats. That way, instead of depending on fishermen and their boats, they could hire men to fish for them, then sell the fish the men bring back to earn a living.

The women came up with an idea: “a project that would allow them to construct their own boats,” says Higdon of World Connect, which offered grants to cover the cost.

When the women had their own boats, “that really flipped the economic dynamic,” Higdon says. They were in charge. They no longer had to consider transactional sex as a way to negotiate for fish to sell or to pay off a debt.

The plan hasn’t been perfect. “Some women are more engaged and successful than others,” Higdon reports.

But he’s encouraged by the results, especially among boat owners who formed a cooperative — the No Sex For Fish Women’s Group. These women pool the money they’ve saved from their earnings to cover repairs on their vessels and to purchase new nets. And in 2017 they came up with a strategy to grow their business. They’ve purchased boats with motors that could go deeper into the lake, where fish would be more plentiful than in the overfished waters close to shore. They hire a crew of eight to do the fishing.

There’s also a new business in Kenya that seeks to stop fish for sex – and help local fish farms as well.

With investments and loans, Dave Okech set up Rio Fish in 2016. His plan is to connect female fish sellers with a different supply source — fish farms. To join his network, fish farms must agree to and sign a code of conduct to follow environmentally sound fish farming techniques and “not to engage in any activity that may lead to sex for fish,” he says. If violations are reported, the fish farm will be dropped from the network.

The fish farmers upload their daily production of fish on the Rio Fish system. Fishmongers can call Rio Fish’s office to locate the nearest supply of farmed fish, which they can purchase with an electronic money transfer service called M-Pesa, commonly used in Kenya. This fall Okech hopes to launch an app that will help people find fish farms. 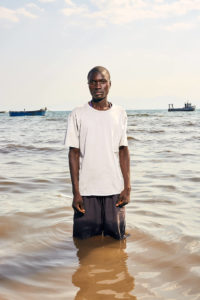 Fisherman Mekius Dominic stands in Lake Malawi. Dominic became a fisherman three years ago. He says he has never engaged in transactional sex but knows plenty of men who do. “My friends have said to me that I must do it. They force me to come with them and drink beer. Then they tell me I have to have sex with a woman there. But I do not do it.” Julia Gunther

If all goes according to plan, fish farmers will have an easy way to sell their fish, and fish sellers will have a steady supply and not have to resort to transactional sex to obtain fish or pay off debts. So far, Okech says, he is working with 200 fish sellers. The first year Rio Fish transferred 50 tons of fish and has since gone up to 300 annual tons a year, with fish available for pickup three days a week. His goal is 1,000 tons in 2020.

To earn money, Okech takes a commission from the fees paid, around 10%. He also has his own fish farm as part of the enterprise.

There are lots of questions about these programs to help stop “sex for fish,” says Seema Jayachandran, an economics professor at Northwestern University and the academic chair for gender research and policy work at the Abdul Latif Jameel Poverty Action Lab, a research center that studies the effectiveness of programs to reduce poverty. How many women try these strategies but then drop out? Is the boat-building program cost-effective? Are there other ways that women have figured out on their own how to move on from business dealings that involve fish for sex?

Nonetheless, she says, the boat-buying and fish farm interventions sound promising. One way to test their effectiveness would be to scale them up and see what happens: “Bigger reach is a good thing.”

The fishmongers interviewed by Gunther in Malawi are clearly ready for a solution that will mean they can stop the practice of sex for fish. A 35-year-old woman, divorced and the mother of three, told Gunther that she’ll say to fishermen on the beach, “I don’t have money but I want fish.’ Then we agree to have sex in return for the fish. That happens maybe once per week.” She says she is “HIV-negative” but “it is fate if you catch HIV here. That is normal.”

Reflecting on the way she earns her livelihood, she says: “I feel like there is no future in doing these things.” And she dreams of a life with “a stable family which can provide for me.” 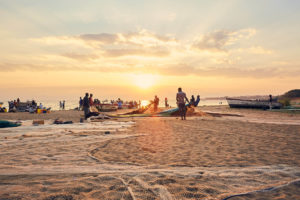 Shortly after dawn, fishermen untangle and lay out their nets at Makawa beach on Lake Malawi. Julia Gunther

TOP PHOTO: A fisherman’s boat makes its way across Lake Chilwa in Malawi. A large portion of Lake Chilwa dries out every year, and the fishing industry disappears along with it. Most fishermen then head to Lake Malawi, where there is fishing year-round. Julia Gunther

Julia Gunther’s photo project in Malawi was made possible with a grant from the International Women’s Media Foundation.

*This article was first published by NPR.