A Fight for Mother Nature: Why Female Students Are Now Leading the Climate Movement

On March 15th, 2019, around 1.4 million students across the globe participated in a climate strike. Students from 123 countries missed school to advocate for more comprehensive legislative reforms that addressed the impending climate change issue. Two weeks after this massive event, ten girls persisted in Manhattan. These seventh grade girls sat through the drizzling rain outside of the United Nations building with poster boards calling for climate justice as high officials marched by without even a glance. There were no cameras, there was seemingly no intention of ending their protests until their demands were met, and there were no boys. 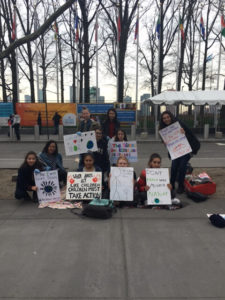 On March 29, 2019, ten female students protest for climate justice outside of the United Nations building in NYC. Credit: Madeleine Klass

These are not the only girls stepping up in hopes of achieving comprehensive climate legislation. They are part of a larger global movement led by female student activists like Greta Thunberg, a 16-year-old from Sweden who is now traveling by sailboat to NY’s climate talks on global warming; Alexandria Villasenior, a 14-year-old from New York and Jean Hinchliffe, a 15-year-old from Australia. These young women are rising up as a powerful force to challenge their governments and leaving many wondering why the leadership of the movement is so heavily weighted towards one gender.

I talked about this phenomenon with three high school students who have been inspired by the female climate leaders above and are all now activists in their own right:  Eighteen-year-old EstherGrace Devens, president of her school’s Queer-Straight Alliance Club; Natalie Sweet, 16, co-head coordinator for the environmental group Zero Hour NYC and a member of its national press team; and Rachel Lee, 16, the other co-head coordinator for Zero Hour NYC. Below is our discussion.

Madeleine Klass (MK): Why are female students (as opposed to their male counterparts) taking such an active and visible role in leading the climate movement?

Devens: “I think it’s just a mix of now empowering feminism that has driven women into general activism. And from that general activism, they’ve found, maybe a tighter niche which is the environment.”

Sweet: “I think it really just ties back to the whole ‘girls getting more involved in activism’ on a wider scale. How the Women’s March, even though it was only one day, really inspired, I think, a lot of women to join other movements.” 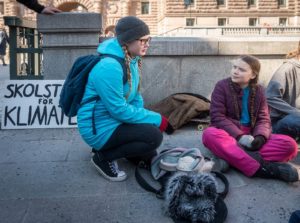 Greta Thunberg together with activists in the school strike for the climate outside the Swedish parliament on Friday, April 12, 2019.

Lee: “The ability to mobilize massive groups of people is considerably helped if you are able to make them feel included and make them feel like their opinions and voices are being heard, which again is a quality that a lot of teenage girls are able to bring to the table. I think that helps in drawing people in and starting a movement.”

MK: How is social media contributing to this phenomenon?

Devens: “We’re in a time of social media where technology is everywhere, and it has easily helped spread word of quite literally anything. I know it’s a stereotype, but I do think girls are more connected to social media, instagramming, than boys. And I think this might explain why girls are “the faces” in climate change.”

MK: Discuss women’s social activism now and in the past.

Devens: “Young women are so much more politically active than ever before. Justbecause of how our country’s laws are playing out, especially with all the abortion laws and the restrictions that are facing women right now, that is what’s driving women to be a part of this conversation and not leave.”

Sweet: “Women were really the people who were participating in environmentalism because as mothers, they were like, ‘Oh, it’s our duty to take care of the earth.’ And even though this may not have been the correct perception of being trapped in the social sphere of mothers, environmentalism was led by women.”… “There are many other movements that can be looked at as, ‘Oh, women started this.’ For example, a transgender woman started the stonewall riots that kicked off the pride movement in the United States. Women have definitely been just as socially active in past generations. I just think that it wasn’t as widespread and as known.”

Lee: “I do think that young women are becoming more socially active in political matters compared to past generations. In order for there tobe a change, there has to be some sort of societal change in order for people to be affected. So, I think, right now there is a huge push for social activism to become the new ‘cool thing.’ And to be a social activist, it makes you a bit more worldly… It’s like the new cool.”

These female student activists have found their voices through the climate change issue. They have emerged as leaders in this and other societal problems to spark change. And they predict that this wave of female empowerment will only grow stronger.

According to Sweet, “That is the dream. To see more women involved in higher positions where we are the ones helping to decide legislation. And I think having these types of movements which are women led, and not to mention, women of color led, are especially important in making sure that we have a say in our future.”

*Madeleine Klass is a high school student in NY.