WHAT IS A COMMUNITY ORGANIZER?

In this latest episode of Listen, Ladies, host Maryalice Aymong talks to Esther Beard, a community organizer who is currently living in the St. Louis, MO area where she works teaching low-income parents of color how to organize for community and systems change. Esther attended high school in Kansas City, MO and went on to earn a bachelor’s degree in sociology and a master’s in education.

Listen, Ladies (LL): Esther is a community organizer. We met this summer when we were both part of the Urban Leaders Fellowship in Kansas City, MO. That’s basically a program for early-to-mid-career professionals to focus on public policy and learn how to become effective leaders in their communities. This actually turned out to be, I think, one of the most meaningful interviews I have ever done. That’s because of Esther’s personal story and the obstacles she was handed at a really young age that were all out of her own control. Ultimately, she overcame that experience, all those experiences, and had a huge and extremely positive impact on the lives of others.

I’m wondering if you could describe for us what community organizers are and what they do because I’ve told some people about this interview coming up, and several of them only knew the term because that’s what Barack Obama did before he was the president. 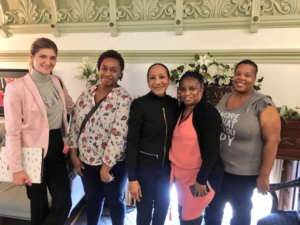 Esther: Well, a community organizer advocates first; they empower. And advocating is different from organizing because when you advocate, you’re speaking up for someone until they feel empowered enough to speak up for themselves. If you’re doing it properly, you’re showing them how to do it — so they’re right there when you’re advocating for them. They’re not like at home, they’re right there and you’re showing them “I care for you.” Also, organizing is building relationships of trust. They can’t trust me if they don’t know, for instance, that when I go to this meeting that’s about them—and things that affect their community and their lives—that I’m speaking up for them.  The best way to show them that is to bring them along. They don’t have to say anything as long as I’m doing the advocating and I’m speaking up for them. Then they feel, “Oh, I’ll mess with you, I’ll stick with you. I am going to do what I can to bring myself up to that level where I can speak for myself.”

LL: Who does a community organizer actually work for? You mentioned that you worked at one point for AmeriCorps.  Are you part of a non-profit at this point?

Esther: Yeah, I applied for this organizing position because in AmeriCorps, I was an education advocate for Land of Lincoln Legal Systems Foundation. They did a project, a pilot program, around education advocacy, and it looked just like community organizing because we have to go out there, knock on those doors, build those relationships of trust with the parents so that we could speak for their kids within the schools. So we have to do a lot of networking with the parents and connect them to the teachers so that their kids could get IEP’s, (Individualized Education Programs)  and even extra help through RTI (Response To Intervention). So, we have to advocate for all of that—and for tutors after school, so the kids can be on par and be able to complete whatever grade they were in.

LL: So this gets me into what I was hoping to talk about a little bit, which is  parents who are dealing with low incomes or problems involving where they are living or where they are from. They’re dealing with all these challenges, but these parents have the same general desires and aspirations that all parents do for their kids. So, I’m wondering, what are some of the biggest systemic barriers that the parents you have worked with and partnered with face? What are they confronting that other parents just walk right through and don’t even know is a problem?

Esther: Well, everything. The organization that I do organizing for is called COFI, Community Organizing and Family Issues, and their focus includes stuff as simple as recess in schools. For instance, there was a predominantly black school in Chicago that didn’t have recess for the kids. We helped parents at that school fight to get them recess. Another example is transportation.  Transportation in East St. Louis for kids who walked 1.5 miles, but that 1.5 miles is the state law. If you lived within 1.5 miles of your school, you have to walk but the conditions…

LL: …but there’s no school bus, so if you lived 1.5 miles away in East St. Louis, where it could snow…

Esther: It could snow, but there was heavy traffic being rerouted from another city, so the people weren’t stopping at stop signs, there were no sidewalks, there were people who got up and vagrants drinking in the park that the kids had to walk through, and it was K-4th grade.

LL: And that’s asking a parent who should be able to just put their kid on the bus and head off to work, to then either hope that they make it okay or have to walk. Then that’s for them three miles before they can go to work.

Esther: Yeah. Or if they can, because having a car is very rare there, a car that works.