The documentary NETIZENS, which premiered at the Tribeca Film Festival in 2018, features three women: Brooklyn attorney Carrie Goldberg, Feminist Frequency founder Anita Sarkeesian and commodities trader Tina Reine, who are the targets of vicious cyber attacks. The camera follows them as they confront digital abuse and strive for equality and justice online.

Cynthia Lowen, filmmaker and director of NETIZENS, discusses the upcoming community screening tour in the US which aims to “empower audiences to take an active role in fostering constructive digital communities,” according to the director. 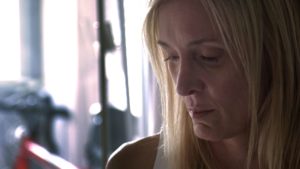 Tina, a target of online harassment featured in Netizens, directed by Cynthia Lowen. After an ex-boyfriend created numerous reputation-harming websites, Tina’s successful career as a commodities trader was derailed. Courtesy of Train of Thought Productions.

WAF: Why did you decide to do a film on cyber-harassment against women in particular?

Cynthia Lowen (CL): Although both men and women are targets of online threats, harassment, and privacy violations, I found that the ways in which women are targeted are unique and speak to the broader issue of gender discrimination and inequality in our culture.

For example, women are much more likely to be the targets of “revenge porn” or nonconsensual image exploitation. I think this is because these images are far more damaging to women than to men because of our attitudes about women and sexuality. When women are threatened with violence, those threats are generally very sexually graphic in nature and speak to the epidemic of sexual assault that plagues our communities and schools. Women are also more likely to be the victims of stalking and intimate partner violence, which has gone online in the digital age. As Anita Sarkeesian says in the film, “It’s not like misogyny was invented when the internet was invented,” but the internet has revealed a lot about the negative attitudes toward women that are pervasive and shown how determined some people are to silence women who dare to speak out.

WAF: Do you think online harassment is worse in the US compared to other countries? Is it a cultural, generational problem?

CL: “Netizens” has screened all over the world, from the US to Mexico to Russia to Ireland to Korea and beyond, and what I have found is that online harassment transcends borders. Although the ways in which it manifests are unique to different countries and cultures, what is consistent is that marginalized and vulnerable people are disproportionately affected and that women around the world are victims of intimate privacy violations—and it can have deadly consequences. I think the fundamental issue is that we are all walking around with very powerful tools—our networked phones and computers that are equipped with cameras and internet access—and that this is kind of the best and worst thing that has happened to us. On the one hand, it enables us to Facetime with family members around the world or organize transformative social movements; on the other it gives us the power to spread disinformation or humiliate people or foment a cyber mob with the click of a button. 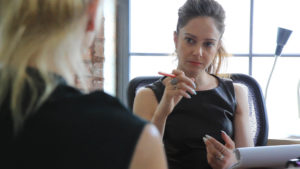 Sexual assault attorney Carrie Goldberg in her office with a client in Netizens, directed by Cynthia Lowen. Courtesy of Train of Thought Productions.

WAF: How do you think your film and these community screening tours you’re starting now will promote a call for action on policy makers and reduce online harassment against women?

CL: My hope for “Netizens” is that it can shift our perspectives about online violence from the notion it’s “not real” or “just the internet” to depicting how far-reaching this problem is. Through these community screenings, I want audiences to witness how every aspect of a target’s life is transformed—her personal safety, her ability to get a job, her education, her relationships with her family—and to hopefully understand the issue differently. It’s not just something that happens on the internet and stays online; these acts have very real consequences. We are all too tragically learning in the wake of an epidemic of mass shootings, that often the perpetrator had expressed violence toward women online beforehand. I hope that “Netizens” inspires audiences to feel that they do have to accept online harassment as a “normal” part of our digital communities and that they have agency to demand far greater safety and privacy protections from our tech companies, policymakers, and law enforcement official.

WAF: What’s next for you?

CL: I’m currently developing a new project about the role doctors played in the opioid epidemic—among some other things. Stay tuned.