KIPTEWIT, Kenya, September 29– As you walk into Beatrice Chepkirui’s homestead in Chabaibai village in Kericho County west of Nairobi, a freshly mounted graveyard welcomes you. Chepkirui sits down as she watches four men put up a structure for her here at her matrimonial home -her husband’s home.

It’s been weeks since the mother of five in her early thirties buried one of her three daughters.

14-year-old Jackeline Chepng’eno committed suicide after being period shamed and expelled from her class by her female teacher who had called her “dirty.”

Chepkirui painfully narrates how Chepng’eno took her life after she came home and told her what had happened at school.

“It was on September 9th. After telling me what she had experienced in school within sobs, she went down to the stream to fetch water for use in the house. At the time, we were staying at my mother’s place in Kabiangek, a few kilometers from here,” she says.

But her seventh-grade daughter never came back home from the stream.

“Hours later, her body was discovered lifeless hanging from a tree, ending the life of my promising child over a matter that could be sorted out,” she explains as she looks away, tearing with anguish.

This was Chepngeno’s second time experiencing her period, so she had inadvertently left her pads at home. She didn’t know her period would arrive that day.

“Her teacher was a lady, and I would have expected her to assist my daughter instead of ridiculing and humiliating her in front of her classmates”, Chepkirui  continues.

Chepkirui works as a casual laborer, picking tea in her neighbors’ farms and says that Chepng’eno always vowed to work hard so she could change her family’s situation.

A report by the UNFPA in East and Southern Africa has linked period shaming to serious human rights violations. In the US, 42 percent of women have been teased or outcast when menstruating. As normal as it is, menstruation is stigmatized around the world.

According to Unicef, lack of information about menstruation leads to discrimination and to damaging misconceptions about this normal bodily function  and can cause girls to miss out on school and on other regular childhood activities. Stigma, taboos, and myths about the process can prevent adolescent girls from developing healthful medical habits and can deny teenage boys as well as girls the opportunity to learn important aspects of human biology. 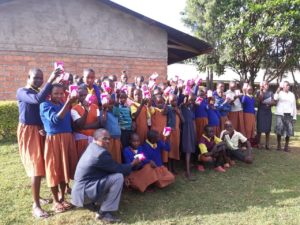 Across Sub-Saharan Africa, access to menstrual products is still a huge problem for many girls and women. Many girls choose to avoid school because they can’t afford tampons or sanitary napkins. Others even have to trade sex for the products, as seen in a recent Facebook video which school girls from war-torn Kapedo, Kenya appeal to women leaders, including the country’s first lady, Margaret Kenyatta, to provide them with sanitary napkins so they can remain in school.

In June 2017, the Kenyan Parliament passed a law ensuring that all public primary schools in the country are supplied with free sanitary napkins so that no girl misses school because of menstruation. This law was prompted by media reports that showed that girls and women across the country were using various awkward materials including cow dung, goatskin, pieces of old mattresses and rags, and even chicken feathers, as sanitary napkins while others simply used nothing and would just stay in isolation as they were deemed dirty and would not be allowed to go near elders in their community.

But there have been growing concerns about how the money allocated to distributing these sanitary pads has been used.  Reports indicate that many girls in schools (including those in Kabiangek) still lack the sanitary pads and have to miss school.

This was confirmed in August by Kenya’s Education Cabinet Secretary George Magoha who told The Star newspaper that, indeed, many girls do not receive the sanitary napkins. 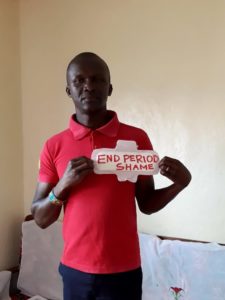 Koech believes that even though government policies are good, it takes society as a whole to change its fundamental beliefs about gender roles in order for girls and women to be treated the same as their male counterparts.

“The issue of stigma and shame is more of a social and cultural issue. It is about retrogressive cultural ways of doing things without being flexible to changes in a modern society. If we rely on government policies to eradicate it, it is like mopping the floor while leaving taps running. Government policies such as the free supply of sanitary pads to all school-going children will go a long way in mitigating the problem. But the main challenge is the poor implementation of the said laws and policies. Good on paper,” he says.

Kenya is hardly the only country home to period shaming… Nepalis practice something called Chhaupadi, the banishing of girls and women to huts or sheds when they have their periods.

Fortunately, in March of this year, the UK pledged £2 million to support organizations around the world to end period poverty by 2030.

After Chepng’eno’s death, Koech started an online campaign with the hashtags #EndPeriodShame and #EndWithJackeline to try and sensitize members of his community and everyone else online to ensure that no other girl takes her life out of period shame.

“Menstruation is not a women’s issue, it is a human issue,” Koech concludes.

TOP PHOTO: Beatrice Chepkirui holds her daughter’s framed photo as she poses for a photo near her fresh grave in Kiptewit, Kenya.