Nudity In Films Is Stopping Girls From Reaching The Top

It’s 2019. Never was there a better moment to be born a woman. There are more women than ever before in leadership roles and over the past year alone, we’ve had news of a female 007, Marvel’s first movie with a solo- female lead and a string of films focusing on the stories of strong, go-getting women.

And yet, according to a new research released today by Plan International and the Geena Davis Institute on Gender in Media, the 56 top-grossing films of 2018 in 20 countries still sent the message to girls and young women that leadership is mostly for men.

In these films, which earned more than $21 billion at the box office and were viewed by millions around the world, the sexualisation of women was a huge problem. Women leaders – be they presidents, CEOs or business owners – were four times more likely than men to be shown wearing revealing clothing; nearly twice as likely to be shown as partially nude and four times more likely to be shown completely naked. Male leaders were also much more visible than women: 42% of male, compared to 27% of female characters, were shown on screen as leaders.

Across the world, women still have a long way to go to claiming equal access to positions of power. They constitute 51% of the population, but hold fewer than 7% of CEO positions at Fortune 500 companies, just 18% of company board seats globally and less than a quarter of parliamentary seats. Films, like other forms of media, have a huge role to play in perpetuating this inequality. They do this by influencing how girls view themselves, and how they are viewed by others. Having women leaders as role models in films inspires girls to aim high. Having too few of them, as in the films we analysed, risks depriving girls of the inspiration they need to make their ambitions a reality. 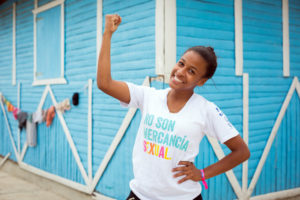 Nineteen-year-old Marelin lives in Punta Cana, an idyllic holiday destination for foreign visitors, where she sees vulnerable girls being exploited for sex by wealthy tourists and locals alike, while in the films and adverts she watches, girls are frequently portrayed as nothing more than sex objects.

Marelin, 19, a young activist campaigning alongside Plan International in Punta Cana, Dominican Republic, is convinced that the portrayal of women in films and advertising has a detrimental effect on girls’ confidence, which in turn affects their aspirations.

“In the Dominican Republic, films and adverts often focus on women’s bodies, showing women in revealing clothes, rather than showing their intelligence,” she said.

“I’d like films and adverts to represent women as more enterprising and determined, strong and powerful, so my message for the filmmakers and advertisers out there is that they should show women in roles like president, prime minister, entrepreneur or business executive so that it inspires girls to become leaders.”

However, as our research shows, even when cast in formidable roles, women are still frequently portrayed on screen as sex objects. This reinforces the still widespread belief that female bodies only exist only for men’s pleasure, it undermines women’s credibility and authority, and makes it harder for women to command the respect they deserve in their careers and in their lives.

Seeing women leaders portrayed in this way also reinforces girls’ expectations that leadership for women is not for them. Our research earlier this year found that 90% of 15-24-year-old girls believe women leaders aren’t treated as well as their male counterparts. The same percentage expect women leaders to be sexually harassed. These perceptions – which are only enhanced by the camera’s constant panning over women film stars’ bodies in slow motion – make girls less likely to rise up and claim the positions of influence they deserve and more likely to miss out on the right to change some of the sexist practices that make workplaces and society as a whole so unfair. 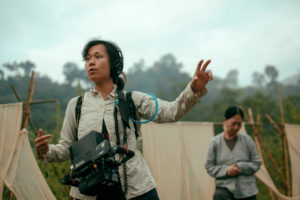 Ash Mayfair, age 34, was born in Vietnam. She is now based in NY. She made her feature directorial debut with the award-winning film The Third Wife about an arranged marriage in 19th-century Vietnam. Mayfair is now developing her second feature film, Skin of Youth, a love story between a transgender singer and a dog-cage fighter set in 1990s Saigon, Vietnam.

Changing the way films depict women – particularly women leaders – must become a crucial part of the movement to get more women into positions of power. This means getting more women involved in filmmaking. As the head of the BFI London film festival said recently, the people making decisions about the top grossing movies are still mostly male. Our research corroborates this: Not one of the top 56 grossing films globally in 2018 was directed by a woman; only a quarter had a woman producer, and only one in 10 had a woman on the writing team.

While it’s clear that awe-inspiring feminist cinema can be made by men (as this list of male filmmakers who have taken a pro-woman angle in their work demonstrates), we definitely need more women involved in and leading the process if we’re going to see the back of mainstream films that objectify women or consign them to inferior roles. Let’s fund women filmmakers and invest more time and money in women and girls as storytellers.

Plan International and the Geena Davis Institute on Gender in Media’s new report ‘Rewrite her story: How film and media stereotypes affect the lives and leadership ambitions of girls and young women’ is out now.