Civil Bikes: An Exciting Ride Tour To Discover The Contribution Of Women and People of Color in Atlanta

Maryalice Aymong (Listen, Ladies’ host): I was on an airplane traveling to New York for winter break when I decided to check out the magazine in the seatback pocket. What a great decision. I wound up reading an article about an organization called “Civil Bikes.” And I was so fascinated and wanted to learn more. The owner, Negra Deadwyler is today’s guest.

Civil Bikes is an organization that aims to bring people a historic look at the city of Atlanta based on the perspectives, experiences, and contributions of people who too often do not make their way into the history books: women and people of color. The way that she does this is through bike tours.

Throughout the trip, she is able to foster conversations about how history affects the way the city operates today, how it affects everything from housing to education to the economy. After speaking to her I wish every city had a tour like this one.

I could go on and on about how special and unique this is, but I think it is probably better if you hear it from Nedra. I hope you enjoy this interview. Here is my conversation with Nedra Deadwyler, the Founder and Principal Tour Curator of Civil Bikes.

Listen, Ladies (LL): I was wondering if there were a few locations that you typically bring people to and if you could give us an idea of what those locations are, what people are learning about them, and how you go about deciding where to bring people and what to tell them.

Some of my favorite sights? One would be the Oddfellows building. It was built but by a fraternal order, the Order of Oddfellows, and it was a black organization. These men were led by this man named Benjamin Davis Senior, who was a newspaperman. His newspaper was the Atlanta Independent. He was outspoken. For this reason, I feel like it is a great place to go because you can really look at what this early black regiment of builders, community leaders, business folks, entrepreneurs, where they were based, and it was all of this ethos of black uplift: uplifting the community, providing for the community, a place to be social, a place to have fun, a space to work, and make money. I appreciate that. There is also the newspaper featuring the written word coming out in this period of enslavement where blacks were not allowed to read and write. It was a wave of early black newspapers, and to be on that cusp, and to be caught up in that was profound. It was his view of who should have the franchise, who had the ability to vote, was an educated person, so it was not the full franchise for everyone. I would frown on that, but I do appreciate that he was really trying to get things done.

We started a new tour recently, “Radical Women.” And these are women who are changemakers, impact makers, leaders, people changing mindsets. My favorite person, Grace Towns Hamilton, her adult home is right next door to her childhood home. So, it is the Towns-Hamilton houses. She married a man, Alexander Hamilton, who came from a family of builders and contractors, so she had a Midcentury Modern house. Her family home had been this southern Victorian house, but it is in this area called Diamond Hill, which is one of the highest points in Atlanta. So, if you are standing there, you can really have a nice vista across the city. It was also right across from the Herndon Mansion. It is in this area that is right across from Atlanta University—so in the center of black wealth and intelligence close to where a lot of activism was taking place. 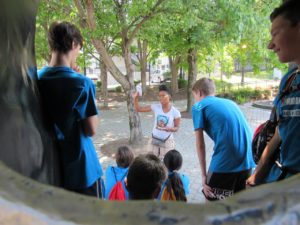 One other place would be the capital. There are only two statues at the Georgia State Capital that have some sort of nod to black individuals or anyone that is not white. And one is of Dr. Martin Luther King Jr., and that was only recently installed. But there was one in particular, a statue that was designed and created by this artist, John T Riddle Jr. It was commissioned by the Georgia State Black Caucus. It really is lyrical, lots of symbols of the plight of black people—from those who entered via slave ships until the end of segregation and mass terrorism, what we would normally call Jim Crow. There was a lot of violence and institutionalized violence that is remembered. It is fascinating and always a good conversation.

LL: I want to give people an idea if they are in Atlanta or visiting Atlanta of what they would actually be signing up for if they do Civil Bikes. Is this for anyone? If you’re a biker or a non-biker? Young? Old? Is anyone welcome on the tour? Can anyone experience it?

ND: For sure! It is open to everybody as long as you know how to ride. I am careful about the routes. Some of it is still major roads, but during the time of day we do the tour, we are really not interacting with a lot of traffic. And we try to be thoughtful about hills. We can’t really avoid them because Atlanta is a city of a thousand hills, but we try to only have one or two major hills. And the speed is pretty slow, and we have someone to support the ride (for safety), so it is not just me. But it is a leisurely ride.

LL: Do you provide a bike or do people bring their own bikes?

ND: It’s both. We have bikes, but people can bring their own bikes, and that is a lesser cost. I have ten bicycles that I use, and if I need more bikes, I will rent them from a local bicycle shop. Support someone else with that!