Ukranian-born Anastasia Mikova is the co-director of the film WOMAN, a truly inspiring worldwide project giving voice to 2,000 women across 50 different countries. The documentary, which took three years to make, offers an intimate portrait of motherhood, education, marriage, financial independence, menstruation and sexuality. Indeed, through the film the viewer gets to discover the voices of women as never heard before. 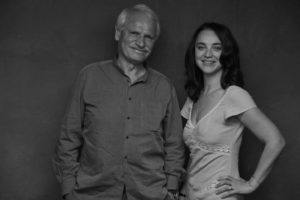 Mikova’s collaborator is the French director Yann Arthus-Bertrand, with whom she previously partnered on the documentary Human. According to Mikova, the aim of their new project was not only to focus on women’s rights and problems but to find solutions and to reconcile the two genders. “By making this film, I want women’s resilience and strength to be seen by every single person in the world,” Mikova said. “I want women to stop doubting and start believing in themselves, and I want men to stop being afraid of women and understand us better. To sum it up in one sentence: We want each and every woman around the world to feel celebrated by this film.”

Proceeds from WOMAN, which will be released on March 8, 2020, International Women’s Day, will go to an association called “Women on Media and News School”—or “WOMAN(s)” for short—that will sponsor different existing programs that help women around the world get access in the media professions.

WOMAN is available on @itunes and on @amazon, @google and @microsoft on May 12th.

Women Across Frontiers (WAF): How did the project of interviewing 2000 women in 50 countries came along and how did you pick the women for your film?

Anastasia Mikova (AM): We had the idea with my co-director Yann Arthus-Bertrand while we were working on our previous film, Human, a project already based on first-person testimonies. While we were making interviews of men, women and children from all around the world, we were struck by the difference between men and women in approaching an interview: While men would be quite proud and easily share their story, women would be suspicious first, wanting to understand the project and why we were asking all of these intimate questions. But once they were in front of the camera, something incredible happened: It was as if most of these women were waiting for this moment their whole life. As if all of the things they have kept inside for so many years could finally be released. This was a new situation because ten or fifteen years ago it was nearly impossible in some countries to find a woman ready to talk and share her personal experience in front of a camera. Whereas this time, everywhere, despite the difficulties and taboos, some women would come to us willing to share their story. And so, with my co-director Yann, we thought tha the timing was right and women were ready to talk but most of all needed to be heard. This is how the project started. It was almost two years before the Weinstein affair and the #MeToo movement. 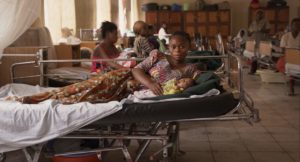 As far as the choice and selection are concerned, the idea was to have a mix of very universal topics, such as education, work and financial independence, motherhood or relationships with more specific topics we really wanted to highlight as directors: rape as weapon of war, excision or forced marriage. We also wanted to go and explore very intimate topics of women’s lives: sexuality, periods, and the relation women have with their bodies. Each time we would go to a country, we would have a “fixer,” a woman based in that country, generally a journalist, who would help us to prepare the shooting and who would work for many months in advance. The whole idea was to get that mix in every country: to have regular women from all paths of life and women with more specific experience. But what is interesting is that we never reduced one woman to one single topic. We asked all the questions to all the women. And sometimes a woman we came to interview about violence ended up in the film with a story of empowerment and success! And this what makes our project unique. We never knew what would happen during the interview and were always open and ready to be surprised.

WAF: Is there any interview that impacted you the most and why?

AM: I have obviously hundreds of interviews that truly moved me. But here is one which will always remain special. It was one of the very first interviews of the film. We did it at a conference for powerful women from all around the world called “Women’s Forum.” I remember seeing this astonishingly beautiful woman coming in dressed all in white and so self-confident. Her name was Norma. I remember thinking, “We would all want to look and be like her.” And then little by little she started sharing her story, and it was a whole different world from what I was expecting. When she was young and still living in Mexico, she was asked to take care of her grandfather who was becoming blind, and he took this opportunity to sexually abuse her during all her childhood. Then, when she became a teenager, she was offered a contract to become a model in Japan, so to escape this life of abuse, she accepted. And she found herself in a horrific network of prostitution and was sexually exploited for several years. She finally could get back home, then moved to Canada, got married and had a son. Her life was for the first time changing for the better… and then her son was diagnosed with the same sickness as her abusive grandfather and started getting blind. This was truly too much to handle. So, Norma started drinking. One night, as she was searching for the bottle, she thought, “I’m not alone anymore, I have a son to take care of. I can’t do this.” And instead of drinking, she put a pair of sneakers on and went for a run. This woman became one of the greatest marathoners in the world—she is even in the Guinness world records book for the longest triathlon ever done. And for me, Norma’s story sums up the whole message of the film : This is how strong and resilient women are! 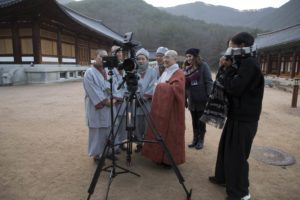 WOMAN behind the scenes

WAF: Several topics are discussed like domestic violence, reproductive rights, sexual assault, menstruation, motherhood, aging. Is there any topic you would have loved women to expand on more?

AM: You can always go further in developing this or that topic; it’s a never ending process. And also, when you have two thousand testimonies, you are always willing to add one or another one or change something in that or that part of the film…because there are so many great stories that we’ve heard! By the way, the editing of the film took nearly a year, which is VERY long for a film, and it could go on and on. Happily enough, we were chosen to premiere at the Venice film festival so we had a premiere date fixed for the first of September last year and needed the film to be ready. I’m happy it happened this way. If not, I’m afraid we’ll still be editing Woman.

WAF: You state in the description of the film that “Woman is a message of love and hope to all the women of the world, an attempt to understand their lives and to measure how far they have come and how far they still have to go.” And then you ask, “So how are we going to get there?” What would be your answer?

AM: There are a lot of things to change, both in terms of legislation to better protect women’s rights (the right to abortion, the right to be protected and listened to when you face violence, the right to get a proper education) but also at a family level (in some countries where laws exist, they are not really working because traditions are too strong and families prefer to follow them instead). So it’s really a process that should be done in parallel: both on a political and on a personal level. But there is something else on which I think we women need to work. It is the way we perceive ourselves. If you only knew how many women have told me during an interview, “But why do you want to talk to me? Why do you think I’m interesting? I have nothing special to share…you should better interview someone else.” By making this film, I want women’s resilience and strength to be seen by every single person in the world. I want women to stop doubting and start believing in themselves, and I want men to stop being afraid of women and understand us better. To sum it up in one sentence: We want each and every woman around the world to feel celebrated by this film.

WAF: Is it true that you are in the process of shooting a film with only men called MAN movie? If that’s so, which topics could you anticipate will be discussed? 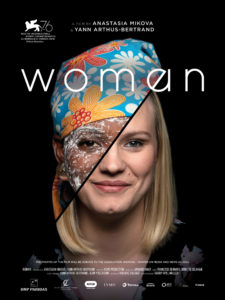 AM: For the moment, we are focusing on the release of Woman. It will be simultaneously released in more than 20 countries, so it is a lot of work! But it’s true that while we were editing the film, we would often ask ourselves what a man would say about this or that topic. How would a man react in this or that situation? And since we started to show Woman at different festivals around the world, each time someone in the room asks us the same question about men. So yes, we are thinking of maybe making a film on men. But to be honest, I think it will be more difficult because right from the childhood most men are told not to share their emotions and not to show their weaknesses, so even though our interviews are quite long and generally take around two hours, I’m afraid that to get to the core will take even more time with men!