A Rapist In Your Path: The Political and Global Impact of Chile’s Feminist Activism

October 18 in London, I scroll through Chile’s news per usual since I’ve been in London only a month working on my master’s degree in gender studies at University College London. “Student ambushes metro stations in protests over fare hikes,” the paper says. I’m shocked, frightened, and inspired all at once. A video captures a group of young women, high school students, breaking through the subway gates and jumping over subway turnstiles in a massive fare-dodging protest, igniting mass protests at a national level demanding structural changes to Pinochet’s economic and political legacy, particularly asking for replacement of the 1980 Constitution, which was drafted in dictatorship and that remains unchanged today.

Since the Chilean October Uprising, shocking figures from Chile’s Institute of Human Rights have come to light: more than 10,000 arrests, 3,765 people treated for wounds, 2,122 shot (445 of whom were shot in the eye), plus more than 194 complaints of torture and sexual misconduct by police authorities, including cases of rape. 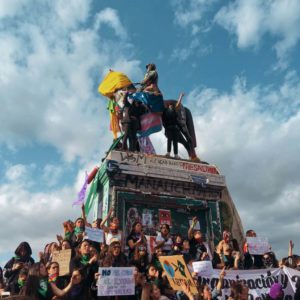 Organized by the feminist collective Las Tesis (“the theses”), on Monday Nov. 25, 2019, activists in Chile flooded the streets to protest violence against women in conjunction with the International Day for the Elimination of Violence Against Women. In it, activists performed A Rapist in Your Path, a choreographed anthem denouncing Chilean police sexual misconduct during the October protests but also condemning structural gender violence and disparity enabled by the State, the judicial system and even the president for failing to prosecute the men who commit it.  The discursive power of the chant is no coincidence. The song ironically appropriates its name from the Chilean national police anthem “A Friend in Your Path”, and it includes a critical re-reading of a distressing extract of the original lyrics:

“Sleep calmly, innocent girl
Without worrying about the bandit,
Over your dreams smiling and sweet,
watches your loving cop.”

The performance included squatting three times, an allusion to a torture technique employed by the military during Pinochet’s tenure (and still used by Chilean police officers today) in which interrogators search women’s body cavities, often making them strip naked first. The supposedly necessary process is both humiliating and a gross invasion of privacy. According to the Chilean Institute of Human Rights, it also often resulted in sexual misconduct by the interrogators.

A Rapist in Your Path is based on the work of Argentinian feminist theorist and anthropologist Rita Segato, who has written extensively on gender violence, arguing that sexual violence is a structural political issue and not a moral, personal one. “When a crime is committed against a man, it tends to be seen as a crime against humanity as a whole, while crimes against women are usually interpreted as crimes related to intimacy, eroticism, and for that reason, they are ‘minor crimes’ and singular,” argues Segato.When I heard Las Tesis invite women and those with “dissident” identities join them for a global performance, I immediately spread the word to Chilean feminists with the Chilean Assembly in London, which emerged after the October Uprising in London as a way to mobilize solidarity against Human Rights Violations in Chile. Then, together with a group of them — and joined by colleagues from Mexico and Panamá — we gathered enthusiastically to perform A Rapist in Your Path outside the Chilean embassy. The cathartic effect of the performance was undeniable. Paula Soto, a member of the Chilean Assembly in London, told a journalist who was there with us: “It’s difficult to explain, but I lost people during that time. One of my cousins was tortured and raped, and she took her own life years later. One of my uncles disappeared, and we know he was tortured.” She hadn’t spoke about this horrific incident for years, but the performance helped to unlock what was long buried. Furthermore, the longstanding femicide epidemic in Latin America has sparked recent unrest in different cities of the region where A Rapist in Your Path has also been performed, igniting heart-felt solidarity with our Latin American colleagues on site.

Latin America is not new to misogynistic culture, violence against women, or  femicide. Studies have shown that at least 12 women a day are murdered, often by partners, and according to data published by the United Nations on Nov. 24, 2019, one in three women is a victim of physical sexual abuse at some point in her life.

Millions of women in Chile feel Soto’s words deeply. Recently, thousands gathered outside the National Stadium in Santiago, in a performance called “Las Tesis Senior” which recruited women over 40 to perform A Rapist in Your Path. The National Stadium was a prison camp during 1973 Pinochet’s coup, where political convicts were tortured and murdered. Most of these women were survivors of the sexual torture during the dictatorship. These demonstrations provide an outlet for women to vocalize their anger and pain but also their hope and desire for unity. Said black activist Audre Lorde, “Anger expressed and translated into action in the service of our vision and our future is liberating and strengthening act of clarification.”

Judith Butler in her work Vulnerability in Resistance, also touches on the cathartic effect of political protests, adding that “Vulnerability is part of resistance, made manifest by new forms of embodied political interventions and modes of alliance (…) that hold the promise of developing new modes of collective action” using vulnerability “to aspire to equality, freedom and justice as their political claims.”

It’s no surprise that the discursive elements of a Rapist in Your Path and the song’s liberating effect resonated globally. To date, the anthem has been performed by thousands of women in 200 cities  throughout North America, Europe, Asia, and Australia. It has even  reached Kichwa, Shuar, Waorani, Achuar and Shiwiar indigenous women of the Ecuadoran Amazon and various politically relevant venues such as the Turkish Parliament and the Harvey Weinstein trial in New York. Different localities have changed the lyrics to reference domestic contexts and conditions. The anthem has also been translated into sign language to remain inclusive and push the message even further.

Las Tesis was build on the #NiunaMenos movement in Argentina and the #MeToo movement in the U.S., both of which paved the way for it. Both movements brought thousands of women across America into the streets to protest against femicide and sexual violence. These demonstrations further catalyzed a powerful feminist consciousness. As Sarah Ahmed points out in her work “The Cultural Politics of Emotions,” “Feminism involves histories of contact; feminism is shaped by what it is against, just as women’s bodies and lives may be shaped by histories of violence that bring them to a feminist consciousness.”

Furthermore, Las Tesis specifically recruited not just women to perform but also people with dissident identities, and members of marginalized groups to perform, such as blacks, queers and nonbinary individuals. Those with disabilities were given positions front stage. This exercise helps to challenge the universal homogeneous notion of women and highlight the contributions of intersectionality, especially within feminist activism. And it does so without glossing over the ways that women and their allies are differently positioned in relation to the state and face different choices that hold different threats.

After months of political unrest, Chile has decided to hold a referendum in April for a new constitution, replacing the Pinochetian neoliberalism that has failed to guarantee universal healthcare, education, and pensions in Chile, among things. Women demanded to have a place in the drafting of the new constitution through gender quotas. And since protests began in October 2019, feminists in Chile ’ have joined forces to form a new political party: The Feminist Alternative Party (PAF), inspired by Las Tesis. Rosa Moreno Moore is the president of the new party and who was exiled in Brussels for more than 20 years until 1997. She highlighted the pivotal role of women’s representation in political transformation when  said, “The only way to participate in the constitutional process without depending on the current political parties is precisely to give life to a new political force.” Women did not only ignited the October demonstrations, they remain a powerful voice demanding equal rights, a voice that already has had concrete social and political effects upon Chile.

From my home away from home, London, I’ll be at the polls in April as I continue to write my master’s dissertation on the Las Tesis performance and the role that the Chilean feminist movement has played globally. Education is fundamental in getting our stories listened to. As Audre Lorde said: “My silences had not protected me. Your silence will not protect you. But for every real word spoken, for every attempt I had ever made to speak those truths for which I am still seeking, I had made contact with other women while we examined the words to fit a world in which we all believed, bridging our differences.”

We need to keep writing, publishing, and doing our best from our different trenches and locations to build an even larger coalition to fight for women’s rights with hope, resistance, and dignity.

Dignity, it has been said, is the motor of change. As Gloria Steinem once said, it “plays as much a part in the destiny of nations as it does in the lives of individuals; that self-hatred leads to the need either to dominate or to be dominated; that citizens who refuse to obey anything but their own conscience can transform their countries; in short, that self-esteem is the basis of any real democracy.” And today, considering Harvey Weinstein’s conviction, women have demonstrated globally the power that comes to us when we unite, resist, and fight with dignity to say enough is enough.