Meet Andrea von Bujdoss, aka Queen Andrea, One of the Coolest And Most Unique Graffiti Artists in the World.

Andrea von Bujdoss, also known as Queen Andrea, is a New York City-based artist who specializes in fine art, murals, typography, and graphic design. She has been recruited by global companies and music festivals to amplify their messages through art. One of her recent pieces is a mural in Lower Manhattan expressing thanks to Health Care workers. But like so many other New Yorkers, Andrea was first exposed to the wonders of street art through the New York City Subways.

On this latest episode Queen Andrea talks to Maryalice about her incredible art, what motives her and the powerful messages of positivity behind them. Below is an excerpt from Maryalice’s interview with Queen Andrea. To listen to the whole episode, download Listen, Ladies in iTunes.

Listen, Ladies (LL): Anyone who looks at your Instagram page, or sees your work in person will be instantly uplifted by messages like “Love always wins” and “Better Together.” So I wanted to start out by asking: How do you see creative expression through art playing a positive role at a time like this. Especially when people are dealing with all kinds of challenges, whether its COVID-19 or just seeing the continued racial unrest, how does art play a role in a time like this? 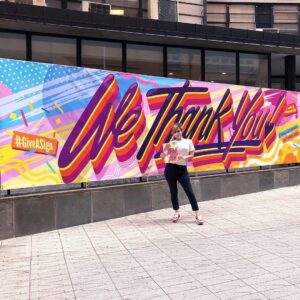 Andrea von Bujdoss(AB): Well I think it plays a huge role. Historically art has played a role throughout all these movements. At the beginning of the pandemic, I was wondering how this was all going to play out. There were a lot of questions in my mind especially with murals because I work outside so often. And the projects change, and the whole landscape changes, so I was wondering, what is going to happen? How will we express ourselves, were always out there in the mix? And low and behold, artists adapt, and creators are always figuring out ways to express their own sentiments about what is going on. We end up capturing sentiments amongst a lot of people. It is wonderful in that way. We take feelings and we either illustrate them or paint them, large scale, small scale, any scale. In any way that we do it. And it really helps people to process feelings and to know that art is always
there to express what is going on. It is very heartwarming. It has been wonderful to see what has been happening. During the pandemic, the messages that I was painting were very different from what is going on now. Actually, I did this project in Manhattan, on 21st Street and 5th Avenue, it was a store closure. I painted all these cool messages onto the boards it is in an excellent location, a lot of New Yorkers walking around even at that time in May. A couple of days later, the George Floyd incident occurred and the entire landscape changed. It was so weird to me because just a few days earlier I was in that area painting, and then it was just swept with the protestors, with rioting, with people looting stores. It was really fascinating for me to realize that there is so much happening out there, from one moment to the next the entire sentiment in the city and in the entire world changes. Then the artwork changed. People were doing different things on boards. It was all empowerment, Black Lives Matter. It was incredible. I could not have done that project in the aftermath of that incident because I would have been like trampled with protestors. It has just been a really tumultuous time in some ways. Also to do these public works because you can feel what is going on in the street. Most artists are a little bit more tuned in and sensitive and there is really a lot happening so I commend everyone who is out there doing it because it is not easy, especially now. We need artists, to help us navigate our feelings and to help us feel good at least about what is going on and to have hope. I think art a lot of times plays that role. Which is what I try to do as well.

Listen, Ladies (LL): How have these recent events inspired what you’ve wanted to create? Did you have projects you were working on before that just shifted based on what was going on and new messages that you wanted to get across?

Andrea von Bujdoss (AB): For sure! A lot of my work tends to focus on these messages of positivity. When I first started doing these phrases it was hopeful, now it is a little more hopeful. I’ve also done phrases like “Hustle Hard” and “The World is Yours.” Some of them are really brash and empowering, but now it’s gone a little bit deeper. It is about togetherness and unity and equality and these really important social issues. I had already been moving in that direction and the reason why I had wanted to do phrases instead of what I had been doing throughout my entire graffiti career was that I wanted to broaden my skills and learn different ways to create different letters, on large scale. Because painting on a large scale is unlike anything else, it is quite a challenge in itself so I wanted to get better at what I did. So I started doing these phrases and it has been great. It has been a fantastic journey. I have painted all over the place, all over the world, different countries and it is really just. It is such an interesting journey because it is endless. Graffiti itself is fascinating because you develop a style and you stick with it. In graffiti, you do not have many different artists who want to try all these different things, because, in graffiti, you want to have a certain style that you are known for. But I was able to develop a system where I was able to do any phrase and I can explore different styles and that also does lead to commercial opportunities because companies are looking for that. And they look to certain artists for certain styles of topography especially large scale and also digital small scale. So it has been a really great outlet for me. I started as a graffiti writer which helped me to just know what I was doing out in the street. But I love the diversity of what I do now. It is quite satisfying. 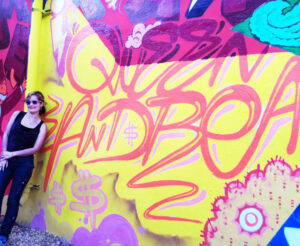 Listen, Ladies (LL): You were talking about wanting to improve your skills and getting something onto a large mural is obviously a complicated process. I am wondering if you could talk a little bit about how that comes together. Do you have an idea and then do it on a small scale model first, and then go to a larger space? How does that work because I am always extremely awestruck when I see a mural and everything is extremely perfect. I am wondering how that comes together.

Andrea von Bujdoss (AB): Well it is interesting. I learned that when I was just a young kid. I started doing graffiti on the walls when I was about 14. You always have a sketch first. And graffiti writers, what we do, continuously sketch into black books and try different letter styles and then color them in. It’s a huge part of graffiti culture, black books. After you do all of your sketchings, you take it to the wall and you get your colors to match your sketch, or just freestyle your colors. And then you transfer it from your paper sketch to the wall. It is not easy! I learned that early on. It was really just practice and doing it over and over again. It was figuring it out. This part did not turn out the way I wanted it. Next time just try it again. It was just a process of learning. And then later, as I was doing these largescale works, I started to use different techniques because they were for really important murals. For example, they were for the City of New York and other agencies. Where I had to up my skills in order to create these big works. So I do a method that’s really been used for thousands of years, the grid technique. You basically take your artwork on paper, put a grid on it, draw the same grid on the wall, and transfer all the information. Duplicate the information that you are holding in your hand to the wall. That is used by a lot of different companies. There is a mural company called Collasual Media, you’ve probably seen some of their murals. They do hand-painted advertising and they use that technique. I am sure Michael Angelo and a lot of other artists have done that too. That really helps me with large scale works but it is really different from graffiti. Now I switch, I go back and forth. I do these professional jobs where I have to scale out everything perfectly and I do graffiti where it is just freestyle half the time and you’re going with the flow and it is not perfect but you use a different set of skills. So I do both!