What’s it really like to report from a war zone? Work on an undercover investigation? Be a humanitarian photographer capturing images in the far corners of the earth to influence our hearts and minds?

We are honored to introduce a superb new podcast, Storytelling For Impact. Conducted by international journalist and NGO storyteller Susannah Birkhood, Storytelling For Impact is an amazing way to learn about the inspiring work done by courageous and trailblazing storytellers from all corners of the world- their adventures, struggles, impact and the ethical dilemmas they face. 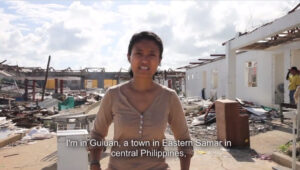 In this episode Susannah talks to Thin Lei Win. Thin is a freelance journalist living in Italy and covering food security and climate change globally after nearly 13 years reporting on environmental and humanitarian stories for the Thomson Reuters Foundation. Born and raised in Yangon, Myanmar, she is also the founder and former chief correspondent of Myanmar Now news agency and co-founder of the non-profit storytelling project The Kite Tales, which chronicles the lives and histories of ordinary people across Myanmar. Susannah and Thin discussed whether the foreign correspondent model is due a reckoning following a recent reporting trip by CNN International to Myanmar to cover the country’s recent military coup. The media outlet was widely criticised for the trip, with many accusing it of downplaying the role played by local journalists and for causing harm as 11 local sources were arrested after speaking to CNN’s reporter.

Below is an excerpt from Susannah’s interview with Thin. To listen to the episode, download Storytelling for Impact on Apple Podcasts, Spotify or visit the website.

Storytelling for Impact: Your perspective on Myanmar and the international work that you’ve done is a big reason that I want to talk to you today because I’m keen to really dig into this question of ‘has the foreign correspondent had its heyday – is it time for reform?’

Thin Lei Win: My biggest criticism with parachute journalism would be that we take local reporters for granted. We sometimes call them fixers when they are actually the ones that have the local knowledge and the context and the context to make the story come alive.

A lot of us, we jump in, if we’re lucky we spend a week trying to cover the latest disaster or conflict. It is the local reporters that bring in such an important viewpoint. And we don’t give them enough recognition and acknowledgement. And I think that is the biggest issue I have.

And I think that is the one thing that also really needs to change because I don’t think parachute journalism going to end. At least I don’t think it’s going to end anytime soon. There will still be people jumping on planes and getting into conflict zones.

Storytelling for Impact: Do you think that the CNN trip is indicative of a wider practice within parachute journalism – and I’m thinking particularly of the harm that many perceive was done with this latest trip, most tangibly, with these 11 individuals who were arrested after speaking to the journalist. Do you commonly see harm being done with reporting on humanitarian crises?

Thin Lei Win: I think always at the back of my head, when I am taking a picture or interviewing someone who has fled war in their home state or who had lost everything to an earthquake or a cyclone, I’m always wondering: “Would I ask the same questions, would I do the same thing, if I was in a developed country? Would I just walked into a hospital or a refugee camp and then just start taking pictures without asking for permission? And it’s something that I do struggle with. And I think a lot of other journalists I know do as well.

When I was reporting on the Rohingya crisis in Myanmar, that was really worrying – from about 2012 until about 2016. And it was just really difficult because we do want a colourful story and I was doing humanitarian reporting.

So in some ways, there is a delicate line between being a journalist where you are just reporting and informing, versus being an activist where you are advocating and agitating and the Thomson Reuters Foundation was very, very clear that what we were doing was journalism – we did factually accurate and balanced reporting, we didn’t advocate or agitate.

But we still wanted individuals with experiences that would affect readers, that would touch readers, that readers could relate to. At the same time, we needed to really make sure that when we left the displacement camps or when we pulled back and did our reporting that they – who are left behind and stuck in those camps – didn’t face any retaliation from the state or other people. That’s always a really, really hard balance to make. A lot of it comes down to giving people anonymity, changing their names – but you still need visuals. Right? You still need great pictures. You still need great videos and you can’t always blur people’s faces. And sometimes people do want to be featured like for this particular example – this was in Thailand and we were interviewing this Rohingya woman who fled and was stuck in a woman’s shelter in Southern Thailand and her husband was already in Malaysia and he really wanted her and their children to come to Malaysia to be with him. And there were these human traffickers that would pray on that desire to be reunited with your family. What they would do is they would turn up near these shelters and talk to the woman and then say, Hey, we can help you. And this poor woman, you know, one day snuck out of the shelter to go with these guys because she thought that they were going to traffic her across the border to Malaysia, where she could be with her husband. 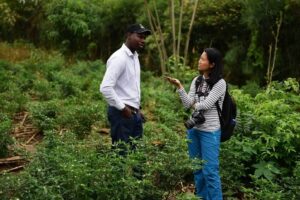 Unfortunately, they were taken to another house where she was just raped repeatedly by these men. She managed to escape. I mean, just horror upon horror. She managed to finally escape and go back to the shelter, but then of course she shouldn’t have snuck out of the shelter. That’s the Thai authorities’ view.

So she was sent to a police station where she spent time in a jailhouse, because she broke the law by leaving the shelter. And we interviewed her and took pictures.

And when the story ran, obviously it was really powerful, but we got a bit of pushback from some of the aid agencies for featuring her face. They’re like: “She’s going to be stigmatized.” And we were very aware of it. We had a, a Rohingya translator and myself and the translator, we literally sat her down and repeatedly explained to her what the process is and told her, look, this is an international news agency. We can number one, change your name. Number two, not show your face because if we do any of those things, the story and the picture will appear in probably thousands of publications and it will stay online probably forever – going into real detail, the minutia of what the implications could be.

She was an amazingly brave woman. Yeah. From a tiny village in Rakhine, not educated, but she was just like, “no, I want my face. That one, my name that, because I don’t want other women to be taken in like I do.”

This is a woman who didn’t really have access to internet, so just to get her to understand, I feel we did everything we could, but there are times when I’m thinking, “Did we? Did we do the right thing?” Maybe I should have taken the decision away from her. Maybe I should have said “no, no, we don’t do this.”