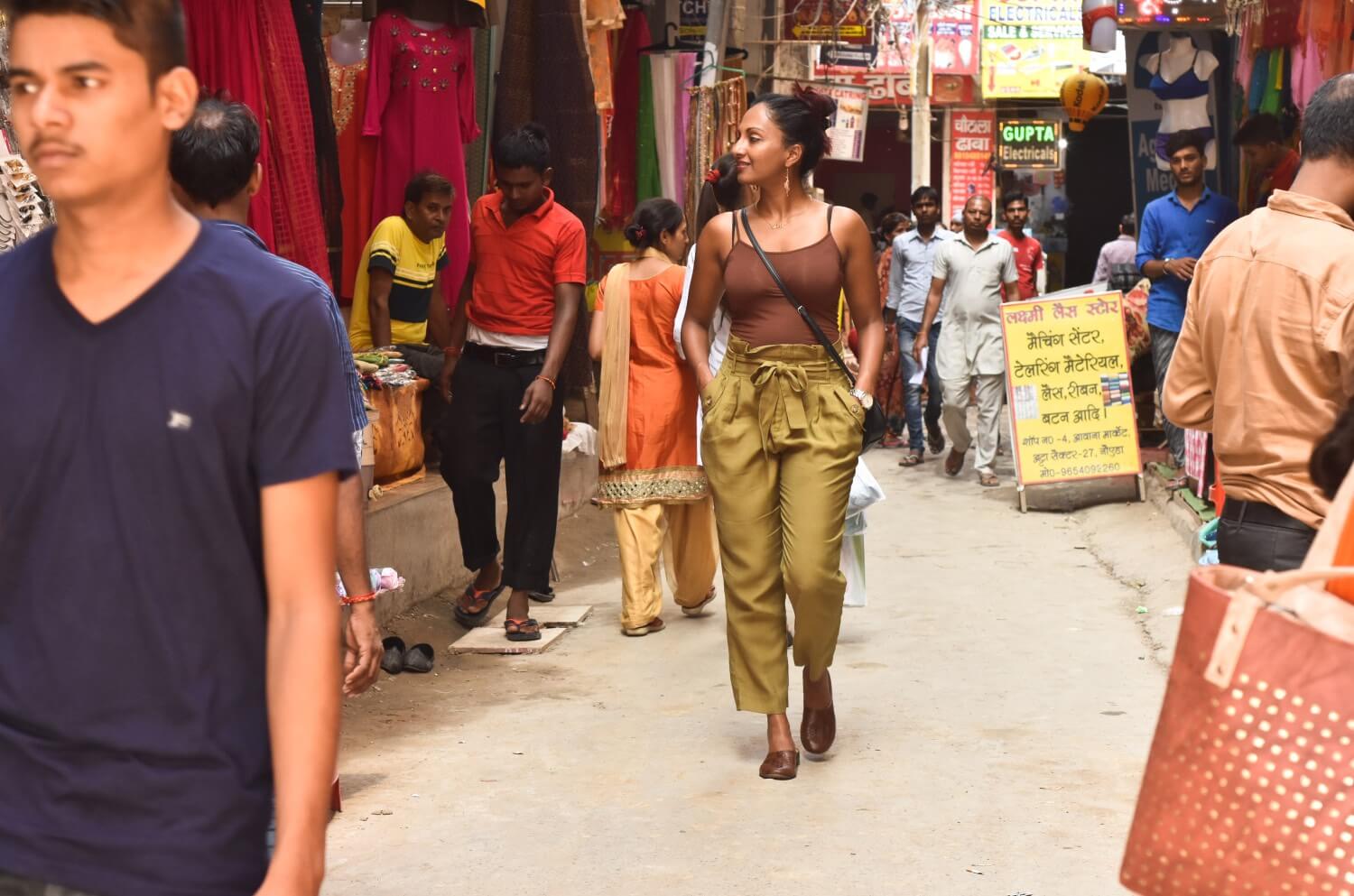 Sarika Bansal is a journalist and author based in Nairobi, Kenya. Sarika was the founder and editor in chief of BRIGHT magazine, an award-winning digital magazine that told fresh, solutions-oriented stories about social change. In June 2021, she published Bright magazine’s final project, Tread Brightly: Notes on Ethical Travel – a collection of essays which to gets to the heart of what it means to travel ethically. She has been published by the New York Times, Al Jazeera, The Guardian and others, and developed curriculum and tools for journalists at the Solutions Journalism Network.

In this episode, Sarika chats to Susannah Birkwood about the moral quandary that is voluntourism. Together, they consider: Is there an ethical way for a young, privileged person to spend time in a poorer community? How might they channel their good intentions in genuinely useful ways?

Below is an excerpt from Susannah’s interview with Sarika. To listen to the episode, download Storytelling for Impact on Apple Podcasts, Spotify or visit the website. 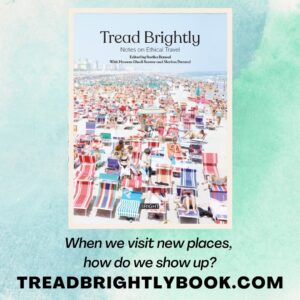 Sarika Bansal: Yeah, so since Bright ended is when I started working on this book, which was just released called Tread Brightly: Notes on Ethical Travel.

Storytelling for Impact: Can you tell listeners a little bit about it?

Sarika Bansal: Yeah. Tread Brightly is a book of 17 essays. It originally started with Bright magazine as a crowdfunding project and I just had this nub of an idea that came to me so quickly. It’s something that I’ve sat with for so long, which is, when you travel the world, when you visit a new place, how are you showing up? And I think it’s just a question that I’ve had in my head for since I was like 19 years old or so, and I really started thinking about myself at that age and how much I would have loved to have something to reflect those questions back to me and not tell me what to do, but just at least offer some ideas, gently, because I think that people don’t like to be told what to do. I don’t think it works very well. And it’s just kind of grown since then, and so we’ve worked with people from around the world to, to just tell really vibrant stories.

Storytelling for Impact: You’ve written an article about volunteerism in particular, which was published in the New Humanitarian, and one of the questions that you ask and answer in that, I wondered if you could answer for listeners again. Is there an ethical way for a young privileged person, as I was, to spend time in a poorer community in another part of the world? How might they channel their good intentions to affect change in the world, but in a way that’s genuinely useful and impactful and doesn’t do harm?

Sarika Bansal: Yeah. It’s a really good question. And I think that even posing that question to people who are young and privileged and have that desire already does so much good, because I think that so many people are just taught that, you know, Oh, you have so much to offer the world. You should go to someplace that’s less privileged and just do things. And there’s this assumption that because you come from a place that is more privileged, that you have some inherent capabilities to just show up, in a poorer community and do things that are good for them. And I think that that’s just part of the culture, that it’s just like you see these poor, sad children with their big eyes and, you know, flies in the eyes and whatnot. And you just have, we just have all of these images. And I think that there’s just this knee-jerk reaction to just reward the good intentions of those young people who want to go. I want to recognize and acknowledge that those are good intentions. Those good intentions can lead to really wonderful places. They can lead to people making the career and life decisions that are, that will just, you know, set them on certain paths for decades. And I don’t want to just tell people like “no, stay in your bubble and don’t leave ever”, because you’re just going to make a big mess of everything because that doesn’t help anything. And the other thing that comes often from internet strangers, otherwise, is just mockery and just, you know, these like memes are just like, oh, look at these clueless idiots who are just going into places and doing nothing. Yeah, and I think instead of that, how can we offer genuinely helpful suggestions to people? I think so much of it honestly comes down to mindset. First off, right now a lot of people go in and they have a mindset of I’m here to save the world and that’s what I’m coming to do. I think I had that mindset a bit when I was 19 years old, that I thought that I could just go places and just help people and be a force of good and they will feel my impact after my two weeks in their community. And of course that’s just not going to happen.

I think just scaling down notions of grandeur is already such a big step and understanding that maybe for you, a two week trip is really big thing because maybe you haven’t travelled before and this is your first big trip out of your home community, but for the people who you’re going to, two weeks is just a blink of the eye and it’s not going to make that much of a difference, no matter how much great work you do. And I think that just, you know, helping people just realize that is one really big step in the first place.

Storytelling for Impact: Right. Well, I think that this topic is in itself enough for a whole podcast series, but the subject of today’s podcast is actually language. And how do you use language to tell stories that empower the contributors and the communities that we’re writing about how to uphold that dignity? And I know Sarika, this is a subject you’ve written a lot and thought a lot about, and I’m curious to get your take on why is it that the language we use matters?

Sarika: Honestly, I think that the idea for language is not dissimilar from the conversation we were just having about voluntourism. I think that in volunteerism, you have people with much more power and privilege coming into another community and effecting change and then going back.

And I think that so much of NGO language when it comes to international development, even the word ‘development’ itself, carries a lot of those same notions of ‘Who is the insider? Who is the outsider? Who is the person who has the power and privilege, and who doesn’t? Who is sitting in the seat of power and who is just in the community where decisions aren’t being made? And I think that, so much language just reinforces a lot of those stereotypes. And I think that it’s such an opportunity to upend that and really also upend those traditional notions of who is the decision maker in certain situation.

Storytelling for Impact: And a lot of people are moving away from the term ‘beneficiaries’. It seems to slowly but surely be becoming taboo in the NGO space. What do you think about ‘beneficiaries’?

Sarika: So ‘beneficiaries’ – I think also does a bit of the same as ‘the voice of the voiceless’, which is that it implies that the person who is doing is the one who’s more important because when you hear the word ‘beneficiaries’, that means that that person is benefiting. And it also implies that that person isn’t doing anything in the process, that they are just the ones who are receiving. And it’s like when you’re receiving a gift: you’re supposed to just be grateful regardless of whether you wanted the gift or whether the gift is helpful.

And it just takes away the agency from that person to take part in their destiny and maybe they didn’t need that well in their community and maybe they don’t want that orphanage there because the idea of there being orphans is a bit of a fiction to prop up a voluntourism industry and all of a sudden you’re supposed to be a beneficiary and just sit down and shut up, take your gift and understand that this person is giving it to you with the kindest intentions. And therefore you don’t need to have a voice in that matter.