Around the world, International Women’s Day celebrates the progress that has been made towards achieving gender equality. This is not the case in Sudan, reveals an insightful conversation with Sudanese activist and Fulbright scholar Wala Ali Abdelbassit Zaid.

On March 8, thousands of people, both men and women, gathered peacefully in Khartoum, the capital of Sudan, to advocate for women’s freedoms, as part of a new wave of anti-military protests. Instead of changes in the political agenda, they were met with violence: African news website AllAfrica estimates that at least 54 civilians were injured after Khartoumese security forces used tear gas, rubber bullets, stun grenades, and automatic weapons against the peaceful demonstrations. 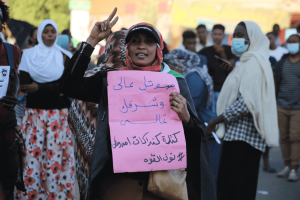 “Right now everyone is trying to understand and explain what is happening, everybody is angry or upset…”, explains Wala Ali, women’s and youth rights activist, researcher, and visiting Fullbright scholar at New York University’s Center for Global Affairs. “There is a lot to be said about these incidents… They show how difficult the fight for women’s rights is in Sudan… and how quickly things can go from support to aggression”.

Physical violence is just one of the many forms of gender-based violence experienced  by women in Sudan, one of the few countries–including the United States–that have failed to ratify the Convention on the Elimination of All Forms of Discrimination Against Women (CEDAW). Child marriage, female genital mutilation, dress codes, and religious traditions that strictly circumscibe women’s autonomy, remain widespread in the North African country.

Wala connects all of these issues to a common, underlying problem: a general lack of understanding of the meaning of feminism and gender.  “One of the main issues is the awareness of these concepts, what they mean, how they affect everyday life of women and men, and how we go about creating a more equal society”, she explains.

Ignorance of  the inherent value of gender equality fostered resistance to women’s activism from multiple sectors of society. “A lot of activists were targeted during the march by the military but also among the youth … This stemmed  from a  lack of awareness of women’s issues and what kind of spaces women need”, she explains. “There is a case of cognitive dissonance because some men do want to be feminists but they don’t know the extent of what they can accept, and let go, letting women lead.” Generational divides have also come to the fore during International Women’s Day events. “The events show… the reluctance of older generations of activists to allow the new generation the freedom of expressing their rights.” 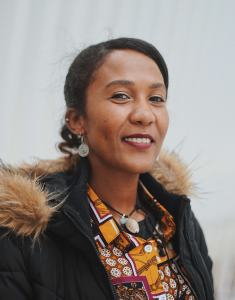 “Up until my professional years, I wasn’t fully aware of the inequality that women in my country were facing (…) it was a journey. Throughout the way, I got to understand more and more what my role can be”, reminisces Ali. Through her projects, Wala has found different ways to incorporate gender into her work in the hopes of fostering gender awareness. In the Youth Forum Organization, a youth-focused Sudanese NGO, Wala launched a gender unit responsible for gender mainstreaming. In 2020, she created a Facebook page, The Feminist Club Sudan, to build a community with knowledge about Sudanese feminism and to celebrate the knowledge production that Sudanese women bring to the struggle for gender equality. “It is designed to share content in Arabic about feminism and raising awareness of the concepts (…) in very simple terms. It’s not just for someone who knows or reads the books or has a specific ideology… Anyone can be a feminist.” The page currently has almost 900 followers.

To continue her activism and bridge the gap between awareness and action, Wala is using her Fulbright fellowship to research the Sudanese 2018 December uprisings, where women’s activism played a central role. According to Wala, resistance to women’s activism on International Women’s Day was directed at non-traditional women with loud voices. “When you have a voice and you try to change stereotypes you are targeted and it is easy [for your rights] to be violated”, she explains.

Now, more than ever, Wala urges us to lift women’s voices and stories. “This is an opportunity: the revolution has opened up many different avenues and if we don’t use them to discuss issues like gender-based violence and rape we may not get this chance again”.

Read more about Wala and her time at NYU here.

*Pía Madanes Quintanilla is an M.S. in Global Affairs candidate at New York University, concentrating in peacebuilding and gender studies.

*Becca Leaman is a Program Coordinator at EcoHealth Alliance and is currently pursuing a Master of Science Degree at New York University’s Center for Global Affairs with a concentration in Global Gender Studies.