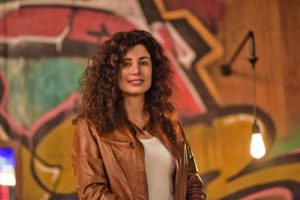 A provocateur, Haddad openly challenges in her writings traditional norms of Arab femininity and the controls imposed on women’s lives, capabilities and bodies by Lebanon’s profoundly patriarchal culture. Her first essay, I Killed Sheherazade (2010), was simultaneously an indictment of the violent oppression of Arab women on may levels and the Western Orientalist gaze to which Arab women are subjected. As an alternative, she calls for opening spaces for self-determined sexual expression for and by Arab women themselves. Her magazine, Jasad (“body” in Arabic), was the first magazine in the Arab world dedicated to the “art and science of the body.”

In 2018, Haddad, who has become a staunch critic of organized religion, ran for the Lebanese parliament, campaigning on a platform of secularism and for a reform of the country’s sectarian personal status codes, which she views as keeping women as second-class citizens.

She has repeatedly been named one of the 100 most influential Arab women, has published 15 books between poetry, non fiction, theater and novels and speaks seven languages fluently.

Joumana Haddad is WAF’s Woman of the Month for her fierce defense of women’s rights, free speech, and the power of the human spirit.