WAF names Rita Segato, one of Latin America’s most celebrated feminist public intellectuals as the second Woman of the Month.

Born in Buenos Aires in 1951 and trained as an anthropologist at Queen’s University in Belfast, Segato has put exposing—and combating—the violent dynamics of sexism, racism and colonialism at the center of her professional work. After conducting extensive research on the motivations of convicted rapists in the prison of Brasília in the mid-1990s, she was among the first Latinx feminists to identify sex crimes as “crimes of power, of domination, of punishment.” Determined to obtain justice for victims of gender-based violence, Segato has persistently drawn public attention to the hundreds of unresolved femicides in Ciudad Juarez, and served as an expert witness in the historic Sepur Zarco trial in Guatemala in which, for the first time, senior members of the Guatemalan Army were convicted of the sexual enslavement of indigenous women as a crime against humanity. In response to the torrent of femicidios that has been sweeping over Latin America, Rita Segato has become an active participant in the Ni Una Menos movement in Argentina.

She calls for a holistic approach to combating gender-based violence that combines reorienting the socialization of boys and men to more positive expressions of masculinity withbreaking down the entrenched structures of inequality that persistently disempower women. Committed to a project of global social solidarity, Segato believes that feminism should not construct men as “monsters”—because they might actually find this power alluring—nor as women’s “natural enemies” but rather as allies in the collective struggle against a white, homophobic, capitalist, militaristic patriarchy. 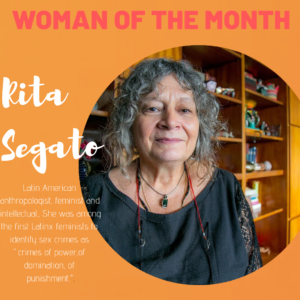