Letter from the Editors

We are truly inspired by the unprecedented wave of peaceful protests that has swept the globe over the past 3 weeks. We acknowledge that there’s a long, deep-rooted history of systemic racism and racial violence in this country, and we need to fight against it, now and moving forward. As WAF’s mission is to seek to raise awareness of pressing women’s and general human rights issues, we believe that the Black Lives Matter movement is important now more than ever.

WAF will continue to learn, listen and speak out against injustice through our platform, social media and podcast.

The conversation isn’t over. 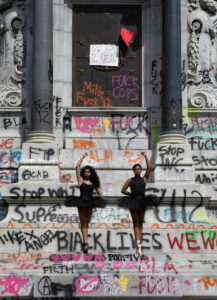 Ballerinas Kennedy George, 14, and Ava Holloway, 14, pose in front of a monument of Confederate general Robert E. Lee after Virginia Governor Ralph Northam ordered its removal after widespread civil unrest following the death in Minneapolis police custody of George Floyd, in Richmond, Virginia, U.S. June 5, 2020. They told Reuters photographer Julia Rendleman the dance community is about joy and collaboration and they were out to do just that. “We are moving forward, ” they said